100 years after Gallipoli slaughter Ireland gives the stamp of approval to its 3,000 dead 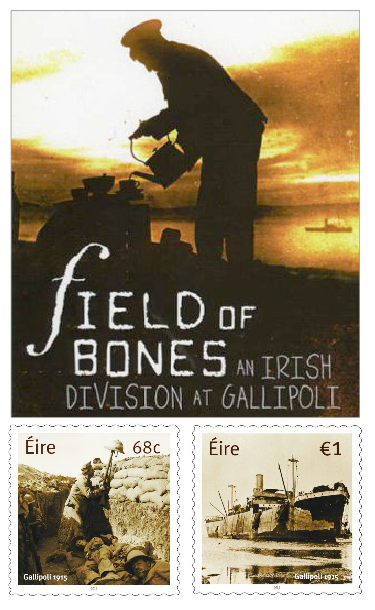 Phillip Orr’s 2006 book was the start of a re-examination of the Gallipoli narrative, the two new stamps are the latest step on the road to understanding

If you’re going into a battle where death is a highly anticipated outcome there are a few things that you would want to square away before meeting your maker. One of them is the notion that your ultimate sacrifice might be at least remembered, perhaps even honoured.

For the more than 3,000 Irishmen who died in the World War I slaughterhouse that was the Gallipoli campaign, the remembering and honouring would take the best part of a century. The 100th anniversary of Gallipoli – the bloody centerpiece of the allied Dardanelles campaign – was observed last weekend at ceremonies in Turkey. President Michael D. Higgins attended, as did Irish Foreign Minister Charlie Flanagan. Before this, there was a remembrance gathering in Dublin.

Gallipoli has long been seen as the brainchild of Winston Churchill. It was not his plan per se, as the strategy of forcing a wedge between the Ottoman Empire and Europe and forcing a passage through the 38-mile wide Dardanelles channel into the Black Sea – thus establishing a sea link to an ally Russia – had been knocking around for a while. But it was Churchill who blew the dust off and ensured that it was carried out. It was not his finest hour.

In the first month after storming the Gallipoli peninsula, the Allies lost 45,000 men. The Gallipoli campaign lasted nine months before the evacuation of the last Allied troops in January 1916. Each side suffered 250,000 casualties with 46,000 Allied troops and 65,000 Turkish troops dead. Most of the Allied dead were British and French, though Gallipoli is particularly remembered as a tragedy for the Australians and New Zealanders. 7,000 Australians died, as did 2,000 New Zealanders. But in proportion to the national populations at the time these were horrifying figures. The extent of the disaster for these two young emerging nations was brilliantly depicted in the 1981 Australian film ‘Gallipoli’, directed by Peter Weir and starring a young Mel Gibson.

The Irish who died were, for decades, lumped in with the British casualties. And as Ireland itself emerged as an independent nation they were largely written out of country’s broader history. Even in Northern Ireland the focus, in a World War I context, was largely on the Western Front and especially the Battle of the Somme in 1916. But in recent years there has been a growing effort to recognize the Gallipoli 3,000 – as well as the many wounded and those who fought and survived – as distinctly Irish. And there has been recognition, too, that many of the ANZAC soldiers had family ties to Ireland.

Much of the credit for the casting of light onto the Irish of Gallipoli goes to Antrim-based Phillip Orr, a former teacher and now military historian. His 2006 book, ‘Field of Bones’, is the Irish answer in book form to Australia’s screen account of Gallipoli. Field of Bones (available on Amazon) tells of how in August and September of 1915 the young volunteer Irish soldiers died on the killing fields of Gallipoli on the Turkish Aegean. According to the book’s publicity release, as a division of Kitchener's Army, at Suvla Bay “they fell to gunshot wounds and shellfire, while thirst, sunstroke and dysentery reduced their chances of survival. Hundreds were burned alive in raging bush-fires. In post-war Ireland political revolution led to the removal of Gallipoli from memory. One popular ballad told the volunteers, ‘You fought for the wrong country, you died for the wrong cause, when the greatest war was at home.’

Based on letters, diaries and archival sources, Orr’s book pieced together the story of the 10th Irish Division, many of whom still lie today in Suvla Bay's fields. Orr’s book was a groundbreaker. It was praised by fellow historians and became part of an emerging acknowledgment in Ireland of the sacrifices of the Irish who fought in World War I, as well as those who fought in Ireland for Irish freedom. All in their own way were fighting for the right of small nations, or a single small nation, to exist freely and independently.

In 1998, the 80th anniversary of the Great War's end, President Mary McAleese and Queen Elizabeth together opened a memorial in Messines in Flanders in tribute to the Irish dead of World War I. It is called the ‘Island of Ireland Peace Park’. There are memorials in Ireland too and An Post has issued two commemorative stamps for those killed during the Gallipoli campaign. The stamps were unveiled last week at Collins Barracks in Dublin by the cast of a play entitled ‘Pals – The Irish at Gallipoli’. The play looks back at the story of the 7th Battalion of the Royal Irish Fusiliers and their experience training before being deployed to the Dardanelles. The stamps are a 68 cent issue that shows Irish soldiers in a trench at Gallipoli and a one euro issue that shows the SS River Clyde, a boat that ferried troops to the fighting in Turkey. In the ways that nations elevate and acknowledge events in their past, issuing stamps is no small matter.

This, too, is no small matter.