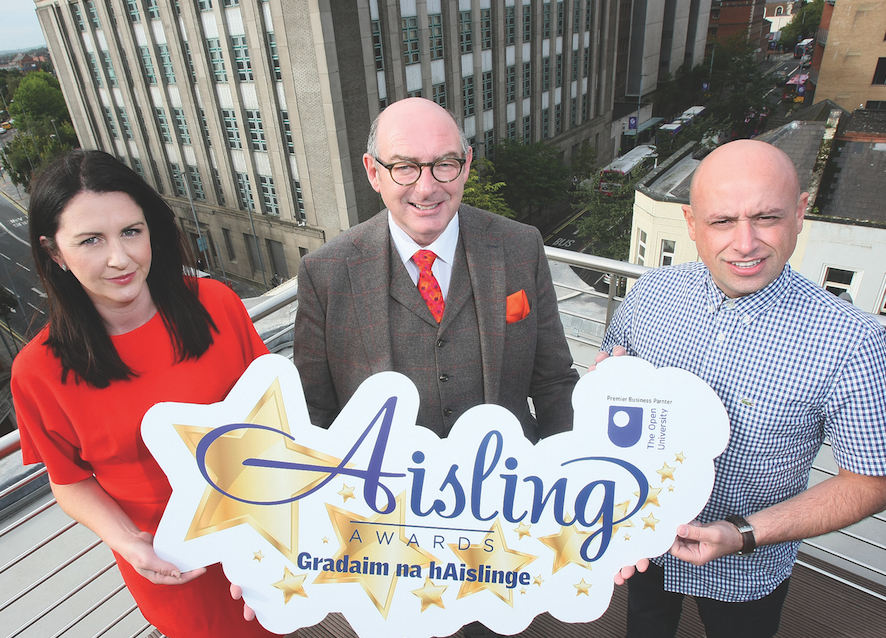 WE are thrilled to announce the shortlists for this year’s Aisling Awards.
Now in its 22nd year, the inspirational Aisling Awards remain the biggest and most ambitious awards ceremony in Belfast, rightly dubbed the ‘Belfast Oscars’.
Guest speakers in the past have included black civil rights leader Rev Jesse Jackson, President of the New York City Council Christine Quinn, President of Ireland, Michael D. Higgins, Minister Martin McGuinness, John Hume and Taoiseach Enda Kenny.
The 2018 shortlist are as follows:

The Positive Belfast Award. Awarded to those community organisations and leaders who are striving to leave a constructive and lasting impression on an ever-changing city.
• Féile 30
• Primark Small Traders
• Door of Mercy Soup Kitchen supported by St. Patricks, Donegal Street.
• Businesses for Love Equality

The Outstanding Achievement in Sport Award. Voted by the public and presented every year to the person or team that gave us our biggest sporting memories over the past 12 months.
• Newington FC
• Crumlin Star FC
• Willowbank FC
• CJ Fulton (St Malachy’s College & Belfast Star Basketball)
• Bredagh GAC

The Outstanding Contribution to the Irish Language Award. Celebrating the vibrancy and uniqueness which the Irish language brings to the city of Belfast, this award will honour a person or group which works tirelessly to pioneer the language.
• Ionad na Fuiseoige
• Bunscoil an tSléibhe Dhuibh
• Ciste Infheistíochta na Gaeilge
n Ráidió Fáilte

The Fáilte Award for Hospitality and Tourism. Celebrating the business that is making the biggest impact in one of the city’s fastest growing sectors.
• Lord Diljit Rana of Andras Hotels
• Friendship Four
• Taxi Trax
• Kelly’s Cellars
• The Balmoral Hotel

The Small Business Big Impact Award. Small businesses are the backbone of the Belfast economy and we will be recognising the small business in the city which is making the biggest contribution.
• Fusion Antibodies plc
• HannawayCA
• Stellify Media
• PURE FITOUT

Roll of Honour Award:
• Northern Ireland Fire and Rescue Service
• The Aisling Person of the Year Award:
• Will be announced on the night.

A huge thank you to our sponsors: Open University (premier partner), Ulster University, The Kennedy Centre, Sean Grahams, Mercury Security, Ulster Bank, Foras na Gaeilge, TG4, Belfast International Airport, Movie House Cinemas and Newspread.
Good luck to all of our wonderful nominees and we look forward to celebrating with you all on October 18 in the Europa Hotel.
John D’Arcy of the Open University said: “The Open University is delighted once again to be premier partner of the Aisling Awards. Congratulations to all the individuals and organisations who have been shortlisted and good luck. See you on the 18th October at the awards night.”