Kilkenny will be top Cats once again 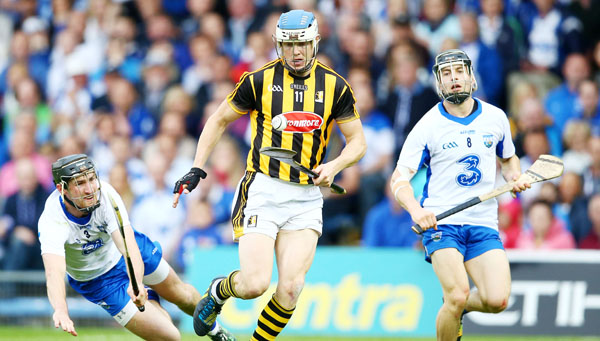 FIRST GOAL: Kilkenny's TJ Reid, pictured in action against Waterford in the semi-final replay, is good value at 6/1 to bag the first goal in Sunday's All-Ireland SHC final against Tipperary in Croke Park

THE All-Ireland Senior Hurling Championship final takes centre stage this Sunday at Croke Park as defending champions Kilkenny face Tipperary and we have signed up our GAA tipster Paddy Tierney to review the weekend game.

The sides have built up a fierce rivalry in recent times with Tipp famously stopping Kilkenny’s ‘drive for five’ in 2010 before the Cats gained their revenge by winning the Liam MacCarthy the following year. Brian Cody’s men also won the 2014 decider after a replay and beat Galway by four points in last year’s final.

Yet, despite their remarkable pedigree, Kilkenny still have the capacity to surprise and amaze. They showed their trademark grit and determination to edge out Waterford in their semi-final replay in Thurles.

The Tribesmen lost star forward Joe Canning to injury midway through that game. Had he stayed on the field, the result might have been different. In any case, it is hard to see past Kilkenny as they have a remarkable will to win, but a close game is almost certain.

Sean Graham Bookmakers cannot separate the sides with both priced at 11/10. The 2012, 2013 and 2014 finals all went to replays and I couldn’t put anyone off having a small punt on the draw at 10/1. However Kilkenny to win by between one and three points at 4/1 is the bet that most appeals.

I also like the look of TJ Reid for the first goal in Sunday’s final. He obliged when tipped up at this stage last year but he hasn’t scored a Championship goal since. However, Ballyhale Shamrock’s clubman has still scored 0-38 in four matches so he is still playing well and, at 6/1, he looks a decent price to bag the first goal while the scorecast of Reid first goal and a Kilkenny win a tasty 10/1.

We have World Cup qualifiers from Sunday onwards so just domestic action to get our teeth into on Saturday. We start with the weekend quad and we head to League One and it’s hard to ignore Bolton (8/11) at the minute. We are taking them to bank all three points at home to Southend and extend their lead at the top. Colchester (1/1) won at Wycombe last weekend and can follow up against Exeter while Luton (10/11) could go top if they can beat Wycombe. Making the weekend quad up is Mansfield (11/10) who can maintain their solid start with a win over basement club Cambridge.

We are due with the Goalrush and we suggest both teams to score in the following games: Wimbledon v Chesterfield, Oxford v Rochdale, Carlisle v Accrington, Crewe v Doncaster, Morecambe v Leyton Orient and finishing with the Plymouth v Cheltenham battle.

PG DRAW TRIXIE After hitting the bar for the last two weeks with 12/1 doubles, we hit the draw trixie last weekend to the delight of our followers who follow this bet religiously every week - 36/1 WINNER. We hope to follow up and suggest you sit on the fence and take draws in the following games: Millwall v Bradford, Oxford v Rochdale and finishing with the Crewe v Doncaster game.

Follow all the PG Tips this weekend on Facebook/Twitter