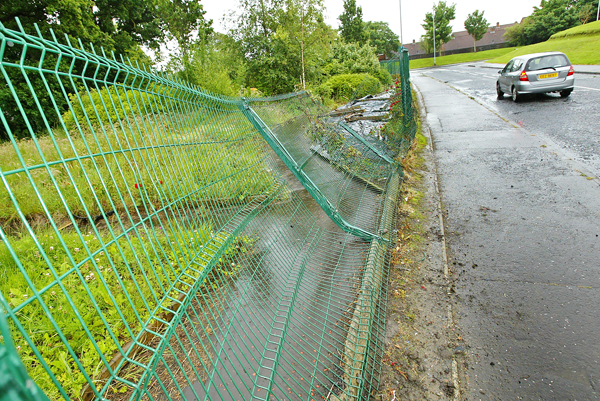 The damage caused to the Poleglass community garden exterior fence

A 28-year-old man has been charged with driving with excess alcohol on his breath, no driving licence and no insurance after a suspected stolen car ploughed into Belle Steele Community Garden around 6am on Sunday morning.

Four fencing panels and flowerbeds were destroyed in the early morning collision at the popular Colin community amenity, which was started almost 15 years ago by the late Sinn Féin Councillor Michael Ferguson.
Speaking to Daily Belfast, Chair of Colin in Bloom, George Rogan, said the person responsible for causing the damage should pay for it.
“The garden was established in 2002 and was a project started by the late Michael Ferguson and local pensioners and opened by Bairbre de Brún,” he said. “We have had a few incidents over the years of anti-social behaviour but nothing on this scale. Four panels from the garden were completely obliterated and this is going to be a big job to repair.
“I got a call from a local taxi driver around 6am telling me what had happened. The car had been seen in the area and the PSNI had been in pursuit. The car obviously lost control and crashed into the fence. These are solid posts so I don’t know how the driver was able to walk away from it. They should be made to pay for the damage. This shouldn’t be a cost to the public, it should be part of their penance.
“Lisburn City Council had been fantastic in terms of supplying plants to us and the Michael Ferguson roundabout and I have been in contact with the BRO (Belfast Regeneration Office) whose staff hope to have repair work completed by the end of this week.
“We have had great support since Sunday and whatever help is needed we know it’s there.”
The 28-year-old male has been bailed and is set to appear at Belfast Magistrates Court on July 29.

Got a local story? Contact Ciara Quinn at c.quinn@belfastmediagroup.com