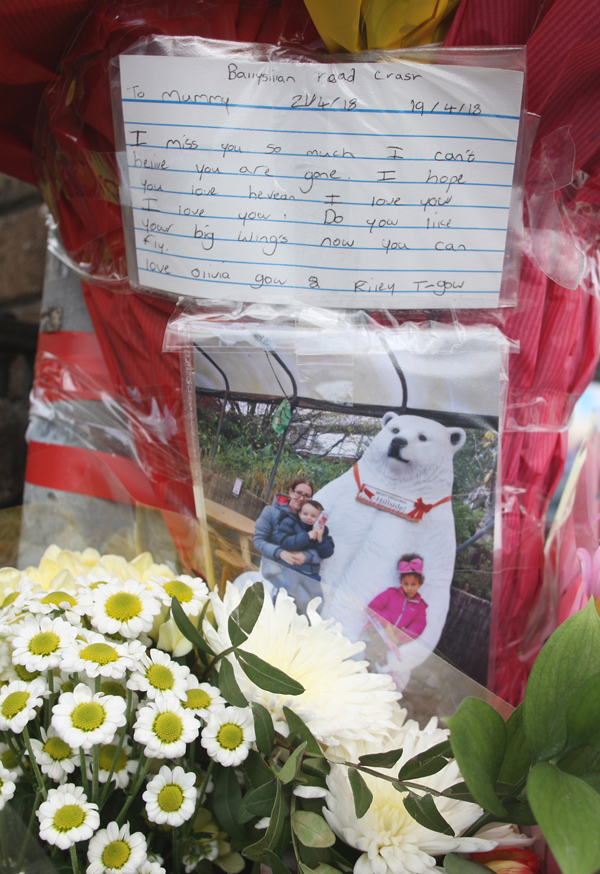 A floral tribute to her mummy, Lisa Gow died after she was hit by a stolen car on the Ballysillan Road

THE funeral of a mother-of-two killed by a stolen car in North Belfast will take place today as her family say they have been left “deeply saddened and hurt by the loss of a beloved daughter and sister”.
Lisa Gow died after being hit by a stolen car on the Ballysillan Road on Thursday morning. She had been walking along the footpath when she was struck shortly before 11am.
In a statement released through local DUP Councillor Dale Pankhurst, the family described Lisa as a “loving, caring and devoted mother to her two children, Olivia aged eight and Riley aged five, along with her partner John.”
The family continued: “She was a daughter and a sister who was full of joy, full of energy, and full of love for her family and friends.”
Family and friends of Lisa will gather at St Andrew’s church in Glencairn at 1.30pm and afterwards there’ll be a service at Roselawn Crematorium at 3.30pm.
The Police Ombudsman is investigating the circumstances of a police chase of the stolen car that hit Lisa.
Police said that their pursuit had ended before the fatal crash. However, the police watchdog said video footage showed police were “a matter of seconds” behind the car when the tragedy happened.
39-year-old Martin Alexander Nelson from Ardoyne Road appeared in court on Friday charged with causing death by dangerous driving and other offences. He was remanded in custody until May 18.