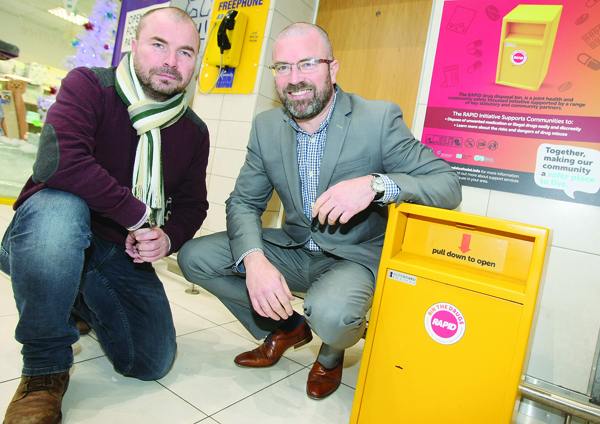 DISPOSED: Fra Stone of the Falls Community Council and Kennedy Centre manager John Jones welcome the news that more people are disposing of prescription or illegal drugs in the collection bin

THE BATTLE against prescription drug abuse in West Belfast claimed a small victory this week when over 5,000 tablets were collected from the drug bin in the Kennedy Centre.
The RAPID (Remove All Prescription and Illegal Drugs) bin in the Kennedy Centre has proved a great success with Centre manager John Jones calling it a great success.
Speaking to the Andersonstown News John Jones, said: “The drug bin in the centre has proved to be a great success, it's perfectly placed and people can drop tablets into it discretely without drawing any attention to themselves.
“The Kennedy Centre has always had the community at heart from day one, so we are absolutely delighted to have played a small part in having these tablets removed from the community.
“The scourge of prescription drug abuse has plagued our communities for too long now and we see this as a small victory in the fight to get drugs and prescription drugs off our streets."
The RAPID drug bins have three main aims:
n Removal of prescription, illegal and new psychoactive substances (often referred to as ‘legal highs’ and now illegal following the introduction of the Psychoactive Substances Act in May 2016) from communities;
n Provision of information and support to individuals, families, local businesses and community organisations to raise awareness of the effects and risks of using/misusing illegal and/or prescription drugs;
nBringing together community and statutory agencies, local businesses and the general public under the RAPID initiative to work towards making their local community a safer place to live.
Fra Stone, Family Support Worker with the Falls Community Council, said: “We welcome the disposal of this significant amount of drugs in the drugs bin in the Kennedy Centre.
“People are becoming more aware of the dangers of misusing prescription drugs, and I would appeal to anyone who has any drugs to dispose of them in this bin, or the one that is located in the foyer of the Falls Community Council.
“The more drugs we can take out of circulation the better. If anyone has any queries about drugs, if they are worried about themselves or a loved one, we urge them to contact the Community Drugs Programme by phone, or just call in. Our number is 90202030, and our office is located on the Falls Road opposite Willowbank Park.”