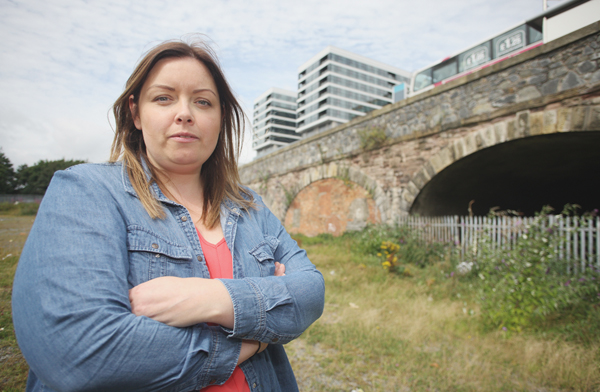 A new £55m office development building in South Belfast was given the green light from council planning officials last night despite fears by Market residents that the mammoth buildings will overwhelm nearby residential properties.

The office and retail development, due to be built beside Central Station, will consist of four buildings. Earlier this week, South Belfast Sinn Féin Councillor Deirdre Hargey hit out at proposals for the two large office blocks, claiming they will “disconnect” residents from the keenly-awaited Market Tunnels development.

Councillor Hargey said: “The local community in the Market area have significant concerns over the proposed Stewart Street development. The sheer scale of this proposed development is unsuitable for the area and has alarmed local residents. It is simply not appropriate to build tower blocks at 10 and 14 storeys tall overlooking two-storey homes.

“I along with residents have serious concerns that this development proposal would disconnect the Market community from the Tunnels project and also from the Waterfront and the river walkways and so on.

“We believe the planners have made the wrong decision and didn't make the decision based on their independent design advice in proposing that the committee allow this development. We also feel this development is against current planning policy for this area.”

The development will provide investment of £55 million and help to meet the significant demand for Grade A office space in the city centre, say the developers, who claim it also has the potential to create 2,500 jobs.

Councillor Peter Johnston, Chair of the Planning Committee, said: “This development will regenerate a city centre brownfield site, provide much needed investment for the area and create a street with retail units which will enhance the vitality and viability of the neighbouring Tunnels community project by increasing footfall.

“The quality of public space will be improved with the creation of a central landscaped plaza which will be accessed from Stewart Street and East Bridge Street. This kind of development is vital in helping to transform Belfast and attracting further investment.”

Planning permission at Tuesday night’s meeting was also granted for a building on the junction of the Westlink and Divis Street to house Raidio Fáilte’s Irish language broadcast, training, recording, archiving and community facilities, and for the construction of a new building to facilitate community group activities to the rear of properties along Ava Avenue, Delhi Parade and Haywood Drive, off the Ormeau Road.

The Planning Committee also gave the green light to the construction of a temporary inflatable exhibition space in Queen’s Road, Titanic Quarter.