A long, hard road for the families 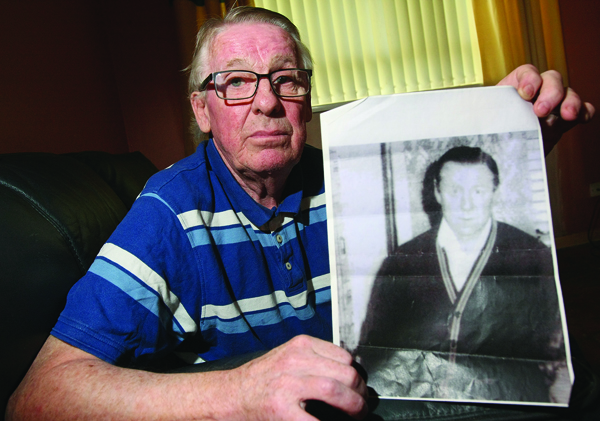 John McKerr was a father-of-eight, a hard working man from the Andersonstown area.

During August 1971 Mr McKerr was working as a joiner in Corpus Christi Church. On August 11th he stepped outside of the church to allow a funeral to pass when he was shot in the head. Another victim of the Parachute Regiment.

He died in hospital nine days later. He was 46-years-old.

The Andersonstown News met with John McKerr’s son Michael to hear his memories of that heartbreaking time for the family.

“I had just turned 15, I remember I was on the train coming back from Dublin with my aunt Lily and aunt Aggie. We were heading to my mother’s house,” he said. “When we got into the Great Northern station my uncle Billy met us and told us that my Da had been shot in the head, he said he didn’t know his condition.

“Everything went haywire, the journey to my mother’s house took forever, everything was going through my head and my aunt Lily was just trying to console me.

“We got to my parents house in Andersonstown Park West and all the family had gathered there, my mother was very upset, everyone was just hugging each other, comforting each other.”

Describing his father Michael said: “My Da only had one hand, he lost his right hand while he was in the army. He had this big steal stump which he fastened around his neck. He could fit all his tools into it, he was as strong as a bull!

“I remember I would watch him sharpening his tools, he had a saw horse out in the hall, he would show me how to do it. He was a very strict man, if you weren’t in by a certain time he would be out after you and God help you when he got you.

“He enjoyed a bottle of Guinness. I would be sent down to the wee nook at McEnaney’s with the empty bottles to get the penny back.

“He would also send me to the bookies on a Saturday with his bet, I would have to ask someone to do it for me. One day this guy took the bet and the money and never came back. I ran home and told my mother, she managed to scrape the money together and sent me back to put the money on again – I don’t think the horse won in the end!”

Michael said that when his father died “we all made sure we looked after our mother”.

“It was a very tough time for her, so the older ones tried to make sure she had enough money to make ends meet.

“My Da lived for nine days after he was shot. Everyone was going to visit him in hospital but I couldn’t bring myself to go, I didn’t want to see him like that with bandages round his head.

“I remember when he died the house never stopped, I took myself off round to my mate’s house. We went to Ballymurphy and rioted, my Ma begged me not to go but my attitude was ‘no way, my Da has been killed’. I didn’t know what else to do.”

Michael said his mother Maureen “was in a daze for a long time” after his father’s death.

“Eventually everyone had to get back to their own lives and I think that’s when it hit her. My aunt Aggie ended up moving in with her to keep her company. We were very grateful that she had someone with her.”

Years later Michael was at a forgotten victims event in Conway Mill when he met the rest of the Ballymurphy Massacre victims’ families.
“I met John Teggart and became involved in the campaign from then. It has been a long, hard road for us families and I just hope that we finally get justice for our loved ones.”