After a lifetime of writing Jim has his stories published 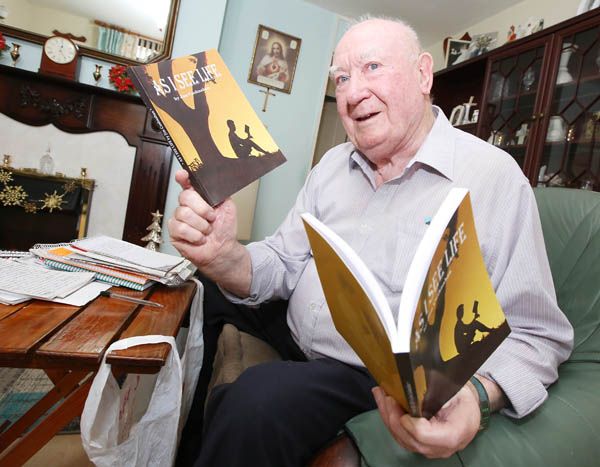 A LENADOON pensioner has had a collection of his short stories and poetry published after a friend uncovered his collection and had them printed.
‘As I See Life’ is penned by 86-year-old Jim Cushnahan who began to immerse himself in his passion for writing to fill his lonely evenings after he moved to Australia in the 1950s.
“It was the last year of the Second World War and back then it was out of school Friday, out to work on Monday. I was just 14-years-old when I became a docker. Then when the war ended there was no work going for me here so I went out to Australia as part of the £10 scheme – it took 33 days by boat to travel across,” he recalled. “The jobs were out there, but you didn’t know as many people as back home. You didn’t have your friends or family to see and so I began to write down what I saw during the day into short stories and poetry in the evening to pass the time.”
Jim remained in Australia for over 25 years before returning to Belfast in 1979. It was then he met his wife Betty before they returned to Australia until they once again returned back to Belfast to enjoy their retirement.
Jim explained he still sticks to his habit of writing in the evening.
“I only write at night, that way Betty gets peace to watch the TV while I reflect on the things I came across during the day and get it down on paper.
“I was moving house to house so my books went missing, so when I returned to Belfast I kept up the habit and the collection is growing again.”
Opening a drawer he produced writing pads explaining this is what eventually became his first published book.
“I had 21 writing pads last Christmas, and it’s safe to say there’s a good few more now,” he laughed.
Family friend Brian Madden discovered the collection during a visit to the home and after a few months he suggested the writings were good enough to be published.
“Brian himself has published two books already, he was talking about book signings and other things which just isn’t me so I let him take charge and the outcome is beautiful.”
When publishing the book Brian decided to depict each writing in art form alongside each script, created by local artist Patrick Hickey. He confirmed Jim probably has enough material for a second book but encouraged people to read and enjoy his first one while it’s hot off the press.
“For far too long Jim has hidden his extremely bright light under a bushel,” said Brian, “but at long last he has decided to put his thoughts on life in general into verse and short stories to have them published in book form.
“Jim has the extraordinary gift of studying people – should they be walking on the street sitting in a restaurant or bar or chatting on a street corner- and within thirty minutes or less write a poem or short story of the utmost quality about them.”

Howling winds and freezing rain
beating on the window panes,
Darkened sky, the rumbling roar of thunder,
flash lightening, which lights up the sky, showing brightness everywhere;
Dogs barking and crying with fear, cracking branches and falling trees crashing to the ground;
This is the sound of a winter snowstorm that lasts ‘til morning,
Darkened clouds move on, leaving a brighter sky,
the roaring wind has sent away
There is just a breeze;
But there is a coldness in the morning light,
and squawking magpies on the branches of the leafless trees.
They seem to be the only birds around;
Very soon winter will go away and the beauty of spring will show itself everywhere you look
At this time of the year.