All eyes on the Dublin Festival of Racing 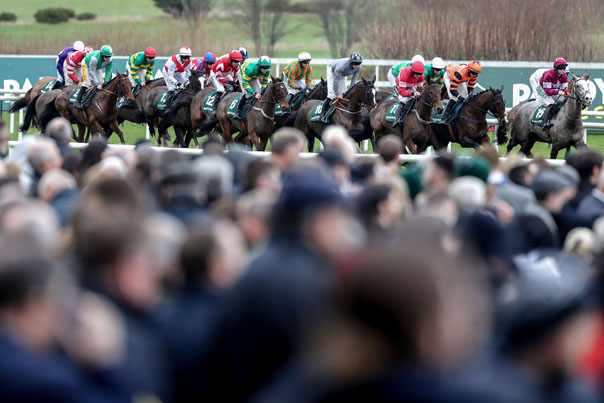 THE PG heads off to a sunshine winter break to Benidorm today to recharge the batteries before Cheltenham fever descends.

Dates for the Diary
Already penned in dates for the PG 2019 diary, first up is the Sean Graham Bookmakers Cheltenham Preview Night on Monday 4th March at the Europa Hotel.
The Sean Graham Racing Club is hoping to start it’s season at Leopardstown on Sunday March 3rd - more information in February on this.
Cheltenham Friday with the PG wiill be held in McEnaneys on Friday 15th March - usual free Sean Graham bets, competitions and some complimentary food from the local bar.

SIX NATIONS
Right let’s get on to the weekend punting action and we start with the Six Nations and only place to start is the Ireland v England game on Saturday evening.
We are taking tournament favourites Ireland to win 11-15 pts at 9/2 in this one with Keith Earles a value bet at 9/1 for the First Tryscorer.

Weekend Racing
Cheltenham Festival clues will be given out at the brilliant Dublin Racing Festival at Leopardstown on Saturday and Sunday - weather permitting.
We start with the first Grade 1 of the weekend, the Lacy & Partners Solicitors Novice Hurdle (12.50) and looking forward to seeing the unbeaten Gordon Elliott trained Battleoverdoyen in this one and he could give favourite backers a solid start.
Up next Ladbrokes Dublin Chase (1.25) and Willie Mullin as usual has a strong hand in this and we expect Footpad to reverse that run with Simply Ned around here at Christmas.
The Grade 1 Frank Ward Solicitors Arkle Novice Chase (2.00) is next up and Gordon Elliott could send hat-trick seeking Hardline who out-battled Getabird last time out for this one and he could upset potential favourite Le Richebourg who created a nice impression here when winning the Grade 1 Racing Post Novice Chase but the 11/1 looks a bit skinny.
All eyes on the BHP Insurance Irish Champion Hurdle (3.00) and likely favourite Apple Jades will face 6 rivals on Sunday and it’s hard to look by her after scooting up 3 times this season and the drop back should not hinder her chances on Saturday.
On to Sunday at the festival and we start with yet another Grade 1 race with the Tattersalls Ireland Spring Juvenile Hurdle and Sir Erec the midweek favourite at around 13/8 and renew rivalry with Tiger Tiger Tap who he beat on debut.
Coeur Sublime (11/2) looked all set to win in a Grade 2 here before toppling at the last and looks better value than the front 2 in the betting.
The Grade 1 Chanelle Pharma Novice Hurdle (1.50) and local interest in Aramon in this one and let’s hope he can follow up on that smooth Future Champions Novice Hurdle success in December - danger could be Felix Desjy who is good place value at 10s.
The Grade 1 Flogas Novice Chase looks a cracking novice chase and we are taking English raider Le Bague Au Roi to upset the jolly Delta Work. The Grade 1 Unibet Irish Gold Cup (3.35) is the big race of the day and all eyes will be on the sketchy jumping of Road to Respect who threw his chance away in the Savills Chase in December when finishing 3rd behind Kemboy. If gets a clear enough round then we expect the Noel Meade horse to reverse that form come Sunday.

MONAGHAN pulled off the result of the weekend when they defeated All-Ireland champions Dublin in Clones and I fancy them to follow up with a win over Roscommon this weekend.
The Connacht side narrowly lost out to Mayo on Saturday night and I think they’ll struggle in the top flight this season.
Malachy O’Rourke’s men are 8/15 to win and I think they could prove a decent punt at Evs minus two points.
Kerry also made a winning start to their Division One campaign with a four-point win over Tyrone. They travel to Kingspan Breffni Park on Sunday and are a good price at 11/10 minus three points.
Tyrone will be keen to secure victory in their first home game of the season when they host Mayo on Sunday and can seal a half-time/full-time victory at 11/8.
I also fancy Armagh (8/11) to win half-time/full-time against Clare on Sunday having gained a point in Kildare last weekend.
Finally, Antrim were unlucky against Derry last Sunday at Corrigan Park, but they can get off the mark away to Wexford this weekend and are 11/10 to do so with this weekend’s acca paying a healthy 35/1.

Tom Brady should shut up. Before his Patriots took the field to play the Chargers in the AFC Quarter finals two weeks ago, he (supposedly) told his players this would be his last home game.
His team came out fired up, and played a perfect first half of football and the game was never in doubt.
Last week, he was non-committal on his future again, and heading to Kansas City to play the favoured Chiefs, his teammates came out fired up.
His buddy and favourite target Julian Edelman printed up t-shirts that said 'Bet Against Us" and no doubt, which had his team feeling like they were true underdogs, and they were finished - the dynasty over.
If you bet against Tom Brady - you lose. You usually lose. However, Brady was asked yesterday what was the chance that Sundays final would be his last game. "Zero."
He should have led us and everyone to believe that he would retire after the Superbowl, Surely at 41 years old, he can't go on anymore. Chiefs, Steelers, Ravens and basically fans of the other 31 teams would be happy to see him retire, and stop hogging all the rings.
Why retire, when you can basically take the regular season off, play the terrible teams in your own division twice a year, make sure the referees don't let anyone knock you down, and play two playoff games before taking the stage in another Super Bowl? He says he wants to play 4 more years. His playoff stats are ridiculous. Nine Super Bowl appearances. 17 AFC Championship games. 10 straight division titles.
I suppose I should mention the other team playing in the Superbowl - the LA Rams. Yes they spent big money to get here, yes they have Aaron Donald, and wonder-coach Sean McVay. And even though I was born in Los Angeles, I have a hard time taking this team serious. They looked finished in the beginning of the Saints game, only to find their composure, and with the help of the referees, they won in New Orleans. But this game is something different.
The Patriots have a whole different playbook for the Superbowl. They've been there before, again and again. The high powered Rams should keep it close, but don't bet against Tom Brady.

Weekend Soccer Selections
Weekend Quad
On to the football and we start with the weekend quad bet and we take wins for West Brom, Peterborough, Hamilton and Inverness - the quad pays around 15/1.
Weekend DRAW TREBLE
Hoping all these games end all square; Brighton v Watford, Burnley v Southampton and ending with the Cardiff v Bournemouth game - pays around 35/1.
Weekend ACCA
On to the odds-on acca and we side with Mansfield, Millwall, Sheffield Utd, Peterborough and Sunderland - pays around 9/1.
Weekend BTTS/Overs (2.5 Goals)
Looking goals galore in these games; Crystal Palace v Fulham, Burnley v Southampton, Birmingham v Nottingham Forest, Shrewsbury v Luton Town and finishing with the Exeter v MK Dons game.
BTTS score pays around 16s and the Overs Bet close to 28/1.
Bet what you can afford, do not chase losses. Follow our betting motto of bet small, win big and remember one vital thing, the bookie always wins - never let anyone tell you different.