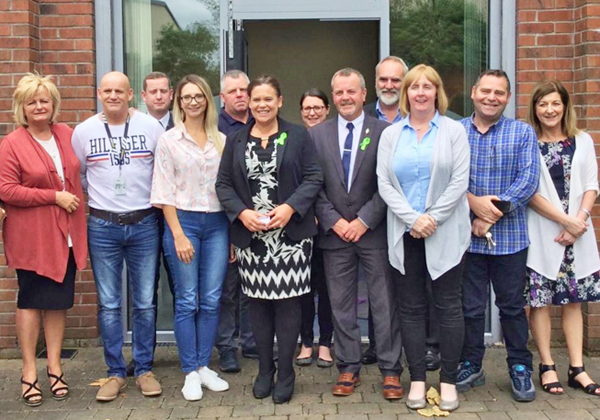 The Dublin Teachta Dála said she was in Belfast to deal with issues affecting all communities across the island and looking at how a joined-up strategy can be developed.

Her visit came as investigative journalism website The Detail uncovered statistics that showed 2015 had the highest number of suicides recorded in the north since records began – 318.

Deputy McDonald was accompanied by fellow TD Pat Buckley whose two brothers took their own lives, leading him to form the mental health charity the Let’s Get Together Foundation. Mary Lou said there was a major challenge to everyone regarding mental health.

“We have a lot of work to do,” she said. “There are huge issues right across our communities but they’re not bigger than us. There’s nothing we can’t address, nobody we can’t support – reach out for help if you need it.

“I’ve met fantastic community and voluntary activists here and of course the statutory agencies have a part to play. We have lots to do, I know we have the people to do it, the energy and the will, and today has been a very important first step.

“Behind all these statistics are real people, families who are still hurting and lives left shattered. It is abundantly clear from talking with those community representatives that we face a crisis in death by suicide and self-harm in the north and this mirrors the situation right across Ireland. Local people know what’s going on and we should listen to them.

Pat Buckley, Sinn Féin’s spokesperson on mental health and suicide prevention, said he was confident that progress could be made on the issue.

The noted local campaigner Philip McTaggart, who attended the meeting, said there was much to be gained from an all island approach.

“It was great to see Mary Lou and Pat – who knows only too well about the impact of suicide – up in Belfast on this fact-finding mission.

“There is a lot of research being done both north and south but what we don’t want to be doing is duplicating this when there are limited funds.

“Through working together we can learn more about how to deal with ths issue of mental health and suicide. The figures show that 21 people are dying a week through suicide. If that were road fatalities there’d be a huge outcry and that is what we need for mental health.

“This visit was the first step in building relationships and what we need now is a strategy to tackle the issue.”

Irene Sherry from Bridge of Hope, which hosted the meeting, said the issue needs highlighted.

“Suicide claimed the lives of 55 people in Belfast last year and so far this year we know even more families have lost loved ones,” said Irene. “Our efforts to establish a cross-departmental community- focused task force have been building in recent months and we are very keen to see this move forward. It was extremely worthwhile to hear from Mary Lou and Pat on efforts across the island of Ireland and share our experiences locally.”