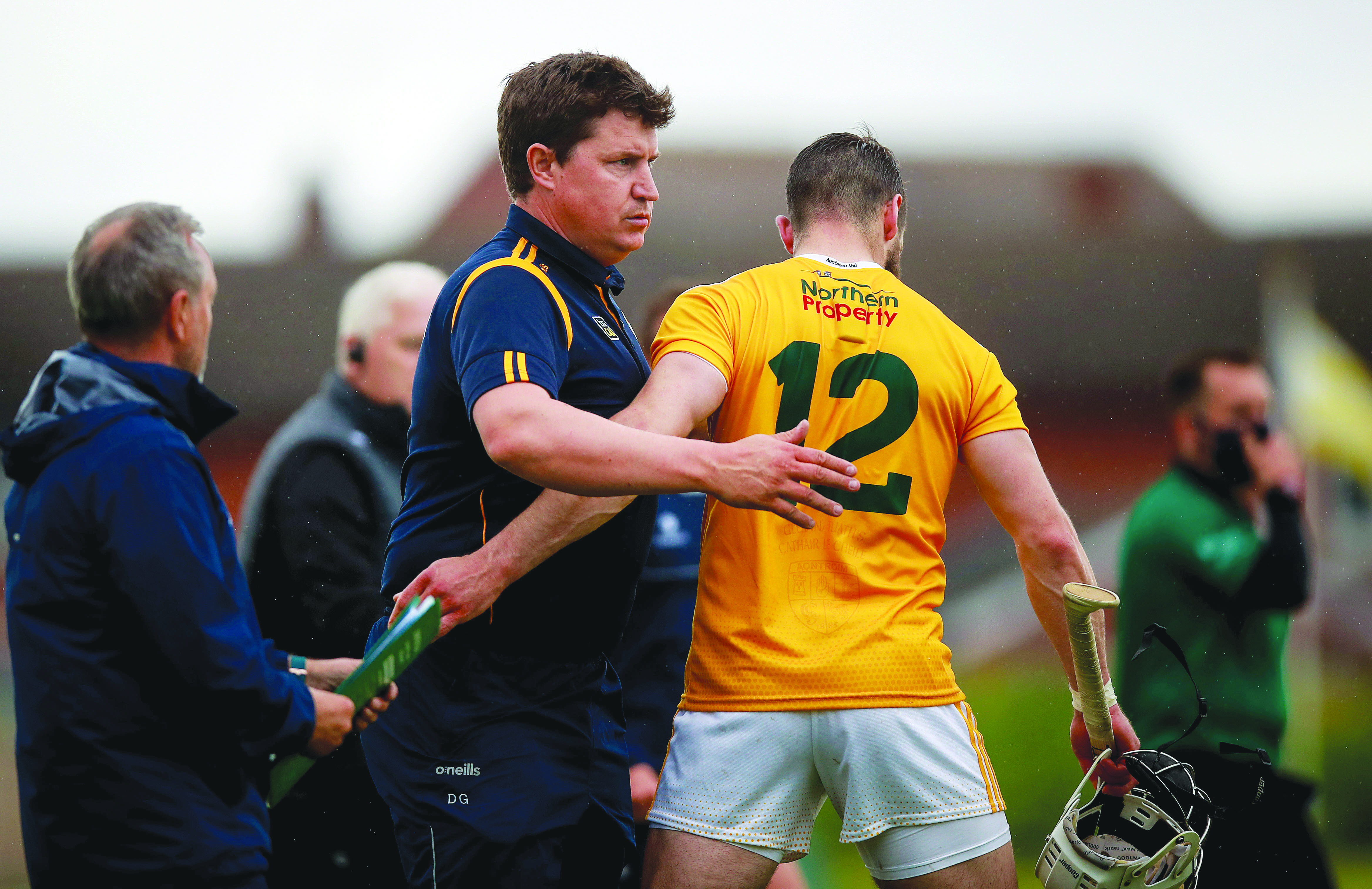 AT the outset of the National League, many would have circled Antrim’s final game at home to Laois as one that would likely decide who would stay up and who drops into the relegation playoff.

A prediction that the Saffrons would have already done enough to consolidate their place would have been greeted with raised eyebrows in some circles, but that is the case as they get ready to welcome the O’Moore men on Saturday in what is now a dead rubber.

Over the course of the past five weeks, Antrim have proven they are right at home in the top-flight and have deservedly ensured they will be back in Division One for next season.

Darren Gleeson’s charges have been fearless in their approach, getting off to the best possible start with a win against Clare, before heading to Nowlan Park and putting in a commendable performance against Kilkenny.

It proved to be a difficult afternoon at Dublin - who they meet again in the Championship in a fortnight and now have a weekend off before that game - but recovered to secure a fully-merited draw against Wexford last weekend that ensures they stay up.

Seamus ‘Cheddar’ Plunkett will bring the Midlanders to Belfast this weekend knowing they will be out against Westmeath the following week with the loser relegated, but they have been a thorn in the side of Antrim on recent years with the Saffrons having to go all the way back to 2015 for their last win.

“The week off will feel like two or three because that’s what last week felt like,” said Antrim manager Darren Gleeson who insists this game is as important as others they have played as they aim to build momentum ahead of the Leinster Championship.

“Laois will be coming here to get something out of it as they are getting ready to play Wexford (in the Championship).

“They will be two weeks out and will have lads putting their hand up for that. They will come here all-guns-blazing and Antrim know they have never got anything easy off Laois.

“We are like other teams in the division and building towards Championship, so we use the League for that purpose.

“Consolidation of status is obviously important, but we will treat Laois with the same respect as they will of us. We’ll go hammer and tongs preparing for Laois this week because Dublin is in the distance - we can only live for today.”

Antrim had to battle back from a slow start against Wexford as the concessional of early goals meant they were chasing the game.

This has been something of a theme of the campaign as they have gradually settled into games.

That is one aspect they are working to improve on, but there is also the positive that they have the mental toughness and physical fitness to last the course.

“We are slow to start but strong to finish, so you can look at it either way,” Gleeson countered.

“Maybe we conserve it (energy) a small bit for the late push, but in all seriousness it’s something we’d have to look at. You’d still have to be impressed with how we are finishing.”

A good start and 70-minute performance will be the objective on Saturday, but with the pressure off in terms of relegation, it may be the case that some of those players who have been pushing hard getting an opportunity to start.

Conor McCann, Michael Bradley and Domhnall Nugent were missing due to injury against Wexford, with Ciaran Clarke sprung from the bench.

Gleeson insists that some changes were down to players’ performance in training so he may be tempted to make a few changes in an effort to see what players can do with Championship around the corner.

“Eoin O’Neill has been very unlucky not to start at other times. We have been working on that since the McDonagh Cup last year more than we have seen this year.

“We have only six weeks of information as we weren’t out before the restart date, so we are short on those lads but as the weeks go along, we’ll learn more about them.”