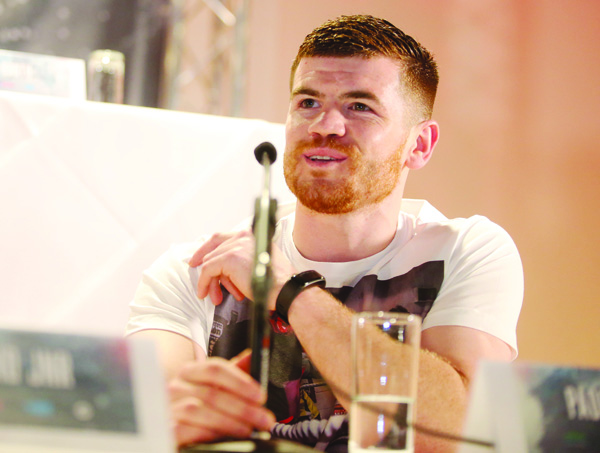 PADDY Gallagher returns to the ring this Saturday for the first time since his British welterweight title eliminator defeat to Tamuka Mucha in November when he takes on Craig Kelly (9-10-1).

The 28 year-old Lenadoon man has changed things up since that loss at Wembley Arena, with his original training team of Gerard McManus and Daniel Anderson back on board and a management deal inked with Matthew Macklin’s MTK outfit.

Gallagher still holds the Celtic welterweight title, but his ambitions are higher and he is hoping to get back in the groove against the 34 year-old Scot who has a defeat against William Warburton – a man Gallagher defeated twice – before looking to get back into the British title mix and see how far he can take his career.

“Some people go and win a British title and say ‘ah that’s all I ever wanted’. But I want to go as far as I can up to world title level if I can,” he said.

“I just want to fight for a title again. I’m obviously not fighting for a title here, but I’m ranked number eight (in Britain) coming off a defeat and that’s a good thing for my record. Two more wins and that could get me up inside the top five and that’s with Kell Brook, Amir Khan, Sam Eggington and Bradly Skeete ahead of me. They are good names to be ranked up by, so hopefully with a couple of wins I can fight for a British or Commonwealth, even European or world, why not?”

Why not indeed. The occasion will certainly not overawe Gallagher who is a man who loves the big stage and is used to the glare of the TV cameras.

The former Commonwealth Games gold medallist says he is in a good place now and with the backing of MTK, is confident he can get the regular action and career progression he has been crying out for.

“I wanted something like this from the start,” he stressed.

“I had the trainer I wanted, but never had the backing from a manager until now. I have signed with MTK and I’m back with my trainers, ‘Dan the Man’ (Daniel Anderson) doing my strength and conditioning, lads doing my nutrition and Gerard (McManus) training me. This is everything any boxer would want, a great team around me who have my best interests at heart, so I’m very happy.

“These are the kind of shows everybody loves, but I love especially. I’m loving it and looking forward to showing the changes I have made in training.”