An Dream Dearg call for meeting with Brokenshire 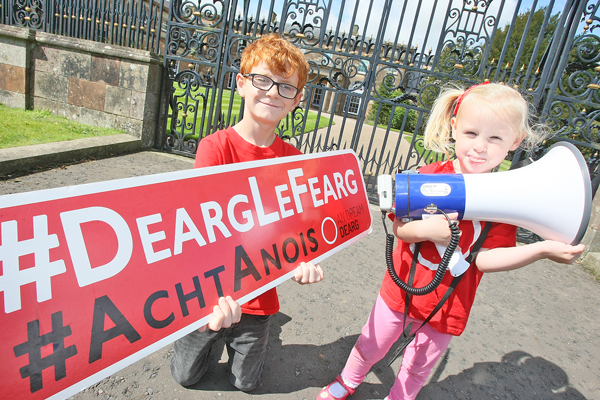 A DELEGATION from the Irish language community travelled to Hillsborough Castle yesterday (Tuesday) to highlight the call for an Irish Language Act.

Over 60 people, a majority of them teenagers and young people from Irish language primary and secondary schools, were in attendance at the official residence of Secretary of State, James Brokenshire.

Each person present personally delivered a letter calling on the Secretary of State to directly engage with the Irish language community and to meet representatives of the community to discuss legislative provisions for the Irish language as was promised over 10 years ago in the 2006 St Andrews Agreement, of which the British government are co-guarantors.

The other co-guarantor, the Irish government, have recently stated their support for a stand-alone Irish Language Act as promised.

Gráinne Ní Ghillín, spokesperson for the An Dream Dearg #AchtAnois campaign, explained, “The event was organised to highlight the importance of the community in this campaign and to reiterate the role of the British government.

“The call for an Irish Language Act is one that comes directly from our streets, from our families, our schools and our young people.

“We have taken this to the very heart of the political debate and we want to keep it there until our rights are realised in law. The British Government can no longer stand by. It is high time they fulfilled their own obligations as co-guarantors of the St Andrew’s Agreement, and as a Government that facilitates the same legislation in both Scotland and Wales. The community calls for change; A majority in the assembly supports that change. Time for action, Acht Anois!”

Ciarán Mac Giolla Bhéin, another spokesperson for the An Dream Dearg #AchtAnois campaign, added: “The Irish Language Community have been waiting too long for the state to bring in legislation that will protect our human rights; and now is the time for action.

“We are calling on the Secretary of State to officially meet us and discuss this matter with us. We are also calling on him to use his role during the cross-party talks that will reconvene in September to ensure that this issue is resolved and that outstanding commitments in relation to the Irish language are finally fulfilled.

“The question of an Irish Language Act, he will be aware, was recently recommended by the Council of Europe and the United Nations “as a matter of priority”, is supported by the NI Human Rights Commission and as was ultimately promised over ten years ago in the St Andrews Agreement. Now is the time.”