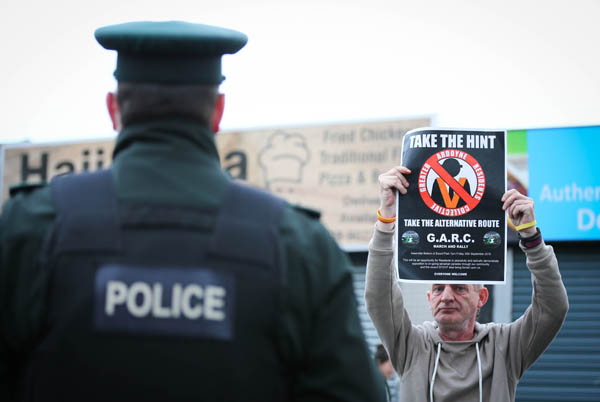 Father Gary Donegan has spoken out about the Greater Ardoyne Residents Collective (GARC) protest that saw him aggressively heckled by residents and supporters of the anti-parading group.

The priest, who will leave Ardoyne this week after 15 years at Holy Cross, was confronted by a group of residents and anti-parading protesters from other areas over his support of a deal that saw the Orange Order complete a return parade past nationalist homes on the Crumlin Road at Ardoyne for the first time since 2013.

The deal, thrashed out between the Crumlin Ardoyne Residents Association (CARA) and the Orange Order, was opposed by GARC who mounted a protest on Saturday morning.

Senior GARC member Dee Fennell – who lives in the Bone – told Fr Gary in a heated face-to-face confrontation that the decision was against the wishes of the people of Ardoyne.

Fennell missed out on a seat on Belfast City Council two years ago when he failed to garner enough votes in local elections.

Fr Gary told Daily Belfast he had been taken aback by the venom of the protesters but would still be prepared to meet with them.

“These are people who I have been involved with pastorally for many years and I would still be prepared to sit down with them, shake their hand and have a cup of coffee,” he said.

He added that he was shocked by some of the comments.

“During the Holy Cross blockade I was subjected to a abuse from the loyalist protesters but you couldn’t to a certain extent understand the anger because of the sectarian aspect.

“This was people that I knew and it really was very bitter and vitriolic. I have advocated their right to protest but they contradicted themselves because many nights I stood on my own on that road and didn’t see any of these people.

“If it were a Muslim cleric or a Jewish rabbi or another Christian minister would surrounding them and shouting them down in an intimidating way, would that be acceptable?”

“Events on the Crumlin Road herald in a new era of peace building and developing better relations between the communities of Ardoyne, Woodvale, Mountainview and the Dales,” he said.

“We witnessed the first outworkings of the agreement brokered between the Crumlin Ardoyne Residents Association and the three local Orange lodges, with CARA ending its protest against morning parades while loyalists immediately dismantled Camp Twaddell.

“These moves will significantly reduce community tensions in the area.

“With a moratorium agreed on evening parades, communities can move into further dialogue and discussions aimed at improving relations in the area without the issue of contentious parades hanging over every conversation.”