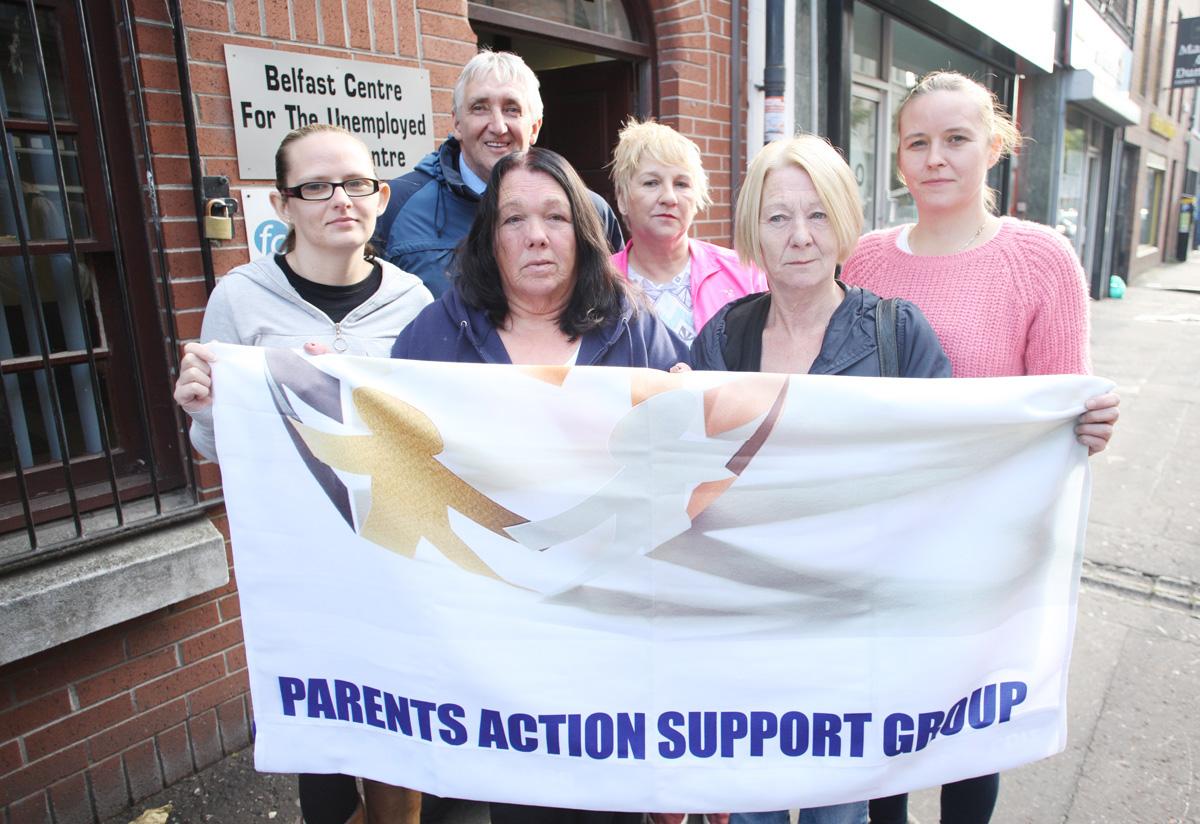 Annie Daly, front right, with other members of the Parent Action Support at the Belfast Unemployed Resource Centre in Donegall Street

A surge in young people sniffing glue in a Belfast community has led to calls for greater support for teens and their families.

In the past number of weeks, teenagers and young people sniffing glue in the Divis area has increased at a dramatic rate. Annie Davey, who is a member of the city centre-based Parent Action Support Group, which supports families of young people involved in drug and alcohol abuse, said they have noted a marked rise in solvent abuse in the lower Falls.

“Over the last number of weeks in Divis we have seen a marked increase in glue and glue sniffing,” she said. “We don’t know why because generally the main problem is the use of legal highs, kids taking blues and yellows. But definitely over the last few weeks in Divis in particular we’ve seen a lot of glue.”

The North Belfast woman is a founding member of the Parent Action Support Group, along with other parents whose children have been involved in misusing drugs and alcohol and who may be suffering from mental health problems and self-harming as a result of drug abuse.

The group is aiming to address what they say is a major gap between services available to youths and their families after they turn 18, while lobbying for much-needed rehab centres in Belfast.

Annie said she understands more than most the impact on families when a teenager gets involved in drug use. Her son Robert was just 13 when he became involved in drugs and anti-social behaviour.

That in turn led to activity and criminality and a spell in Woodlands Juvenile Justice Centre but that seemed only to escalate behavioural problems and her son’s reliance on drugs and legal highs.

In December 2011, Annie’s entire family was subjected to a death threat and they were forced to leave their family home in Ballysillan. Two years later, Robert was found near to death in a house on the Antrim Road and needed resuscitation from an emergency medical team.

Although doctors were able to save his life, he still battles with drug-related issues today.

Annie said the support groups helps parents like her who feel they have nowhere else to turn when their child is involved in drugs or alcohol abuse.

“You might find that siblings feel like the one with the problem gets all the attention. Parents don’t know where to get help. They can be sitting in late on a Friday night and their child can come in off their head on drugs and they just don’t know what to do. We offer help and support and it makes people feel like they are not alone.”

Often when a young person is involved in drugs, other people are quick to judge the parent or parents and this in turn leaves already stressed mothers and father feeling isolated and guilty.

“People are so eager to point the finger at you when you’re in that situation,” she said. “I have three children older than Robert. One is a doctor, an anaesthetist, one is a computer programmer with his own business in London and my daughter is a nurse. I didn’t raise my son any different to any of my other children.”

Parents Action Support Group is lobbying hard for better care for young people with substance and alcohol abuse. Annie pointed to hospitals like the Royal’s accident and emergency unit at the weekend as an indicator that the current system isn’t working.

“You’ll have parents sitting in the Royal because their child is on drugs and they’ve come home and self-harmed,” she said. “They don’t know what to do. The medical services do a fantastic job but this is so difficult. They are treating the immediate problem, which is the self-harming, but what do you then do about the rest?

“Many nights I have sat in casualty. There are elderly people there, sick people there, and your young person is out of it on drugs being loud and obnoxious and you know what it’s doing to everyone else. The parent feels embarrassed but what can you do? You need to get the help there.

“That’s why we are lobbying hard for proper rehab facilities. This is an issue that can’t be swept under the carpet, it isn’t going away.”

The group meets every Monday evening from 7pm to 9pm in Belfast Unemployed Resource Centre, Donegall Street, except for the second Monday of every month when they meet in Ascert, Bridge Street, Lisburn.