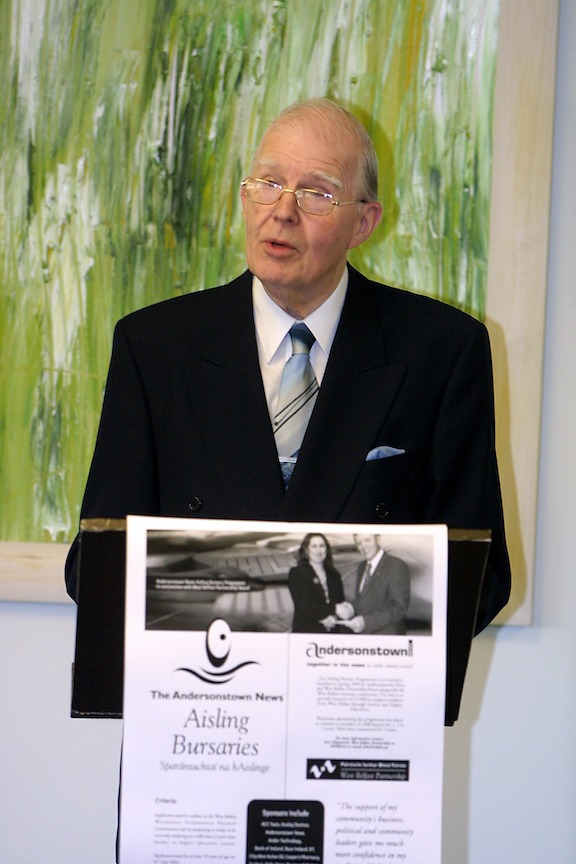 OPPORTUNITY: The late Sir George Quigley launching the Aisling Bursaries in the offices of the Belfast Media Group back in April 2002.
THURSDAY saw the highly anticipated launch of the West Belfast Partnership Board’s 2020 Aisling Bursaries.

Now in their 20th year, the Aisling Bursaries have become part of the community fabric of West Belfast and are awarded to the young and the not so young to enable them to begin, continue or return to vocational training and higher and further education.

Sponsors of the Aisling Bursaries include local businesses, social enterprises, community organisations and families who donate in memory of a loved one.

Since its inception in March 2000, a total of £665,000 has been raised from donors and 860 students from the West of the city have received either a full time or part-time award.

While lockdown restrictions are still in place due to the Covid-19 pandemic, Geraldine McAteer, CEO of West Belfast Partnership Board, explained how the Aisling Bursaries are moving online this year.

“West Belfast Partnership were really looking forward to making a big splash for our 20th anniversary of the Aisling Bursaries,” she said.


“We usually have a breakfast launch in May to promote the Bursaries to local businesses and secure donations – and in September we host a fantastic event in St Mary’s University College at which the recipients are presented with their Bursary Awards.  Obviously, we cannot now do that due to the Covid pandemic, but we nonetheless think that it is really important – this year of all years – to move forward with the Aisling Bursaries online as they can be a beacon of light in the current challenging times.

“We know that the community is coming to terms with a new way of living, working and studying and what we are facing is unprecedented but we believe the Aisling Bursaries can be a symbol of hope in very worrying and uncertain times. Young people in particular face many barriers at the moment. The jobs they would have expected to have while training or studying – in pubs, restaurants or retail – will be few and far between.  I have heard many people who have lost their jobs over the past few weeks talk about reskilling and retraining. So now more than ever, the financial support from a Bursary will make a big difference to local people overcoming some of those barriers.

“Likewise, we know it’s an extremely difficult time for local businesses and we are sensitive to the issues they face and do not wish to add to their burden. However, we have been contacted by both businesses, social enterprises and community organisations, to say that they are keen to be of assistance.

“Over the coming weeks, we will be uploading video clips from our sponsors and supporters who want to celebrate 20 years of the Aisling Bursaries. We are encouraging them to post on our Facebook and Twitter.

“We have opened up a Facebook page and are on Twitter, so we are encouraging all previous recipients of the Aisling Bursaries to post a video clip or picture on our social media – let us know what difference the Bursary made to you and what you are doing now.

“When we started the Aisling Bursaries 20 years ago, it was in partnership with the Andersonstown News, so we warmly welcome the Belfast Media Group backing our 20th anniversary – spreading the word about the Bursaries and helping us raise much needed donations. Every penny raised goes to the recipients.

“I want to commend all the businesses, organisations and families who have contributed to the Aisling Bursaries since they were inaugurated in 2000. Their generosity is matched by their commitment to this community and to making a real difference to the lives of the people who receive them.”

Commenting on the Aisling Bursaries 20-year milestone, former Sinn Féin President Gerry Adams said: “It’s really hard to believe that this is the 20th year of the Aisling bursaries and I want to commend those who had the great vision to put the project in place. Aisling means vision and these people were visionaries.”

He added: “I also appreciate it greatly that the organisers had the commitment to keep the Aislings going over 20 years – it speaks wonderfully well of the people of West Belfast.

“To those who made the donations, to those who year in, year out sponsored the Bursaries, I want to say thank you.

“But I also want to commend those who took the Bursaries, went on to greater things and returned to the community in West Belfast to enrich, to enliven, to inform, to lift, to strengthen and to empower the people of West Belfast, Here’s to the next 20 years.”

West Belfast MP Paul Maskey said: “The West Belfast Partnership are one of the most progressive community organisations across this city and they have proved that the last 20 years with the Ailsing Bursaries – we look at the number of people who have benefited from the Ailsing Bursaries, young people, not so young people, who have all gone on in life, have got a bursary and worked very hard to get their degrees etcetera and we see the benefit of that as they are now some of our leaders across our society.”

2020 applications are now open and can be downloaded from the West Belfast Partnership Board website.