OPINION – Gerry Adams: Another piece of our history is gone 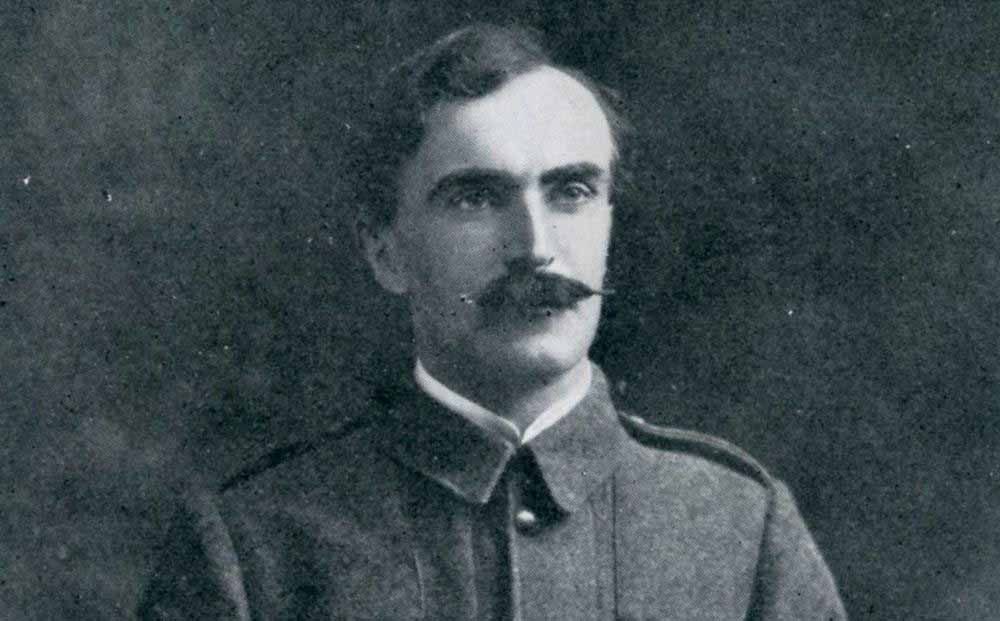 HERO: The O’Rahilly was only leader of the Rising to die in battle

Last week 40 Herbert Park, the home of the only leader of the 1916 Rising to be killed in action, was demolished in a shameful act of political and corporate vandalism and greed. The O’Rahilly – Michael Joseph O'Rahilly – was shot by British soldiers as he and others attacked a British machine gun position in an effort to cover the retreat from the burning GPO on Friday evening, April 28.

As he lay bleeding to death in a doorway, the O’Rahilly wrote a last note to his wife: “Written after I was shot. Darling Nancy I was shot leading a rush up Moore Street and took refuge in a doorway. While I was there I heard the men pointing out where I was and made a bolt for the laneway I am in now. I got more [than] one bullet I think. Tons and tons of love dearie to you and the boys and to Nell and Anna. It was a good fight anyhow. Please deliver this to Nannie O' Rahilly, 40 Herbert Park, Dublin. Goodbye Darling.”

The demolition of 40 Herbert Park again raises serious concerns at the refusal of successive Irish governments to protect Moore Street, part of the ‘Laneways of History’ linked to 1916 and where the leaders of the 1916 Rising held their last meeting.

Herbert Park was built in 1907 for the World’s Fair Irish International Exhibition to promote Irish industry. The O’Rahilly family moved in as its first occupants in 1909 and the O’Rahilly’s widow Nancy lived in their Herbert Park home until her death in 1961.

In August the O’Rahilly’s grandson, Proinsias Ó Rathaille, called for the house to be declared a national monument and protected. He said: “The house is of great historical significance. It is where the Asgard gunrunning was planned, meetings for the planning of the Rising were held there,  and my grandmother initially set up Cumann na mBan from the house, and it was the house to which my grandfather addressed the note to my grandmother as he lay bleeding to death.”

Derryroe Ltd, which demolished the house, is owned by the McSharry and Kennedy families who own the nearby Herbert Park Hotel. They want to build 105 apartments on the site.

Speaking on the demolition of the O'Rahilly house today.

"If this is not punished in the strongest possible terms, then it will give the green light for more of our historical heritage to be destroyed"

So I ask you Minister!

"For what died the sons of Róisín?
Was it greed! " pic.twitter.com/bp0RUvTBS6

On September 8, An Bord Pleanála gave permission for the development to go ahead despite opposition from Dublin City Councillors, the O’Rahilly family, the 1916 Relatives, Sinn Féin and others.

The approval was contingent on an eight-week period to allow for any legal challenges. Several days after the decision by An Bord Pleanála, Dublin City Council voted to add the building to the list of protected structures. Dublin City Council Chief Executive Owen Keegan confirmed to Sinn Féin that he had written to the developers McSharry-Kennedy to inform them of this.  However, with five weeks of that period still to run the developers moved in on Tuesday morning,  September 29, and demolished the building. Dublin City Council has said it will take legal action and that legal proceedings will be issued but this will not save Herbert Park. It’s gone. And with it another crucial piece of the history of the 1916 revolutionary period.

James Connolly Heron, the grandson of James Connolly, who is one of those fighting to save the Moore Street historic site, described the developer’s action as “a shocking act of cultural vandalism.” It is, he said, “a flagrant breach of the law and a direct challenge to each and every elected representative holding office on behalf of citizens.” He called for the house to be “rebuilt brick by brick, stone by stone, garden by garden”.

If you agree with James Connolly Heron and if you believe that the Irish government must protect Moore Street, why not write and tell them that. They are the custodians of our history and of the buildings and historic sites that tell Ireland’s story. Imagine the public outrage if historic sites in the fight for American independence were demolished? If Independence Hall in Philadelphia, where the Declaration of Independence and the United States Constitution were debated and adopted, was destroyed? Or Robben Island in South Africa? Or the home of Harriet Tubman, abolitionist, humanitarian and one of those who founded the underground railroad for escaping slaves from the Southern slave states in the USA, or the GPO in O’Connell Street?

Write to An Taoiseach Micheál Martin, Government Buildings, Merrion Street Upper , Dublin 2 or email him at webmaster@taoiseach.ie  or the Minister for Heritage Darragh O’Brien at the Customs House, Dublin D01 W6X0.

THIS column welcomes the publication of ‘I Am Sir,You are a Number: The Report of the Independent Panel of Inquiry into the Circumstances of the H-Block and Armagh Prison Protests 1976-1981.’

On October 27, 1980 the first hunger strike commenced. The years from 1976, when the British government ended special category status and sought to impose its criminalisation strategy, to August 1981, when the second hunger strike ended after the deaths of 10 republican POWs, were hard and challenging and difficult. Successive British governments, but in particular the Thatcher government, believed that by defeating the political prisoners they could defeat the republican struggle. To that end special powers, special courts, non-jury trials, corrupt judicial practice in the admissibility of forced confession, torture in interrogation centres, were all employed as tools by the British state. The use of violence and brutality by prison administrations and guards was an extension of all this.

For those of us who lived through those traumatic years much of what is in the report. It confirms what we already knew. However, the strength of the report is in its detail, in the confidential British government documents it accessed and in the eyewitness accounts of the prisoners and two prison governors. This report is an indictment of a British counter-insurgency strategy that deliberately and systematically abused physically and mentally hundreds of men and women.

I spent a short time in the H-Blocks on remand awaiting trial on an IRA membership charge. My conditions were radically different from those of the blanketmen but it did give me an opportunity to see for myself some of what they were going through and the urgent need for a mass public campaign in support of the prisoners.

I wrote: “I was struck by the spirit of the prisoners. In my other jail experiences, we had been cushioned by our numbers and by the prisoners’ own command structure from dealing directly with the screws; it had been possible for prisoners in the cages to serve long terms with little or no contact with the administration. Here in our individual cells, in the Blocks, it was different. If you wanted to resist a search, you had to face the screws on your own. But the screws couldn’t run the prison without the prisoners, and the prisoners were completely defiant. I listened in amused admiration as they shouted their defiance at particularly notorious prison officers. Most of those on my wing were younger than I was and were strongly assertive.

“At night-time on most wings throughout the Blocks there would be a sing-song, a quiz, a storytelling session, or occasionally we would just swap banter. I would lie back on my bed listening to the better singers competing for our applause. We had good singers: we had Elvis impersonators, Mick Jagger singalikes, Bobby Vees and Johnny Cashes; and, of course, we had rebel songs...

“I was treated as a special security prisoner, which meant that I was taken on my own when I had to go somewhere in the jail, normally for visits, and this was a bonus for me. Not only did Colette and I usually have an entire visiting block to ourselves – the one I had attempted to escape from – but it also meant that I got to see some of the blanket men when nobody else was seeing them.

“They were like characters from Solzhenitsyn’s Gulag, shuffling along in big boots without laces, wearing, for their visits, ill-fitting jackets and trousers. Most of the trousers had their backsides slit open, and all of the blanket men had long, unwashed hair and unkempt beards.”

The members of the Independent Panel, (the late Warren Allmand, Richard Harvey, Dr. John Burton and Prof. Phil Scraton) as well as Coiste na nIarchimí and Ó Muirigh Solicitors, are to be commended for their diligence in producing this report. It examines a pivotal moment in our recent history and provides an invaluable insight into Britain’s criminalisation strategy and determination to break the prisoners and by extension their objective of breaking the republican struggle.