Another weekend of mindless destruction in the Falls Park 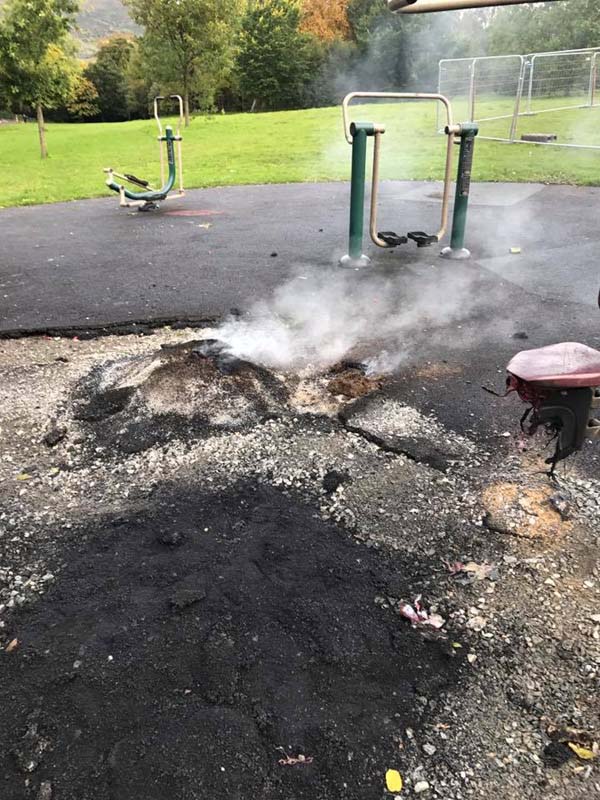 The morning after, scenes of damage and destruction again this weekend in the Falls Park

THE FALLS Park was once again targeted by mindless thugs over the weekend causing thousands of pounds worth of damage.

The outdoor gym area in the park was set alight on Friday night while the children’s play park was set ablaze last night (Sunday) causing extensive damage yet again to one of Belfast’s most beautiful parks.

Speaking after spending most of the weekend in the park, local Sinn Féin councilor Steven Corr said: “This is beyond comprehension, I am absolutely gutted and astounded that our young people would continue to do this.

“These are facilities that we have fought long and hard for, you look about Belfast and you see all the other beautiful parks and they are absolutely buzzing with families.

“There’s millions of pounds being invested in the Falls park and surrounding areas due to the Falls Park/City Cemetery Masterplan and these young ones have zero respect for the hard work that’s going into giving West Belfast top class facilities.”

He added: “Every weekend hundreds of young people from across Belfast congregate here attacking buses and taxis and generally causing trouble, they arrange to meet on social media and the irony of it is that they get here using the buses that they later attack then have the audacity to get the last bus home after wreaking havoc in the area.

“This madness needs to stop and it needs to stop now, we are sick, sore and tired of this happening every weekend, it’s almost as if it’s the norm now and that’s just not on.”

Cllr Corr also said that it’s time for parents to step up to the plate.

“This is a big setback, I was speaking to one of the park workers and was told that the kids’ play park is so badly damaged that it will need to be closed for a while.

“I am being stopped on a daily basis and contacted by people wanting to go into the park and challenge these young ones, it’s not up to our local people to do that it’s down to the parents.

“We need to get CCTV installed in the park so we can identify these young ones and get this stopped. I do not wish to demonise our young people, the vast majority of them are a credit to us, it’s just this small, mindless minority who are shaming west Belfast.”