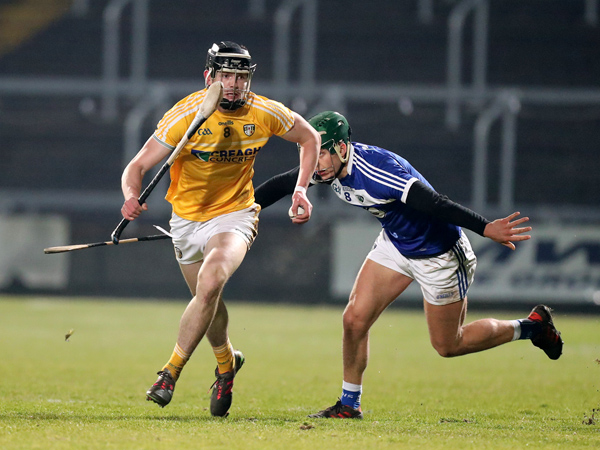 Antrim midfielder Joe Maskey slips away from his opposite number, James Ryan during last Saturday’s game in Portlaoise. The Saffrons suffered a five-point defeat to Laois and face a huge task this Sunday when they take on Division 1B pacesetters, Limerick in Cushendall

BARRING a strange set of results over the next two weekends, Antrim are highly likely to be involved in next month’s relegation play-off, but Dominic McKinley insists his side will battle for every point, starting with Sunday’s clash against Limerick in Cushendall (throw-in, 2pm).

The Saffrons arrived in O’Moore Park last Saturday night on the back of two impressive performances in defeat to both Galway and Dublin and expectations were high that Antrim could claim their first victory.

Laois, who were also seeking their maiden win, finished with an impressive tally of 27 points to claim a five-point win over Antrim.
With three defeats from three outings, Antrim’s fate looks all but sealed and McKinley admits he was disappointed with how “flat” his side were in Portlaoise.

“We started well enough, but Laois soon got on top and, for whatever reason, we just couldn’t get up to the pace of the game, said McKinley.
“We fumbled the ball a lot, something we haven’t done in the last two games. We seemed a yard or two behind the pace which is something we’ll have to look at.

“We would be very disappointed with how things went.
“We have to try and get something from the last two matches, we can’t be throwing in the towel.

“At the start of the year, we set out to stay in the division and to improve our hurling.
“We could never get going. Maybe the journey was a factor – we travelled for seven hours. I don’t know. We’ll have to look at everything.

“Overall, we were flat on the day and we can’t say any more than that.
“There is a lot of hurling yet to be done in this league. It isn’t the end of the world. We’ll have to reassess and come again.”

Saturday’s game under lights looked set to be a closely-fought affair as Ross King and Neil McManus exchanged long-range frees during a stop-start, but entertaining first half.
Yet, just before the break, Laois strung together a series of unanswered scores with goalkeeper, Enda Rowland converting two audacious frees from deep inside his own half to give the hosts a five-point lead at the break.

Half-time substitute, Eoghan Campbell made a wonderful run in behind the Laois rearguard to flick a McManus free into the net early in the half to give Antrim a lifeline, but Laois regained the upper hand to run out comfortable winners, despite a late goal from Nigel Elliott.

Referee, Johnny Murphy from Limerick seemed content to let the game flow in the opening quarter, but appeared to more whistle-happy towards the end of the first half and through to the second half.

Indeed, the Antrim management became increasingly frustrated at some of the frees awarded to the hosts.

“Some of the frees. . . you’d be wondering what they were for,” stated McKinley.
“That’s not making excuses, but I don’t know how many he (King) ended up with.

“We’ll go through that and look back on the game and we’ll see what the frees were given for.
“We are disappointed because we had built ourselves up for the game and we didn’t deliver.”

With Limerick sitting at the top of the Division 1B standings, few would give Antrim much chance of claiming something from their final home game of the campaign this Sunday.
The Treatymen accounted for Laois and Offaly in their opening two games and guaranteed themselves a quarter-final spot by scoring an impressive 1-26 to 0-17 over Dublin last Saturday night.

Much like Antrim, it also looks like Limerick’s fate is known and their final round clash with defending league and All-Ireland champions Galway looks set to be a straight shootout for promotion.

McKinley admits that Antrim probably would have expected to be in the relegation play-off at the beginning of the campaign, but hopes the Saffrons can quickly rediscover the form of the Galway and Dublin games for this weekend’s battle with Limerick.

“We could be (in the play-off) and maybe at the start of the year we’d have though that anyway,” added the Antrim boss.
“At the end of the day, we have to get on with it. We’ll prepare as best we can for next week and try and lift it for our home game.

“In the first two games we did hit those levels and we did play well. We had spells tonight (against Laois), just not enough, so we’ll have to look at it and see how we go.
“No matter what we have prepare as best we can for our next two matches and maybe a third one after that.”

While Antrim were disappointed by their performance against Laois, there were positives to take from the game with Eoghan Campbell and Stephen Rooney returning to the fold.
Campbell has recovered from a broken bone in his foot and came on at half-time for Conor McCann to plunder 1-1 from play while St Paul’s defender Rooney will benefit from his cameo appearance as he makes his way back from a shoulder injury.

Conor Carson was also used as a target man at the head of the Antrim attack when he came on and the Cushendall clubman could see some more action on his home turf this Sunday.
John Kiely’s men are unlikely to have their promotion challenge derailed by Antrim this weekend, but the hosts will at least be satisfied if they can push the Munster side like they did Galway and Dublin earlier in the campaign.