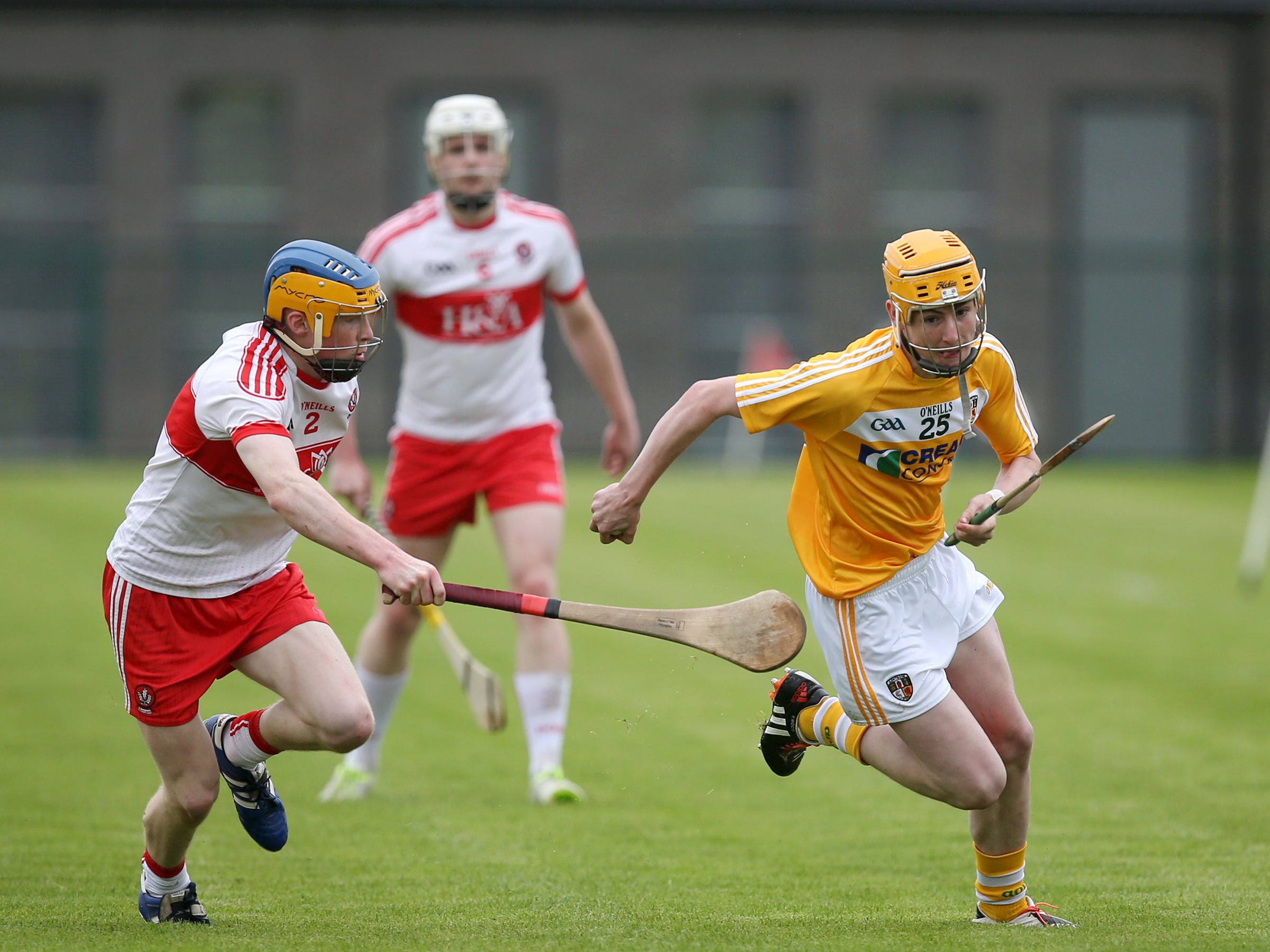 FOR the second time in less than 24 hours, an Antrim hurling team forced extra-time in a Championship fixture.
Fortunately, for the minors, they fared much better in extra-time than their senior counterparts and defeated Derry by a whopping 15 points in Owenbeg.

The runaway win in extra-time was only part of the narrative as the Oak Leafers built up a seemingly match-winning lead of nine points midway through the second half.
Strangely, Antrim only started playing to their full potential once Derry bagged their second goal and the introduction of super sub Eoin O’Neill helped turn the game in Antrim’s favour.
The Dunloy clubman was a late addition to the squad having struggled with an ankle injury in the build-up to the came but he came on to contribute 1-3, while Keelan Molloy and Conal Doherty-Cunning scored 2-17 between them.

Antrim manager Ciaran Kearney admitted his side were fortunate to draw the game in normal time.
“We were very fortunate to be where we are. I’d say that Derry are sick, it was probably a bit of a robbery there at the end but there was never any doubting our players potential and hurling ability but they were questioned at half time about their attitude and their ability to want to win the game because that was massively lacking. There was a massive lack of will but when it came down to it, they stood up.

“We were concerned that there may be wasn’t enough leaders in the team but when the going got tough, two three or four fella’s stood up and our hurling ability took over from there. We sort of dug ourselves out of a hole.

“I suppose the subs that we made had a big impact. We got to a stage that we knew who we were bringing on but figuring out who we were taking off and sorting out the team was taking more time than anything else”

Derry dominated the early exchanges but they also benefitted from a couple of soft frees, which corner-forward Brian Cassidy capitalised on.
The home side had 0-4 on the scoreboard before Antrim registered their first point with Colm McLarnon scoring while Doherty-Cunning added another from a free soon after.

However, Antrim were struggling to win the break around the middle.
A bit of good fortunate resulted in the opening goal for Derry as Cassidy’s free was mishit and Eoghan O’Kane’s flick turned the sliotar past Paddy Carlin. The introduction of Kevin McAllister gave Derry an even greater physical presence in the engine room and Antrim were increasingly reliant on Doherty-Cunning to keep them in touch.

At the other end, Conor Kinsella and Conor Carson were performing heroics to limit Derry’s chances from open play.
Antrim’s luck in the first half was summed up when they spurned two goal chances in quick succession.

First, Alex O’Boyle was denied by Morgan McEldowney from close-range before the Derry goalkeeper made another excellent save to keep out Doherty-Cunning’s snap shot on 24 minutes.
Antrim were then infuriated when Aidan Ferguson awarded Derry a free when Cassidy slipped when competing for a loose ball against Kinsella. The Oak Leaf corner-forward slotted over the resulting free to give his side a 1-8 to 0-5 lead at half-time.

Ruairi Rafferty passed up a glorious chance to extend Derry’s lead further on the restart but he blazed his shot across the face of goal.
However, Derry’s second major arrived when Odhran McKeever darted around the Antrim defence and unleashed an unstoppable goal-bound shot to put the Oak Leafers 2-10 to 0-7 ahead.
At that stage, it looked as though Antrim were exiting the Ulster Championship.

However, Molloy, O’Neill and Doherty-Cunning had other ideas as the trio took the game by the scuff of the neck.
O’Neill, who came on late in the first half, made several telling runs at the heart of the Derry defence and the Antrim attack had more edge with Doherty-Cunning now operating in the full-forward line.

Molloy was also starting to gain the upper hand in his battle royal with John Mullan and the Dunloy man scored a cracking goal to put Antrim back in the contest.
Moments later, he hooked Liam Cassidy before drilling over a fine point. O’Neill then bagged Antrim’s second goal to leave just a point between the sides.
A point from the hurl of O’Neill levelled the tie but their hard work was undone when O’Kane scored his second goal of the afternoon on 56 minutes.

Antrim refused to panic and two frees from Doherty-Cunning set-up a dramatic ending. In the fifth minute of injury-time, the ball broke kindly for Molloy and the midfielder fired over a stunning point to force extra-time.

Perhaps Antrim’s fitness came to the fore as Doherty-Cunning (0-3), Peter McCallin and Ruairi Crummey gave the Saffrons a five-point lead before the former landed Antrim’s third goal on the stroke of half-time.

The rout was completed in the second period of extra-time when McCallin added his name to the list of goal-scorers by scoring from the rebound after O’Neill’s shot was saved by the excellent McEldowney.

Before the full-time whistle blew, Doherty-Cunning brought his tally to an incredible 1-13 for the evening.

Derry manager John Mullan, in contrast to Ciaran Kearney, was scathing in his post-match assessment and blasted the performance of referee Aidan Ferguson.
“We’re very disappointed. I’ve been managing teams for a long time and I’ve never mentioned a referee after but the referee today made decisions that were baffling," said Mullan.

“We were blown consistently for over carrying which is fair enough but when we were tackling an Antrim man and tackling him fairly the ref saw otherwise and it cost us dearly.
“It was refereeing incompetence and that’s strictly what it was.

“All credit to Antrim, they were fitter than us and they were better prepared than us but we deserved the win and the referee took that out of our hands.

“There was a free down at the bottom corner at the very end that he blew against us. A fair tackle yet he gave a free out and moved the ball forward as well.
“ If they hadn’t of got that free it was game over. The time was up and we were ahead. That’s my feelings on it.”