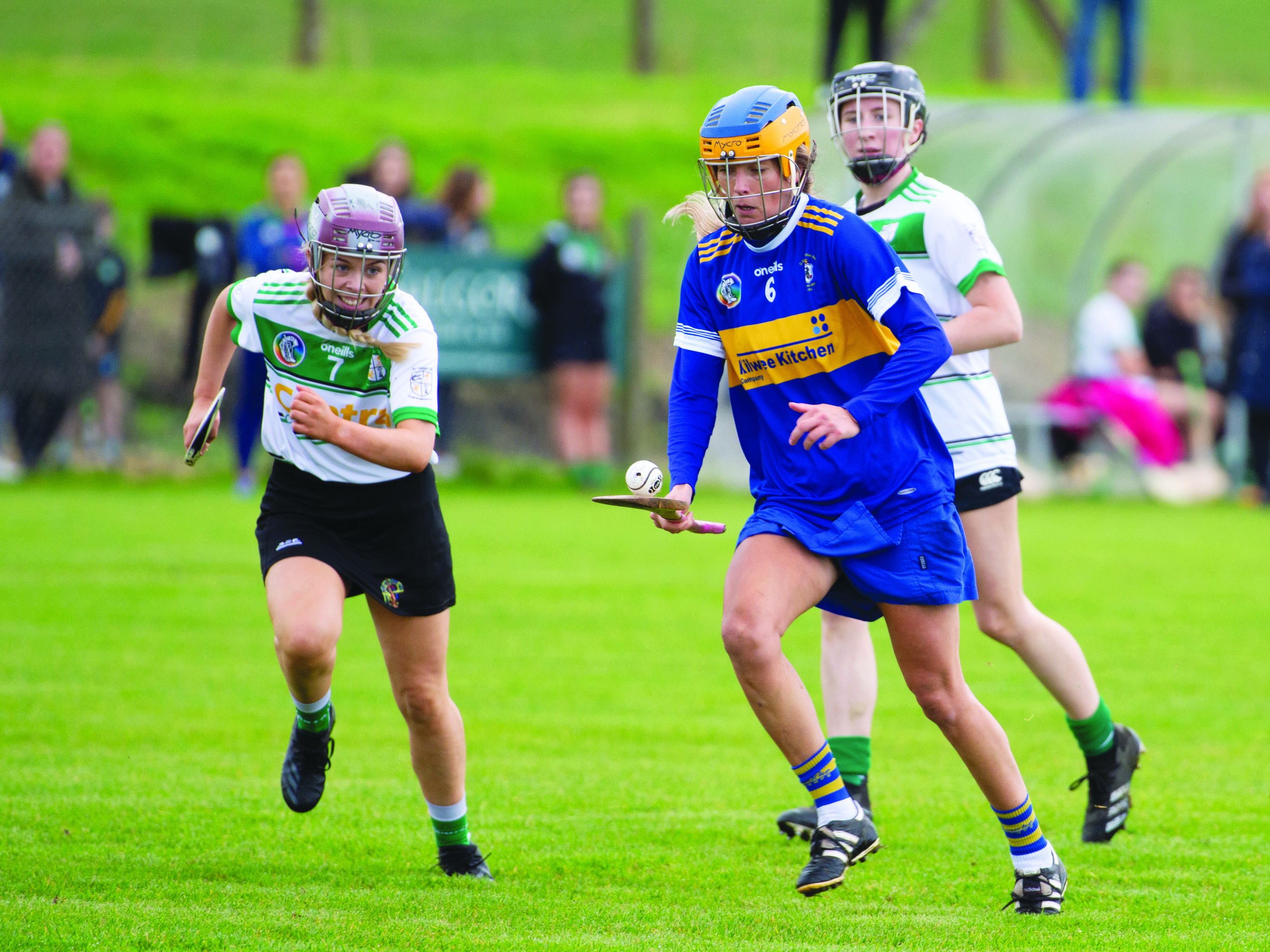 Manager Chris McDonnell had vowed that the club would do its utmost to bring the Championship decider to Belfast.

Having the game played in West Belfast might only be a small victory, but McDonnell believes more must be done to raise the profile of Camogie in Belfast.

“The Intermediate Championship is running behind the others because there was an issue with the Creggan and Ahoghill game earlier in the season,” said McDonnell.

“There was talk of the game being played midweek, but then it would have to be somewhere like Ballymena.

“This is second year involved and we haven’t played one Championship game in Belfast. We were determined to play on a weekend and we’re hoping the game could be played in Belfast.

“It was good to see St John’s in the Junior decider too – it gives Camogie a bit of a boost in Belfast.

“You’d be worried about a drop-off in the city as there were no Belfast players on the Antrim panel this year and just one in the minor.

“There is definitely an issue there and we have to close that gap and get those girls involved in the county panels.”

Our Senior camogs will play Loughgiel Shamrocks in the Intermediate County Final on Saturday the 13th of November. Time: 1pm Venue: Davitts GAC Belfast Let’s get out and support our girls 🇺🇦🇺🇦 pic.twitter.com/KqeSI9iQIj

The Shaws Road outfit lost out to Tír na nÓg in last year’s final after a replay and they’ll seek to go one better this time around.

They opened up their Championship campaign with an impressive 1-11 to 0-8 win over Portglenone, but they needed extra-time to see off the challenge of Cargin in a tense semi-final at Ballymena.

Rossa seemed poised to claim their place in the final and led by eight points inside the final five minutes.

However, a remarkable comeback from Cargin forced extra-time, but a second period of extra-time would be required to separate the teams with Orlagh McCall and Sarah Armstrong nailing the vital scored to give Rossa a 2-17 to 2-15 victory.

“I didn’t know what to expect from them (Cargin) as they’d gone through Division Three unbeaten,” reflected McDonnell.

“In the first 15 minutes, they had us rattled. It took us a while to weather the storm. With five minutes to go, we were eight up and conceded 2-2. Fair play, they showed a fair bit of character to turn it around in extra-time.

“I was delighted to hear the full-time whistle just so we could regroup.

“If Cargin have had another couple of minutes, we would have been in trouble. We managed to re-set and managed to get over the line. We showed a lot of fight and character. Sometimes you don’t know what you have in the locker until you are in those moments.”

Rossa will need plenty in their locker if they are to overcome Loughgiel in Saturday’s Intermediate final.

The Shamrocks illustrated their remarkable strength-in-depth by qualifying for the Senior, Intermediate and Junior finals in the same Championship season.

Although the Juniors lost out to St John’s last month by the narrowest of margins, PJ O’Mullan’s Senior panel secured their eighth successive title with a 3-12 to 1-9 win over rivals Dunloy.

McDonnell knows his side face a massive task this weekend, but is hoping some of the younger player can step up to the mark in the absence of a couple of key players.

“It is a huge task – Loughgiel reached three finals. That’s a serious achievement and fair play to PJ O’Mullan with the numbers they have.

“They won Division Two and they’ve steamrolled everyone at Intermediate. They tanked Ballycastle and beat Creggan quite comfortably. We played them in the league twice and they ran out comfortable winners.

“We’ve a massive uphill battle. It is a final and we’ve nothing to fear. We’ll go in as underdogs, but we have a fighting chance.”

He added: “We had to wait 10 weeks from our last league game before playing in the Championship and that was our biggest issue.

“We played Portglenone and then played back-to-back and also extra-time. We picked up a few injuries along the way but, thankfully, we’ve a bit of depth in the squad.

“We lost Eimear Byrne with a broken jaw in the quarter-final; Michaela Press did her cruciate.

“We’ve bled a lot of young players through this year and we’ve a lot of quality in the squad.

“It is good to be back in the final. Last year was a good experience and we’re hoping to build on that.”