Antrim keen to get off to an impressive start 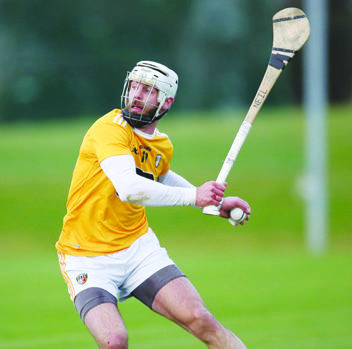 While promotion from Division 2A is a target for Antrim this year, Neil McManus insists their only focus has been on getting the campaign off to a winning start against Wicklow

IT’S a new League campaign, but the same ambition for Antrim’s hurlers who will make the trip to Arklow on Sunday hoping to get their Division 2A campaign off to a winning start and build the foundations for what they hope will be a promotion push.

The Saffrons were unable to return to the loftier heights of 1B hurling last year following their relegation in 2018.

An opening game defeat and inconsistent form thereafter ensured they failed to make it to the league final, so the obvious target this year will be to address those issues if they are to give themselves a chance of finishing the campaign with the trophy.

On the face of it, Sunday’s trip to Wicklow to face last year’s 2B winners ought to afford the chance for a confidence-boosting win, but nothing is being taken for granted with Neil McManus – entering his 14th season as a senior hurler – warning against complacency.

“The first game of every League is huge because for everyone the first game is what they’ve been looking forward to for a while,” said the Cushendall man.

“We have had Wicklow on out minds for months and I know they’ll be the same with us. We’ve not been thinking much beyond this and getting off to a good start to see where it can go.

“Promotion is very much our aim, so we need to go to Arklow and win, but there’s been no stone left unturned for this one.”

Antrim enter the new decade under new management with Darren Gleeson – part of last year’s backroom team – stepping into the hotseat with the Tipperary man bringing his own ideas and style of play.

The Portroe man was also part of Tipp’s All-Ireland winning set-up last year alongside his clubmate Liam Sheedy so has a fine insight as to how a successful team operates.

“He was with us last year so we’d all be familiar with him, but now he has taken the reins and he now has more of an opportunity to implement his own style of play,” said McManus.

“It’s good there’s also a bit of continuity with Gary O’Kane who has been in the backroom for about five years and Jim Close who was also there last year.

“Johnny Campbell in this year as a coach has been great because he did well with Loughgiel and won a county title with them I his first year as a manager. I think there’s a few here who played with him for Antrim before he hung up the boots, so we’re lucky to have him.”

One huge plus for the Saffrons has been the number of players who have committed to the cause for 2020.

For one reason or another, players have been unavailable over the past number of seasons, but this year looks a lot different with obvious competition for places across the board.

Players such as team captain Conor McCann, Eoin O’Neill, Ciaran Clarke and Conal Cunning are yet to fully return, but in their absence Domhnall Nugent, Conor Johnston, Michael Bradley and Niall McKenna have grabbed their chance and that battle to be a part of the starting 15 and match day 26 can only be a major plus.

Antrim will be huge favourites to take the points this weekend before their home opener against Mayo next week, but they will be made to work hard to come away from Arklow with the win.

The Kehoe Cup meeting between the teams in December may have ended up in a comfortable 5-27 to 2-10 win for Antrim, but Wicklow were missing a number of regulars.

Andy O’Brien will lead their attack with Eoin McCormack expected to return, while Jack Doyle can provide a platform from midfield if given the chance.

Antrim will be keen to get off to a fast start and assert themselves early in this game.

“We’ll be aiming to get out of the blocks quickly on Sunday,” McManus confirmed.

“We’re 100 per cent focused on Wicklow and while we want to get promotion, we’re in 2A for a reason so we won’t bet getting too far ahead of ourselves. We just have to perform when we go out on the pitch every game because we know it’s going to be a dogfight to get out of 2A.”