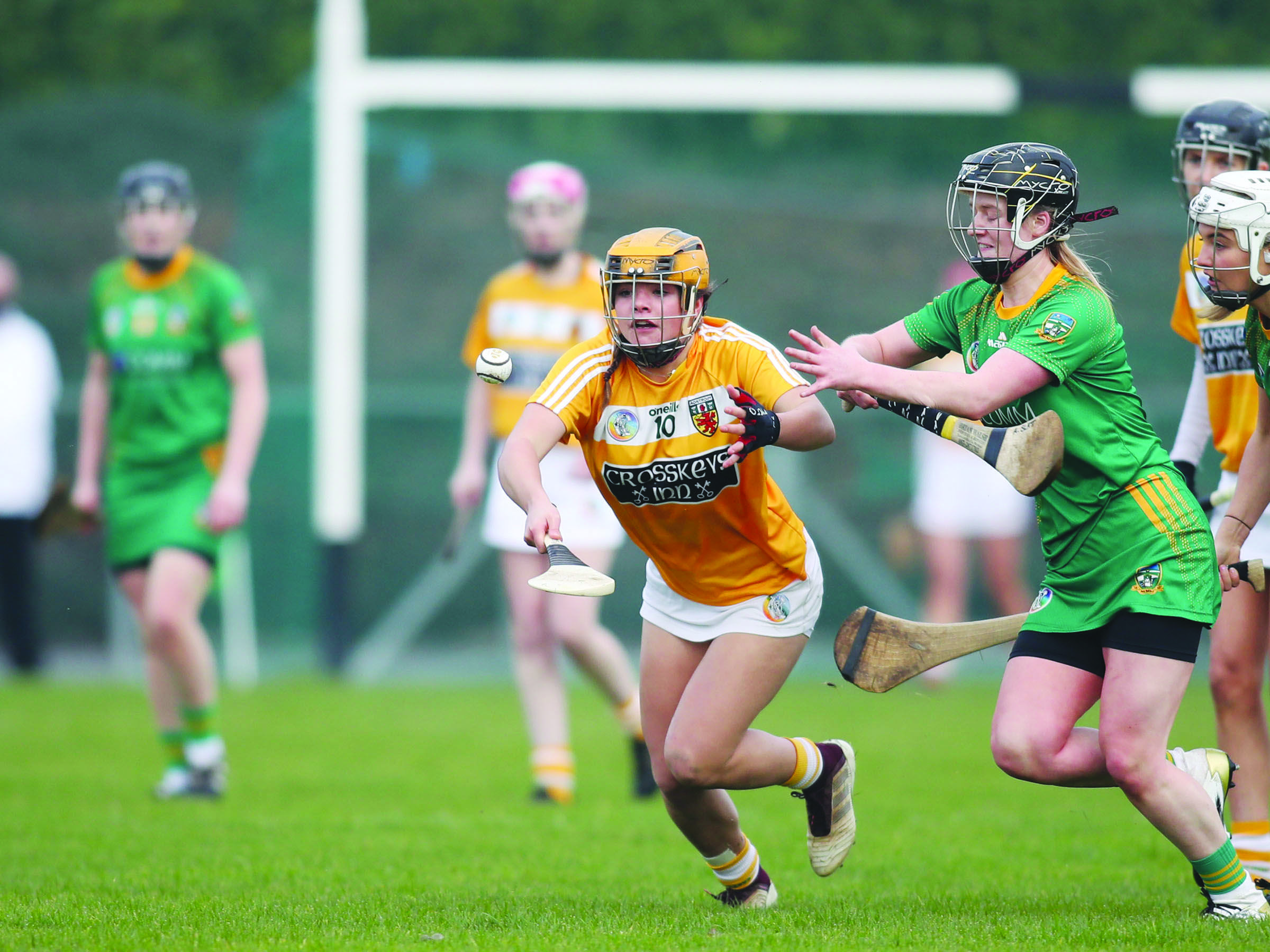 Antrim impressed in their win over Meath John McIlwaine

THE Antrim Camogs are also hoping to clinch a place in the All-Ireland final this weekend as they take on Laois in Inniskeen in the semi-final of the Intermediate Championship.

It will be Antrim’s third successive visit to the Monaghan venue having already defeated Carlow and Meath there in recent weeks.
Antrim saw off the challenge of Carlow 5-10 to 4-9 last month before claiming the scalp of Meath 1-16 to 2-9 in the second round to secure their place in the All-Ireland semi-final.

“It is a nice wee ‘home’ venue for us and it isn’t too far away,” said McKillen.

“We are over the border again and we are getting used to it at this stage. It is a nice pitch, a great ground and good people down there who are looking after us very well.

“The pitch is in good nick, the grass is a bit long, but they hosted a couple of games last week so it should be well down. We’ve been happy with the pitch in the last two games anyway.”

Ballycastle native McKillen, who is the joint-manager alongside Sarsfield’s clubman Jim McKernan, feels Antrim are coming to the boil nicely as they seek to reach the All-Ireland final.

A late 1-2 salvo from Carlow in their opening game gave a false impression on the scoreboard, but Antrim were always in command with Roisin McCormack (two), Orlagh O’Hara (two) and Meave Kelly bagging the goals in a 5-10 to 4-9 win in Inniskeen.

Yet, their win 1-16 to 2-9 over the Royal County earlier this month was, arguably, even more impressive and McKillen praised the commitment and dedication of the squad, which has endured a huge turnover of players since the beginning of 2020.

“I am delighted with how they’re going and they have been improving with every game,” stated McKillen.

“Against Carlow, we were slow to start. We got into our stride and we got a lead on them and they kept going. Carlow came on strong at the end and we held on for a four-point win.

“Meath were a different kettle of fish and it was a step-up. They came flying out of the blocks and our girls knew they were going to be in a tight game. They rose to the occasion again and they are just a super bunch of girls.

“It is a very young team and maybe it is maybe a year or two early for them. We are missing nine players since we started in February– five of those would be starters from the game against Tipperary in the league.

“That’s a serious turnover of players, but it shows the strength-in-depth within the country that we can get a team out who can complete at this level. They are a great group to work with.”

The former Antrim hurling ace turned his attention to their semi-final opponents last weekend as Laois and Kerry clashed in the quarter-final.

The Kingdom looked set to claim the semi-final berth, but were caught late on as Laois forced extra-time before running out 1-10 to 1-6 winners.

“It was a competitive match and the two teams were pretty even,” added McKillen.

“They cancelled each other out to some extent, but Kerry pulled away towards the end of the game and I thought they were going to win. They looked to have a bit more speed about them and were a bit more mobile.

“Laois got their scores at the right time and they were lucky enough to get the equaliser in normal time. After that, they pulled clear in extra-time, so maybe they were just that bit fitter.

“Oisin McConville had a piece in the paper last week about how Antrim were a credit because, despite not winning silverware, we field at all four codes and we don’t care where they go.

“It would be nice to prove him wrong on one point and go one and lift some silverware.”