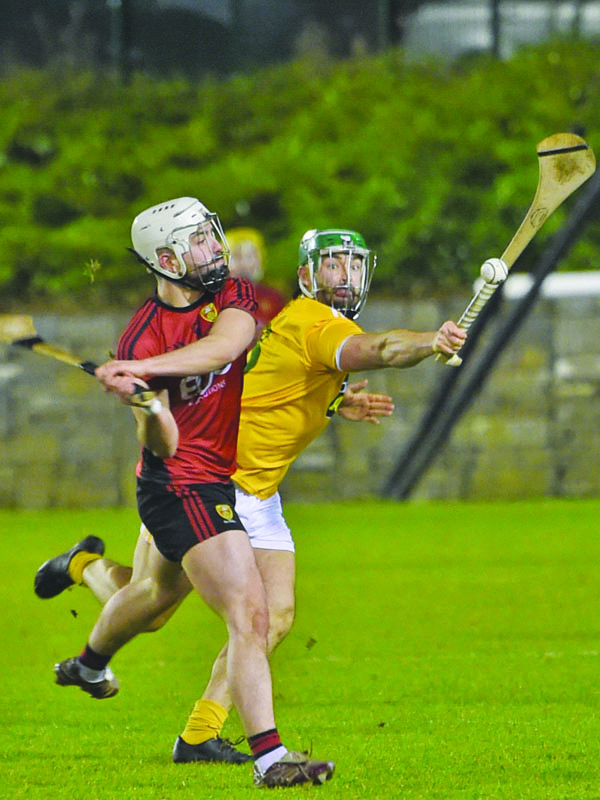 ANTRIM’S hurlers will seek to take another step towards the Division 2A final this Sunday lunchtime in the unfamiliar surroundings of Portglenone when they host a Meath team whose own promotion ambitions are hanging by a thread.

Storm Dennis forced the postponement of the Saffrons’ proposed trip to Offaly last Sunday, but Meath’s game at home to Kerry on Saturday did take place with the Kingdom making it three wins from three thanks to a 0-13 to 0-8 win over The Royals in horrendous conditions.

That leaves Nick Weir’s side with one win from three games and they will make the trip Portglenone knowing that anything but victory will leave the 2A final out of their grasp.

As expected, Antrim have secured maximum points against Wicklow and Mayo to date, but the challenges get much tougher from now on.

Last weekend’s postponement has thrown their schedule off a little, but team selector Jim Close insists they must simply refocus this week and get ready for what is likely to be a battle against Meath.

“It was unfortunate as we were really up for it and we had a good bit of momentum behind us with the earlier league wins and the match against Tipp,” he said.

“That was as good as any match you’ll get for preparation, but the weather’s been atrocious over the past few weeks. It’s completely out of our control, so there’s nothing you can do.

“We’ll just go again this week and prepare properly for Meath as that’s the next hurdle. All we can do is focus on the match that’s ahead of us.”

One positive to be taken from the extra week off is that it allows for some injuries to clear up.

Against Tipperary, Ciaran Johnston, David Kearney and Keelan Molloy all got game time having missed out in previous games, so they will be in the frame to start.

“You will get your bumps and knocks in every match, so this gives us an extra week to shake those off and get focused on the match ahead,” Close added.

Antrim did enjoy a handsome win over this weekend’s opposition in the Kehoe Cup, but Sunday’s game will be a much different proposition to the late November shadow boxing of pre-season.

A better gauge will have been the last meeting between the sides in the League when it took a last-gasp point from James McNaughton to snatch a victory for the Saffrons in Trim.

Jack Regan remains the focal point of the Meath attack and he is certainly one that will need to be kept quiet of Antrim want to avoid a difficult afternoon.

“Last year, we were lucky to get away with a win when we got that point in injury-time,” recalled Close, who was part of Neal Peden’s backroom team at the time.

“Then, we played them in the Kehoe Cup and although we did beat them well and put in a good performance, the conditions were good and it was played on a good pitch there.

“The weather has changed completely since then so it’s going to make it a lot harder for us.”

The Antrim squad is as strong as it’s been for quite some time, so the competition for places is a reason for the fine start they’ve made to the year.

Against Tipperary, McNaughton twice found the net and has given himself a chance of starting in a forward line that has a number of options.

The fact those options exist means that manager Darren Gleeson has the bench to change a game and that is a huge plus ahead of what has the potential to be a good year should things keep on the positive.

“It’s a very good squad we have,” Close agreed.

“Everyone has bought into it and all have a very high work-rate and want to push on. That gave us headaches as management and selectors, but it makes it all worthwhile as you feel it’s going in the right direction.”