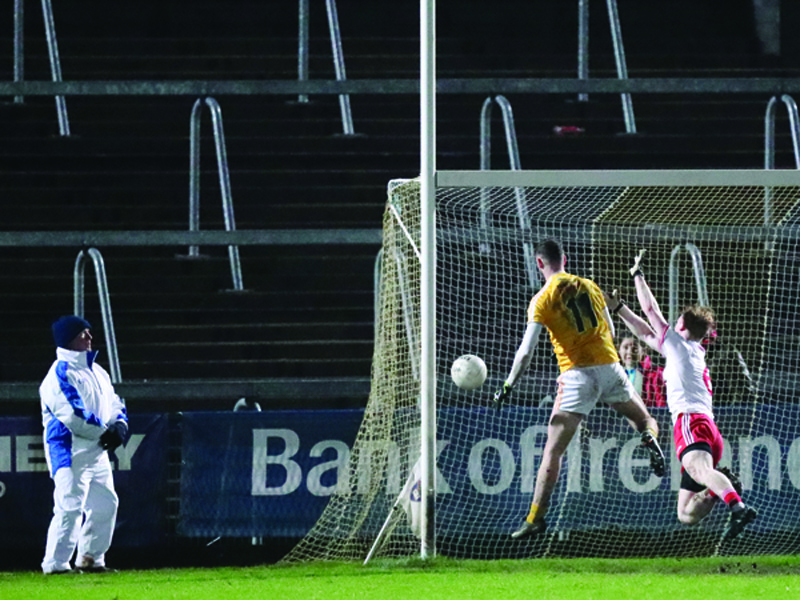 ANTRIM suffered a comprehensive defeat in their 2018 season opener at the hands of Dr McKenna Cup holders Tyrone on Wednesday night.

With Healy Park unplayable, the game was switched to the Athletic Grounds in Armagh, but conditions were still extremely difficult for both sides.
Despite the heavy playing surface, a high-scoring encounter developed with both teams creating plenty of goal chances.

Unfortunately for Antrim, the majority of the scoring came from the holders as goals from Padraig McNulty, Conor McAliskey, Frank Burns and Niall Sludden gave Mickey Harte’s set a winning start to the new campaign.

Colum Duffin and Matthew Fitzpatrick managed to tag on late goals for the Saffrons, but they served as mere consolation efforts.
Speaking after the game, new Antrim manager Lenny Harbinson, stressed that his sole focus was on building towards a promotion push from Division Four in the coming weeks.

“There were no surprises out there – the reality of the situation, without making excuses, is that Tyrone are a class outfit playing Division One football over a sustained period of time,” said Harbinson.

“We’re in Division Four trying to get out of it. There is a massive gulf there at the minute, but it is our aspiration over the next number of years to try and get out of Division Four and get up the leagues to get playing a better quality of opposition.

“Some things worked for us tonight, some things didn’t. We have only had this group of players for the last seven weeks and there is still a lot of work to be done.”

He added: “The guys who didn’t start tonight will get some game time on Sunday (against Cavan). We are trying to blood some people who are coming back from injury. Some of out players, unfortunately, are still out injured and can’t make the McKenna Cup.

“Our big focus is trying to get everybody back for the end of January.”

Harbinson will have been quietly pleased with a lot of Antrim’s play against the back-to-back Ulster Champions.
The Saffrons created plenty of chances early on, but some poor shooting let Tyrone off the hook.

In contrast, the Red Hands were more ruthless in front of the posts with captain Mattie Donnelly, Lee Brennan (45), and Conor McAliskey hitting early points.
CJ McGourty opened Antrim’s account on 12 minutes, but they were given a fright moments later when Lee Brennan’s shot was cleared off the line brilliantly by corner-back Pat Brannigan.

With Matthew Fitzpatrick and Stephen Beatty gaining a foothold around the middle third, Antrim grew in confidence and, with 23 minutes gone, just two points separated the sides as Ryan Murray split the points to reduce Tyrone’s lead to 0-5 to 0-3.

However, the holders hit an unanswered 1-5 to take control of proceedings before half-time.
Frank Burns fired over three superb points in quick succession to put Antrim on the backfoot while McNulty’s goal arrived just three minutes before the break.

McGourty knocked over a free to halt Tyrone’s momentum before half-time while Harbinson introduced the experienced duo of Paddy McBride and Conor Murray in a bid to turn the tide.
Antrim’s misfortune was summarised by the manner of Tyrone’s second goal early in the second half.

A darting run by Matthew Fitzpatrick created a goal chance for Ruairi McCann, who appeared to pushed in the back as he aimed a shot on goal. Tyrone goalkepper Niall Morgan got his fingertips to the ball to divert it on to the crossbar and, when possession was recycled to Duffin, he dragged his shot wide.

Tyrone, from the resulting kick-out, went straight down the pitch and the excellent Niall Sludden set-up McAliskey for a simple finish past Nugent in the Antrim goal.

Cathal McShane and Darren McCurry kept the scoreboard ticking over for Harte’s side while McGourty converted another free on 50 minutes for Antrim’s first score of the second half.
Remarkably, the Saffrons went on to outscore their opponents 2-6 to 2-5 in a frantic closing 20 minutes.

There was an element of good fortune about Antrim’s first goal as a McGourty free looked to be tailing wide of the post only for Fitzpatrick to rise at the back post to keep the ball in play. Duffin was on hand to palm the ball into the net as Antrim were rewarded for their endeavours.

Yet, Tyrone illustrated their scoring prowess once more as Nugent was wrong-footed by a looping effort from the impressive Burns on 58 minutes.
Two minutes later, McCurry unselfishly passed the ball inside to the unmarked Sludden to blasted into the roof of the net for Tyrone’s fourth goal of the night.

Antrim finished strongly, however, with Ryan Murray (two) and Duffin hitting excellent points.
Harbinson’s side notched their second goal when Paddy McBride played a lovely weighted passed across the face of goal to his St John’s clubmate Fitzpatrick, who palmed into the net at the back post.

Murray brought his tally to 0-5 for the evening late on while his brother Conor and Tyrone midfielder McShane both fired over the crossbar with goals at their mercy in injury-time.

For Tyrone, Stephen O’Neill’s influence is already beginning to show as they carved through Antrim’s defence on a number of occasions and took some stunning scores.
The 2005 Footballer of the Year was drafted into Mickey Harte’s backroom team before Christmas and the Red Hand boss was satisfied with his side’s 4-20 return.

“I think both teams handled the conditions quite well and it was great that we had this venue (the Athletic Grounds) available otherwise we would have had no game tonight,” said Harte.

“It was one of those games when a lot of what we hit went in, although we missed a lot of chances too.
“Stevie (O’Neill) was a quality player and he has a good feel for the game. From an attacking perspective, he knows what it is all about. It is good to have him on board and he adds value to what we are about.”

Harte added that Harry Loughran’s late withdrawal from the starting 15 was a precaution due to a minor hamstring injury and, with Moy set to play An Ghaeltacht in the All-Ireland Intermediate Club semi-final later this month, the Red Hand management opted not to risk the prodigious attacker.