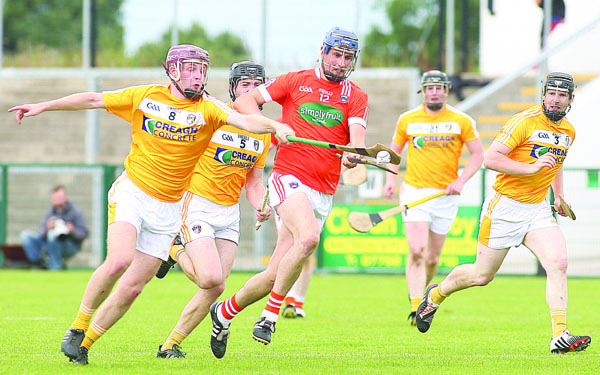 ANTRIM bid to win a second trophy in just over a fortnight when they take on Armagh in the Ulster final at Owenbeg on Sunday in what is a repeat of last year’s provincial decider. The Orchard men have now established themselves firmly as the main challengers to Antrim’s supremacy having seen off the stubborn threat of a Down side very much in transition in last weekend’s semi-final.

The Saffrons, meanwhile, disposed of Donegal in Celtic Park with some 20 points to spare and are strongly fancied to retain the Liam Harvey Cup once more. Not since Derry in 2001 has a team other than Antrim won the Ulster title and Armagh goalkeeper Simon Doherty knows his side are massive underdogs this weekend. “We know the quality that is in this group.

Everybody is pushing hard for places and we can see that in our training sessions every week,” said Doherty. “We are looking forward to another Ulster final. It is a terrific honour to represent Armagh in an Ulster final.

“We know it is going to be a massive test for us. Antrim are going for their 16th title in succession. “We are aware of the magnitude of the test. We need to make sure our attitude is right and that our performance is right.

“We know that we’ll not be too far away and, you never know, there could be a surprise. “It was one of the games we targeted at the start of the year. After last year we wanted to get back in the Ulster final. The Down game was always going to be a big test for us especially with the injuries that we had.

“We performed very well and we were happy with the outcome. We are really looking forward to this weekend.”

When the sides met in the league last month at the Athletic Grounds, Antrim were forced to pull out all the stops before running out seven-point winners. Impressive substitute appearances from James McNaughton and Deaglan Murphy eventually saw Antrim over the line. However, Doherty refutes the notion that Armagh have shown their hand and therefore lost the element of surprise ahead of Sunday’s Ulster decider.

“I think playing against Antrim last year in the Ulster final and again in the league this year, they know a lot about us and we know a lot about them,” added Doherty. “Certainly, we are well aware of their strengths and they will be aware of ours.

“We know we need to be on top of our game if we are to get the result we want.” That result against Antrim helped relegate the Orchard men as they were unable to get the point they needed in their final game away to Carlow. Doherty, though, says Armagh have learned some harsh lessons and they are well-tuned for their Championship campaign.

“We felt we were unlucky against Kildare. We were leading the game until a few minutes into injury time and, against London, we rescued a draw,” said the St John’s clubman. “In our home games, we were competitive. Against Antrim, there were only four points in the game leading into injury-time.

“Our performances in the away games let us down but we have taken the positives from the league and we learned a lot about ourselves. “Although we were relegated, we feel it was good preparation for the Ulster Championship and the Nicky Rackard.”

While Armagh will compete in Division 2B next season, Antrim will be two divisions higher after beating Carlow in the league final to clinch promotion to Division 1B. Doherty’s St John’s clubmate Simon McCrory lifted the trophy in Newry last month and the Armagh netminder knows Antrim are a team high on confidence at present.

“Antrim have great quality. They always produce top-class hurlers year after year,” said Doherty. “They proved that they were the best team in the league this year and I have to congratulate them on that.

“It is great to see Simon McCrory, a clubmate of mine, captaining the team. It is a great honour for him and he certainly deserves it. “Antrim are a quality team and they have had great success and club and colleges level. I have played with a lot of them at club level and also with Jordanstown.

“We are looking forward to testing ourselves against Antrim in the Ulster final this Sunday.”

Armagh will be without the services of Ryan Gaffney and Stephen Renaghan for Sunday’s decider while Eoin McGuinness is also doubtful. Against Donegal, Antrim gave their fringe players a chance to impress with Ryan Elliot, Ruairi Diamond, Joe Maskey, Daniel McKernan, Maol Connelly and James McNaughton all starting.

Given the fact that only seven points separated the sides in the league, the Saffrons management are unlikely to be as experimental for Sunday’s game in Owenbeg. Ciaran Clarke and Paul Shiels could be rested for the provincial decider but Antrim could recall Matthew Donnelly and Stephen Rooney into the defence while Antrim also have the option to field Neil McManus, who scored 1-4 against Carlow.

Ultimately, the strength-in-depth of the Antrim side ought to ensure they retain their Ulster crown. Murphy and McNaughton were sprung from the bench to hit 0-7 between them during the league meeting last month and the Saffrons will have similar quality on the bench this Sunday.