Appeal after staff held up in Suffolk Road armed robbery 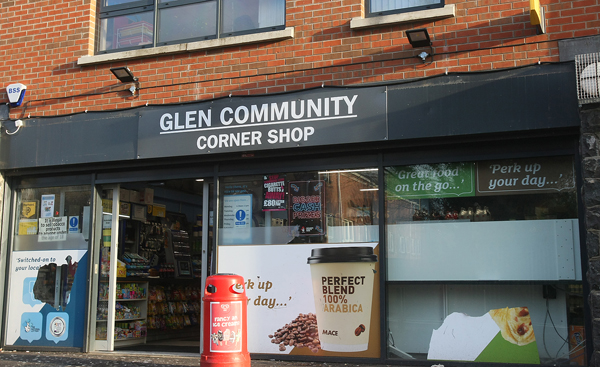 Pictured: The Mace convenience store on the Suffolk Road where two members of staff were robbed yesterday

THE owner of a West Belfast convenience store which was robbed on Sunday says he’s relieved his staff were unharmed during the frightening incident.

Paul McNeice was speaking to the Andersonstown News after a man brandishing a large knife held up two female members of staff yesterday afternoon and demanded money and cigarettes.

“Around 3.30pm on Sunday a man came into the shop with a really large knife, he walked up to the staff and demanded money,” said Paul. “The girls initially thought he was joking but then he came behind the counter and threatened them.

“One of the girls who was working is only 16, she was terrified. The staff gave him cigarettes and he demanded money, he got around £150.

“There was a crowd of kids in the shop at the time, they ran out as soon as they realised what was going on, I dread to think what could have happened.

Mr McNeice says that the safety of his staff and customers was his main concern and he’s glad that no one was hurt.

He said: “I wouldn’t have cared if he got hundreds, as long as the staff and customers are ok. I couldn’t have lived with myself if anything had have happened to them.

“I would like to thank the man who gave chase to the robber, he chased him into the forest and managed to retrieve most of the cigarettes.

“The local community have also been very supportive, as soon as word spread they all called in to make sure the girls who were working were okay. This will only strengthen my determination to deliver and provide a first class service to the community.”

Detective Sergeant McPhillips said: "The suspect – described as being approximately 6' tall, of medium build, aged in his 30s and wearing a red coat, dark-coloured bottoms and a monkey hat – then fled with a sum of money and cigarettes.

"This was a frightening ordeal for this staff member who was doing their job. Thankfully, they were not physically injured, however they have been left badly shaken by this despicable act.

"Police subsequently arrested a 31-year-old man on suspicion of robbery and possession of an offensive weapon with intent to commit an indictable act. He has since been released on bail pending further enquiries.”