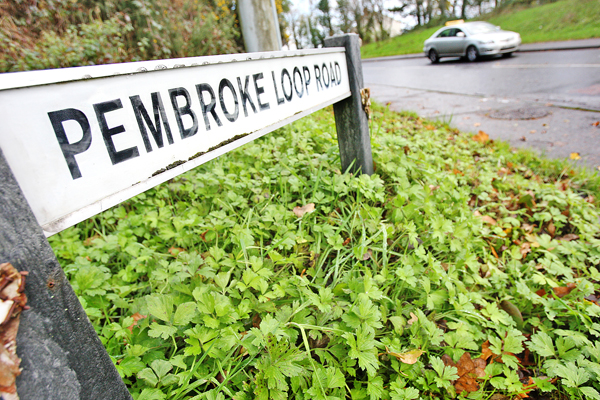 : The Pembroke Loop Road in Poleglass where the incident took place on Sunday morning

DETECTIVES are continuing to appeal for witnesses following a hijacking in West Belfast in the early hours of Sunday morning.

It was reported that a female driver was pulled from her car around 6.45am on the Pembroke Loop Road in Poleglass after a male ran in front of her car causing her to stop.

Another male opened the driver’s door and forced her from the car. The two males, along with a third accomplice, then got into the car and drove off along Pembroke Loop Road. The woman, aged in her 30s, was left very shaken by her ordeal.

Two of the males are described as being approximately 6’ tall. One was wearing a blue Adidas tracksuit top, black bottoms and a black cap. The other had his face covered with a stripy scarf and was wearing a hooded top. The third male was wearing a dark coloured coat.

The car, a black coloured Citroen C5 estate has not yet been recovered.

Detective Inspector Mark McHaffie is appealing for anyone who witnessed the incident or anyone who knows of the whereabouts of the black Citroen to contact Detectives in Reactive and Organised Crime Branch in Musgrave Police Station on 101 quoting reference number 372 of 20/11/16.

Sinn Féin MLA Jennifer McCann described the attack on the woman as “despicable”.

“It seems to be a growing method of aggravated car theft that we are seeing across the city,” she said. “While many newer car models do have automatic locking systems there are those which don’t. I would urge those who are travelling alone to put safety first and ensure their doors are locked while driving.

“I would also appeal to anyone who saw anything suspicious preceding this callous theft to report those details, no matter how small, to the PSNI.”