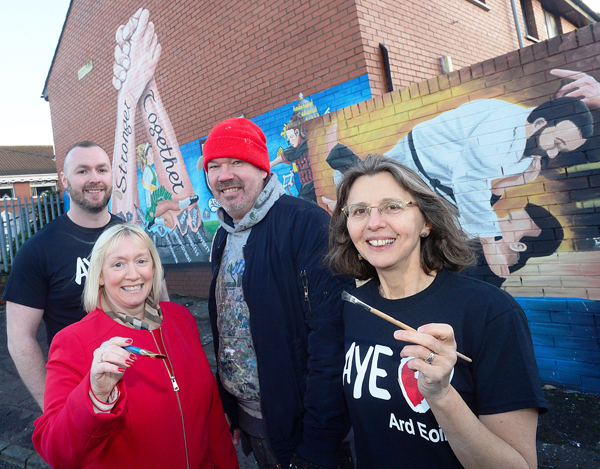 AN eye-catching new mural has been unveiled in Ardoyne to celebrate sporting and entertainment achievements, as well as young people from the area.
The mural was painted by North Belfast artist Michael Doherty and is located at Havana Court, which was a graffiti hotspot.
Boxers, hurlers, Irish dancers, martial artists, soccer players and even a DJ are included on the mural, which also features crests from local youth and sports clubs.
Almost £5,000 was provided by the Housing Executive to bring the mural to life, which included support for engagement activities with local youths.
The young people helped create the design and were involved in painting fences and building grow boxes around the mural, which is part of a wider youth work and community regeneration project by Ardoyne Youth Enterprise and YEHA (Youth, Education, Health, Advice), a local mentoring project.
Seán Breen, Youth Engagement Officer with Ardoyne Youth Enterprise, said: “Our thanks go to the Housing Executive for helping fund this mural project – the result is stunning and a great testament to our local sporting heroes.
“It comes as part of a broader clean-up of the Havana Court and Havana Way area and this wall was a magnet for graffiti.
“This new mural provides a vision of positivity for the area and some of those young people depicted in the mural helped to create it.”
Housing Executive Area Manager for North Belfast, Malachy McKinney, added: “We were delighted to provide support for this excellent project and we wish Ardoyne Youth Enterprise well with their efforts in regenerating the area.
“It is clear a lot of effort went into this new mural and those depicted can be very proud of their achievements,” he added.