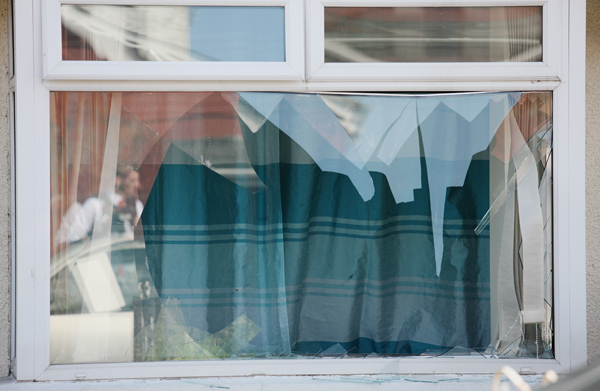 A number of arrests have been made following two aggravated burglaries in North Belfast at the weekend.
A man will appear in court today charged in connection with an aggravated burglary in the Ardoyne area of North Belfast – one of two unrelated attacks that saw homes smashed up and arrests made.
The first incident took place in the early hours of Saturday in Dhu Varren Crescent in the Woodvale district.
At approximately 2 am, police received a report that two men and a woman had gone to a house armed with a suspected firearm and a bat. One man aged 33 who was in the house received an injury to his arm. A glass panel in a door was also damaged. The arrests were made just before 2.55am in the Kircubbin area. A 26-year-old man and a 29-year-old woman were arrested on suspicion of attempted aggravated burglary, possession of a firearm with intent to cause fear of violence and possession of an offensive weapon in a public place. A car was also seized. Both suspects were later released on police bail pending further enquiries.

Meanwhile, a man will appear in court this morning (Monday, June 20) charged with aggravated burglary after an incident in Etna Drive in Ardoyne that saw damage caused to a vehicle and a house where the front window was smashed.
The 24-year-old has been charged with a number of offences including aggravated burglary with intent to commit grievous bodily harm and common assault.

Detective Inspector Joanne Harris has appealed for anyone with information on the Dhu Varren attack to contact them.
“I would ask anyone who knows anything about this incident to contact detectives at Musgrave Police Station on the non-emergency number 101, quoting reference number 141 of 18/06/16,” she said. “Or if someone would prefer to provide information without giving their details, they can contact the independent charity Crimestoppers and speak to them anonymously on 0800 555 111."