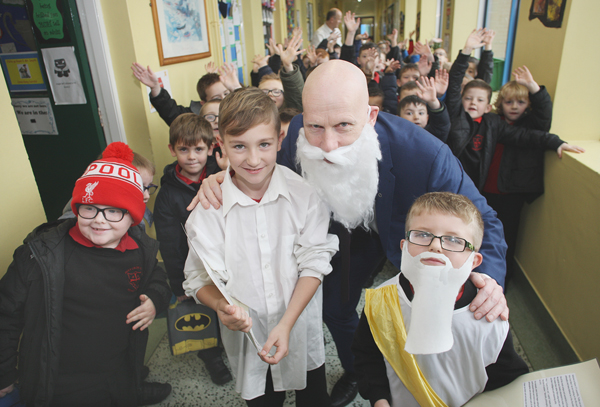 The pioneering school includes philosophy in the curriculum and as a result World Philosophy Day is an increasingly important feature in the school’s calendar.

This year Plato – the man credited with helping to lay the foundations of western philosophy and science – was the focus of study and principal Kevin McArevey said the kids all got involved.

“Every year we pick a philosopher to study for World Philosophy Day. Last year it was Socrates and this year is Plato, his student,” he said. Kevin says the idea behind including philosophy in the curriculum is to engender an environment of critical thinking.

“Philosophy deepens comprehension and if you look at the education reports they will show the last 50 years the ‘Three Rs’ have not improved. Reading writing and arithmetic are all skills and what underpins those skills is thinking and concepts – reasoning in other words.

“So I see reasoning as the ‘Fourth R’ – in fact, maybe I would have the temerity to say it’s the First R because you need comprehension to develop those other three skills so that’s why philosophy is on the curriculum.”

Last week, President Michael D Higgins said he believed teaching philosophy would help future generations learn to question information as the danger of fake news becomes more of an issue across the world.

“The dissemination, at all levels of society, of the tools, language and methods of philosophical enquiry can, I believe, provide a meaningful component in any concerted attempt at offering a long-term and holistic response to our current predicament,” he said.