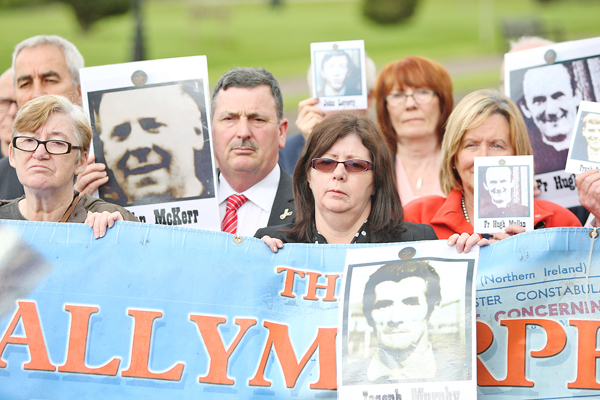 Ballymurphy Massacre Families say they were ‘disappointed’ with the Secretary of State’s attitude in a meeting that lasted 45 minutes.

ANGRY relatives of the Ballymurphy Massacre victims walked out of a meeting with the new Secretary of State yesterday.

They attended the meeting in the hope that James Brokenshire would release funds for inquests into the murders of their loved ones.

Family spokesperson John Teggart, whose father was among 10 people shot dead in August 1971, described the meeting as “terrible”.

“James Brokenshire refused to answer many of our questions and it was just going round and round in circles,” said John. “It was just the same old, same old. The families poured their hearts out about what had happened to their late relatives and were basically pleading for him to release the funding, but it was going nowhere.

“We explained that there is a wide range of families waiting for these inquests and the inquests don't need litigation. Lord Justice Weir said in January our inquest is ready and can be started within the year.

“It seems that politicians, namely the DUP, as representatives from the other six parties were at meeting supporting the families, are overruling the law by not allowing the funding to go through the Executive,” he added.

Briege Voyle, whose mother Joan Connolly was killed, said: "What do we have to do for these people to see sense? We need this funding released right away. Campaigners Mary Murphy and Joe Corr have died in the past few weeks and we need our inquests which were granted in 2011 to start now.”

Deputy First Minister Martin McGuinness said: “I do believe there is a huge responsibility on the British government to stop using the delays of others on the issue. They should fund those inquests as requested by the Lord Chief Justice. This is a big issue, these people have waited for 45 years and I think it is only right that the British government take up their responsibility."

“The Secretary of State has been meeting with victims and survivors. One of the outcomes should be that the London government changes for the better its approach to legacy issues. Today, the Ballymurphy families heard that, despite meeting victims and survivors, the London government and the Secretary of State have yet to demonstrate change in their thinking. They gave the families no hope that inquest funds – which the Lord Chief Justice has asked for time and time again – will be released now.

“It is also of concern that the Secretary of State is giving one party – in this case the DUP – a veto on a legacy issue. Victims and Survivors, their grief and their needs, should not be subject to a shallow veto. If the DUP can veto funding for inquests, they or others could try to do so again and attempt to veto other proposals to achieve truth, justice and accountability. Where would we be then?”

He added: “This cannot be allowed to happen. The Secretary of State must show that he hears the calls of Victims and Survivors, including the Ballymurphy Massacre families, and will answer those calls.”