Battered victim’s so grateful for support in wake of burglary 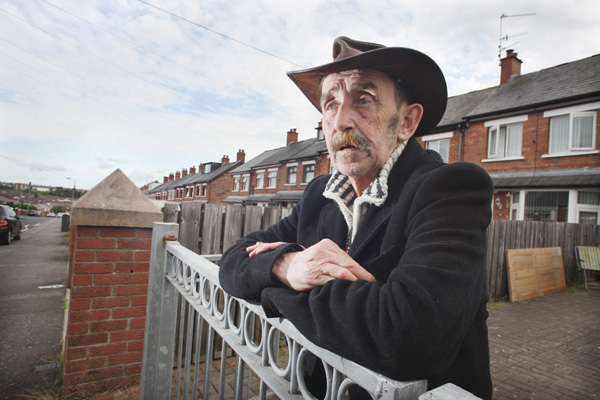 Tommy Crawford has been bowled over by the support

ARDOYNE pensioner Thomas Crawford says he can’t find the words to thank those who helped him after he was the victim of a savage beating during a robbery.

We broke the news in last week’s paper of how the 71-year-old was attacked and robbed in his Ladbrook Drive home. And ever since the local community has been rallying around the popular local character.

“I just don’t have the words,” the grateful OAP told the North Belfast News yesterday. “I think I would have crawled up and hidden away if it wasn’t for the generosity of the local people.

“The kindness has come from everywhere, with neighbours and the whole area helping me out and bringing me food.

“And for a number of local people to donate the money that was stolen means so much and was a very special thing to do. I’d love to thank those who sent it, I know now I have people behind me.”

Big-hearted members of Ardoyne Youth Club also paid a visit to Mr Crawford earlier this week to help get his house back in shape in an act of solidarity and kindness.

Local Sinn Fein Councillor, Gerry McCabe, expressed his thanks to the people of Ardoyne for the anonymous donation to the local pensioner.

“Since this incident took place I have been approached by a number of local people offering to donate money to the pensioner from the area who was recently a victim of a despicable and violent robbery in his home,” explained Cllr McCabe.

“Thomas is a gentleman and he is bearing up reasonably well since the robbery and the people of Ardoyne have been very supportive in a number of ways.

“This anonymous donation to replace the money stolen from Mr Crawford is typical of the generosity of the people of Ardoyne and I can’t thank them enough for this contribution which is a significant gesture. We have also had offers of help from young people in the area and even offers from the people working on the new memorial project to do any repairs he would require for the damage done to his home.

“Often this area makes the headlines for the wrong reasons and while this heartwarming intervention comes after such a dreadful incident, this shows the true face of the Ardoyne community.

“Tommy is a brave and independent man but there is no doubt that such an incident would affect even the strongest of us.

“We will continue to support Thomas in what ever way we can and keep in contact with his family in the time ahead.”