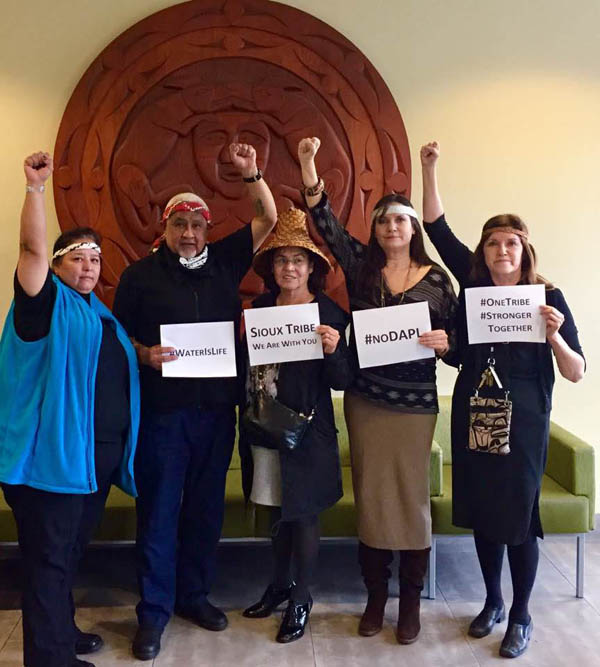 AN indigenous peoples campaigner whose relatives live in Belfast has spoken of her family’s work to prevent oil pipelines being built on native land in Dakota.

Cecilia Point’s mother, Rita Clenaghan, was from outside Glenavy and after travelling to Canada in the 1950s to teach on a First Nation (Native American) reservation met local man Alex Point and they went on to marry.

Cecilia and the wider Point family live in Vancouver and are now at the forefront of efforts to prevent oil pipelines being built in sensitive environmental areas sacred to native tribes. The most high profile of these campaigns has been the ongoing stand-off near the Standing Rock Reservation in North Dakota, which has become a focal point for the anger of Native Americans.

Confrontations have taken place between heavily armed law enforcement officers and campaigners from tribes across the Americas.

Cecilia, whose uncle and cousins still live near Belfast Castle, said being half Irish and half Musquean Indian have informed her radicalism.

“My niece Sasheen is down in Dakota and has been there for a couple of months and before that she was involved in the very strong activist community in Vancouver,” she said. “We have been fighting pipelines coming through our coast for a long time and that is what drove her to go down to Dakota.”

Recent moves by the US government to halt the pipeline and examine alternative routes for the $4 billion project have been welcomed, but Cecilia said there are wider issues involved.

“It could be rerouted but even if permission is overturned it won’t be a success for the climate because it will still be built, but it would be the good news if they are respecting the First Nation’s site,” she said.

Not everyone understands why there has been so much anger about the issue, Cecilia points out.

“What those who settled here don’t understand is that they look at North America as full of resources but when we look at a mountain we see stories and legends, which is very similar to Ireland. Often there are a lot of similarities between Irish history and First Nation history, so to us they are sacred sites – not for drilling, not for mining, not for skiing.”

But will the coming Trump presidency turn the tide back against the First Nation?

“I feel there has been enough noise raised by prominent people,” says Cecilia. “Thousands and thousands have descended on Standing Rock and Obama had to make a move. Even if Trump wants to put a pipeline through I still feel we will prevail.”