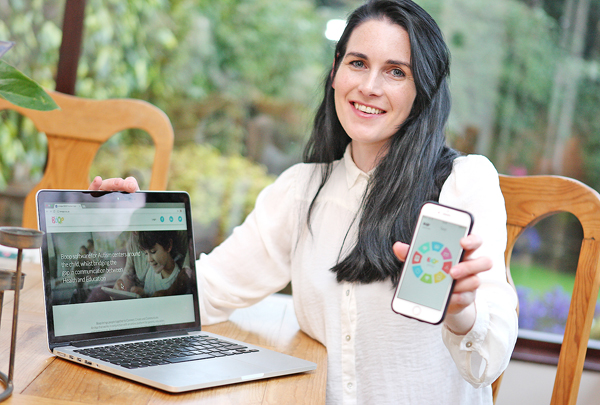 A West Belfast mother has developed a new website and app to help children with autism.

Debbie Craig from the Shaws Road decided to put her computer skills to use when she became increasingly frustrated with the lack of resources available to young autistic people.

Debbie, who studied computer science at Queen’s, is a mother of four and her eldest child Nicholas has high functioning autism. She describes her website – ‘Boop’ – as “software for autism that centres around the child, whilst bridging the gap in communication between Health and Education”.

Debbie said: “It’s more than just an app, it’s a platform or a system. The online platform is a place for everyone who has a vested interest in the care and development of a young person with autism to effectively communicate in real time. Here they can create schedules, routines, targets, track behaviours and much more. Everything they create through the online platform for the child will sync straight to whichever device that child is using.

“I got increasingly frustrated with the lack of communication between Nicholas’s school and his therapist. I decided to put my skills to good use and come up with something I would enjoy creating.”

Discussing her son’s condition Debbie said: “Nicholas was diagnosed around six years ago, I was six months into my first year in university. The diagnosis was a relief as I always knew there was always something different about Nicholas.

“We embraced it and over the years we have grown to understand autism. He has a different way of thinking about things, he is wired differently, but it’s great because he is teaching me different things every day as well.

“He needs a different strategy and different learning techniques, I wanted to come up with something that would ensure he had a good future ahead of him. Only twenty per cent of adults with autism are in employment, which I find shocking.

“If we could just get the proper tools in place then that figure could be changed, they have every right to contribute to society.”

Debbie says that being a female in a male-dominated environment was difficult but she refused to let that stop her.

“When developing Boop I wanted to ensure that the child was at the forefront of the design process. That's why Boop has an app dedicated solely to the young person.

“The app will display the interactive information they need to successfully go about their day with routines, stories, audio and video. Boop even has built in rewards to keep them motivated and on task.”

Debbie is close to the final stages of ‘Boop’. She has been helped with a proof of concept grant, however she is relying on fundraising through a kickstarter campaign to get the final £50,000 of her target.

If you would like to make a donation to help develop Boop or learn more about it simply search www.boop.ie