Between the Rock and a bard place 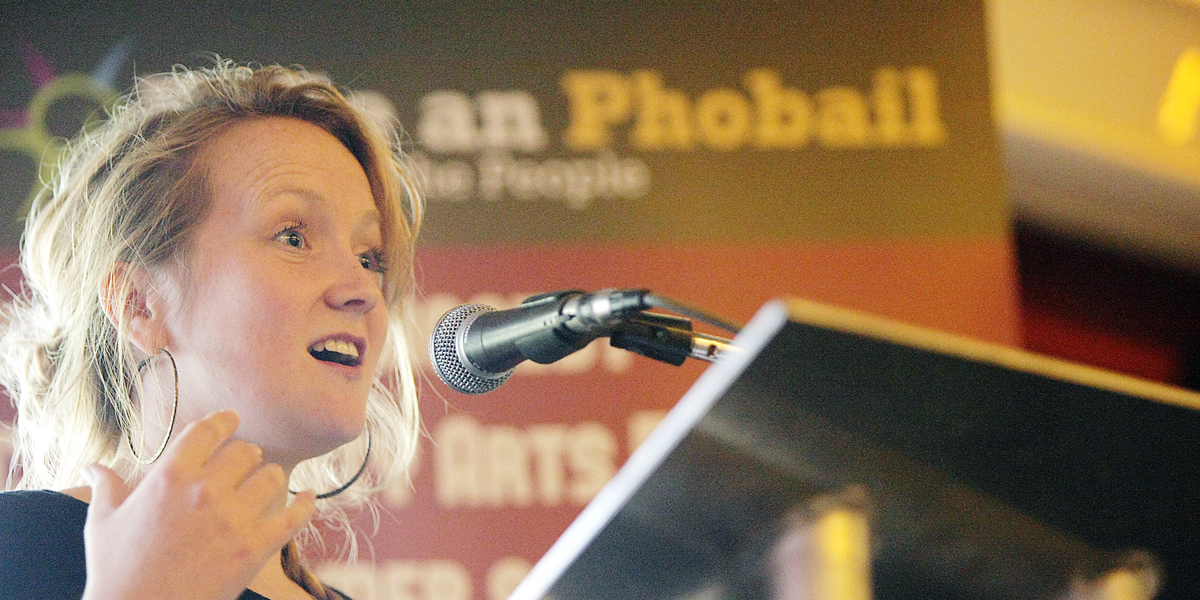 IT’S no easy feat to pack in the amount of talent that was on display last Thursday in the upstairs bar of the Rock, but somehow the Féile team manage it every year for the popular Scribes event.

Tickets are always scarce for the literary event which draws hundreds of bookworms to park on a pew for a few hours as the finest up and coming and established authors read and discuss their latest work.

And the audience was in for a real treat this year as Cambridge-based urban performance poet Hollie McNish was first up to the podium. Part of a collective called Point Blank Poets, Hollie belongs to a group “who feel a passion for the power of words, who add empathy to situations.”

Described as “a mother, leader and champion of breast feeding in public” Hollie told the audience that she looked to her three-year-old daughter for inspiration.

“I remember when she was one year old staring at her body in the full-length mirror and I came up with My Body Is Amazing. You have this little person looking at their body before society can tell them what to conform to or what plastic surgery can do.”

Hollie’s anti-racist poem Mathematics was written while she worked at a housing charity. She recalled an unnamed person used to come in saying that immigrants “are taking all the jobs and all the houses.”

“Maths is stuck in primary – one for one… sometimes immigrants bring more than minus,” she said.

Fizzing with energy, Hollie bemoaned the fact that campaigns and posters still advertise school uniform parties and how 30-year-old women should be eating cupcakes. “I look forward to living life as a woman” – and with that she bounded off stage to rapturous applause and a hefty demand for copies of her book, the critically acclaimed Papers.

Irish Times columnist Michael Harding was next up. “Do I have to read something?’ he quipped before reading excerpts from his new book Staring At Lakes, a memoir of “love, melancholy and magical thinking” which has been on the bestseller list for over three months.

Michael described living in Mullingar during 2006 “when the town had been buzzing and closing time was like downtown New York.” But then the financial crisis set in and people began to suffer from terrible bouts of anxiety. “When you went to the doctors, half the people in the waiting room were there because of the ‘stock exchange’.”

“I would phone radio stations as I couldn’t afford therapy,” he said.

Staring At Lakes is littered with memorable characters from a life that spans falling in love to the strains of Bob Dylan, trying to explain to an unknown phone operator that his iPod wasn’t working, and the minefields that are hotel rooms.

Playwright, screenwriter and director Peter Sheridan last held the Scribes audience in the palm of his hand eight years ago and audience was eager to hear what his latest book, Break A Leg, is all about.

Blending social history with memoir and set in Ireland during the 1960s and 70s, the book chronicles Peter’s life in theatre, his emerging problems with panic attacks and alcohol and all the characters that he encountered along the way to Sheriff Street.

“I remember thinking at one stage were we going to have to rob a bank to fund the productions,” he said. “Theatre had always been for me a way of confronting the big questions in life.

“Theatre curtains used to be on legs and they used to break depending on how many standing ovations that happened on any particular night, the phrase break a leg was always a good theatre term.”

Before proceedings came to an end Peter led the audience in a rendition of Irish traditional favourite Dicey Reilly, which had the Féile crowd counting down the next 365 days to Scribes 2014.