Beware of a single cow standing in a field 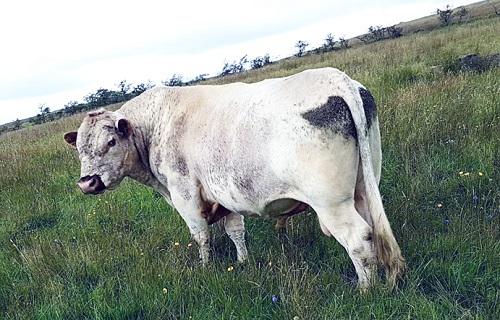 We’ve enjoyed some of the best weather of the whole summer this week, and plenty of people headed to Slievenacloy, the nature resort above Poleglass, to take full advantage of our beautiful hills. But they were stopped in their tracks by this sign – and this bull.

Some readers contacted Dúlra to complain – and maybe the workers here picked a bad time to let a bull roam free where so many people want to walk – but at least visitors were well warned by these signs.

You certainly don’t want to go walking in a field with a bull in it – and not many farmers take the bother of putting signs up! Dúlra did it once on the way home from Colin Glen with his two young kids in tow – and to this very day his heart is in his mouth when he thinks about it.

The bull – he thought it was just a cow – was in the bottom of the field. Dúlra has learned over the years that, unless you’ve got 20-20 vision and can see a cow’s anatomy from a distance, that a single cow in a field spells danger. The likelihood is that it is a bull. But that day he thought he could take a chance.

Cheesers
And as we walked across the top of the field after a day collecting cheesers (or conkers to you young folk) in Colin Glen, the bull spotted the intruders and began to run. Dúlra realised the danger immediately and scooped the two youngsters up – one under each arm like two bails of hay – and bolted for the barbed wire fence. He threw each girl over it like bowling balls and then dived over himself just as the bull was closing in.

We lay panting on the thick September grass while the powerful bull stood panting just feet away, thankfully on the other side of the barbed wire fence. Dúlra imagined he saw madness in its eyes – and its head was simply massive close-up. Getting hit by it would be like getting knocked down by a lorry. The kids thought it was just a bit of fun – they had no idea how much danger their Da had put them in.

So, all in all, Dúlra is relieved to see a sign like that on Slievenacloy this week – even if it does spoil a great day’s walking in the sun!

It’s almost time to clear out your nestbox – and this is the brilliant sight that greeted Dúlra’s pal Squinter when he opened the lid on the box on his gable wall this week. A family of blue tits successfully reared a family here this summer, and their nest looks like the cosiest house in Belfast.

Population
Dúlra’s not surprised the blue tits liked it – the box had been a gift from Aidan Crean, the bird man of West Belfast. Dúlra would estimate that Aidan alone has been responsible for doubling our blue tit population!

Reader, Poleglass: The buzzards which lived recently around Poleglass and near the Glenside Road seem to have disappeared. Does anyone know why? Dúlra writes: They do seem they have vanished, but we must hope that they have had a successful breeding season and are just stretching their wings, literally.