Book, film and play for Pearse 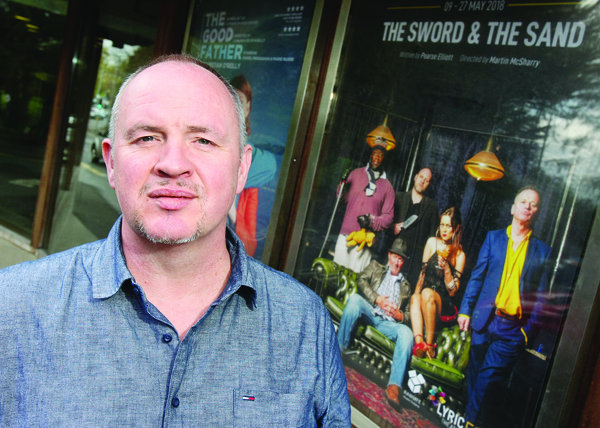 Pearse Elliott launching is new play, The Sword &amp; The Sand at the Lyric theatre.

WITH a new play about to make its debut, a book on the verge of being published and a film in the works, 2018 is already shaping up to be a big year for Lenadoon scribe Pearse Elliott.
His latest work for the stage, The Sword and The Sand, with curtain coming up later this month at the Lyric, tells the story of political refugee Azir who comes to Belfast to escape a life of persecution, only to find himself right back where he started. Pearse explained how the character of Azir gets taken advantage of by Duff, played by Marty Maguire, a local drug enforcer, and gets dragged into a life of crime from which he tries to escape. Pearse describes his latest work as the West Belfast “version of The Soprano’s”. He says that if “The Holy, Holy, Bus was the women’s play” then this is very much steeped in “darkness and retribution”.
“The story is all very live at the minute,” explained Pearse, “you have so-called drug dealers reinventing themselves as legit businessmen, making their way so to speak through ill-gotten gains. We hear and see about so-called paramilitary style shootings, people with outstanding debt to drug dealers with the message being pay up or face the consequences “ he said.
“The play is very thillerish, it’s very funny, I think there is a real element of Reservoir Dogs about it. It’s very relevant to what is going on today in terms of people becoming radicalised to leave their homes, their families, their way of life and travel to another country to fight so that element is very real in the play too.”
In between preparing to launch his first novel, a crime thriller set in Cuba entitled The Executive Game, and bringing The Holy, Holy Bus to the big screen, Pearse said he is delighted to be bringing his latest play to the Lyric stage as part of its 50th celebrations.
“I’m really happy to see Man In The Moon running at The Mac this month as well. It’s great that a play I have written has that longevity but I’m just mad for new work too. I think it’s important to keep bringing fresh ideas to the stage. I think it’s a real testament for real writers to keep creating something new as you’re only as good as the next one so to speak so it’s important to keep going.”
The Sword and The Sand runs at the Lyric Theatre until May 27. Not suitable for audiences under the age of 16.
For ticket information telephone the Lyric box office on 02890 381081.