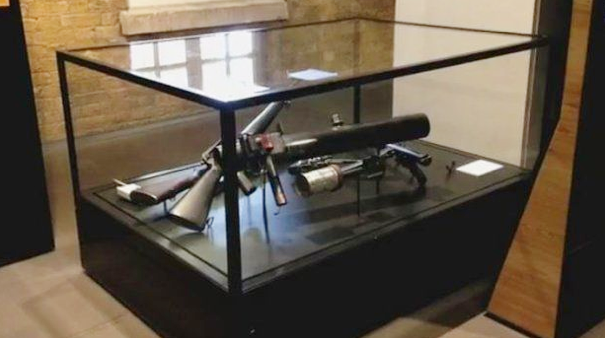 Relatives were told by police that the Czech VZ58 used in the 1992 massacre had been disposed of, but it turned up on display in this case at the Imperial War Museum

RELATIVES of the five victims of the 1992 UDA attack on an Ormeau Road bookies have welcomed yesterday’s apology by Chief Constable George Hamilton.

The families travelled to PSNI HQ at Knock to meet Mr Hamilton after the shock revelation in a recent BBC Panorama programme that the automatic rifle used in the massacre had gone on display in the Imperial War Museum in London.

Speaking after the meeting the families described the apology offered to them by Mr Hamilton as “heartfelt”. They said he told them that while the incident did not happen while he was in charge, he would work with them in their campaign to get to the truth behind the attack.

Billy McManus, whose father lost his life in the shooting, told reporters: “It was a heartfelt apology that he said in the meeting. He is a human being.”

Mr McManus added: “He did give us a full commitment that he will back the Police Ombudsman and he said that if you’ve broken the law in any part of collusion the law will come down hard on you.”

An investigation has been launched into how the weapon – which police told the families had been disposed of – came to be placed on display in London. It has now been removed from the display case in which it was contained and handed over to the Police Ombudsman.

In a statement issued later yesterday through Relatives for Justice and KRW Law, the families said: “To say we were shocked when we learned of the whereabouts of the murder weapon would be an understatement. To think this could happen in an ongoing murder inquiry beggars belief. Some of the survivors and bereaved families viewed it as some sort of trophy on show, given the role in the attack of the intelligence services and agencies – MI5 provided the weapon via an agent and the other gun used was a British army weapon supplied by Special Branch.

“The public display caused a great deal of stress and hurt to an already very difficult atrocity that remains to be properly investigated. We are also aware that the weapon is linked to other murders.

“We discussed with George Hamilton the practice of the provision of the weapon by police and sought assurances that every shred of evidence and detail concerning the atrocity would be provided to the ongoing inquiry by the Police Ombudsman.

“We welcome the apology by the Chief Constable and we remain focused on ensuring that the Police Ombudsman’s inquiry delivers truth and accountability for the murders of our loved ones and those who survived the attack.”