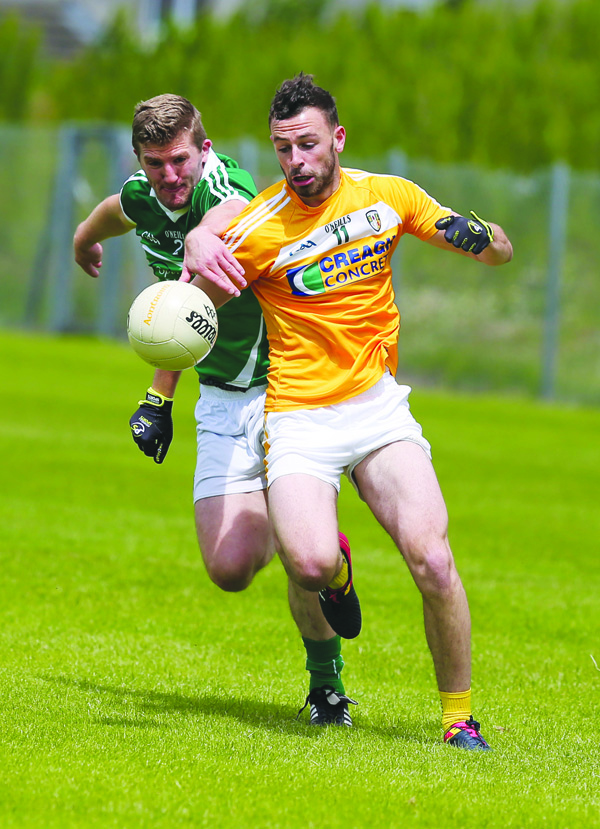 The ace attacker had been handed the ban on Monday night for allegedly ‘deliberately misleading an investigation’ into an incident at the end of Antrim’s two-point defeat to Armagh in the National Football League back in March.

Twice the St John’s man had one-game bans overturned, but on Monday night, the GAA’s Central Hearings Committee imposed the draconian penalty that caused shockwaves throughout Antrim and beyond.

However, it was confirmed by barrister and GAA pundit, Joe Brolly who helped with Fitzpatrick’s third appeal at the Central Appeals Committee on Wednesday, that the ban had been overturned and that the Sigerson Cup winner is free to line out on Sunday.

The verdict will come as a huge relief to the Antrim management team of Gearoid Adams and Frank Fitzsimons who already were facing into Sunday’s clash missing a host of regulars.

Conor Murray is suspended for the game having got a two-match ban from the Armagh game while Kevin Niblock, Ryan Murray, Kevin O’Boyle and team captain, James Laverty are injured.

The availability of Fitzpatrick will certainly be a boost although Adams, speaking at Monday’s press night at O’Donnell’s was far from happy with how his fellow clubman was treated throughout.

“The person I feel sorry for is Matthew,” said Adams.

“This is a kid who I don't think has even got a yellow card for St John's or Antrim never mind anything more sinister. If we are going to start sending in DVD evidence to the different CCC's, then I could send in that tackle on Ryan Murray from the Longford game and there were two or three other tackles when we played Armagh, but that's not what we're about.

“If someone was looking at that Armagh game and saw 'Geezer' (Armagh manager Kieran McGeeney) got a 12-week ban and there were three sent off, you would think it was a bloodbath, whereas at was about one minute of madness.”

It appears that common sense has won out and that the case is now finally closed as Antrim can now turn their attention to causing what would be a major shock this Sunday.

Rory Gallagher’s side enjoyed a fine National League campaign and were unfortunate not to make the Division One final whereas Antrim suffered last gasp heartbreak as a pointed free with the last kick of the ball in their final Division Three game at home to Longford forced a draw and subsequently relegated the Saffrons.

“It was devastating, but the Ulster Championship is special,” said Adams.

“We have said already, there were 12 or 13 boys who made their debuts during the National League, so they are going to taste Ulster Championship football for the first time which is the best provincial series about and it's something we look forward to every year.”

It will be a rather inexperienced looking Antrim side that starts this weekend although many grew into the inter-county arena throughout the League like Peter Healy, Conor Small, Conor Hamill and Stephen Beatty.

With Murray and Niblock missing, the door will be open for others to stake their claim with either Domhnall Nugent or Jack Dowling in with a shout to start at midfield although Tomás McCann was present at Monday’s open training session and could be in line for a return in the Antrim attack.

“We have said it before, we can't keep going back to the well,” insisted the Antrim joint-boss.

“There is good, young talent there that has to be seen. They have no baggage or have years of the hard times with Antrim, so they have nothing to lose.”

Donegal are also in a period of transition, but their crop of newcomers have tasted provincial success at minor in 2014 when they reached the All-Ireland final and at U21 earlier this year when winning Ulster.

Adams acknowledges the size of challenge ahead, but believes his young side can play with abandon and put it up to the hosts.

“We've been saying to the boys that Donegal in the Championship is a massive draw,” he added.

“Antrim v Donegal games, in quarter-finals anyway are usually quite tight. Donegal are one of the top teams, but that's what you aim for, so it's up to our boys to go out and ply their trade against one of the best players about, so we will see on Sunday just how far away we are.

“We have made it quite clear to the players that if we don't go out and apply ourselves, Donegal will embarrass us and they have the ability to embarrass most teams in Ireland.

“If we don't get stuck in, go toe-to-toe with them like we didn't do against Fermanagh last year, then we could be in trouble.

“Donegal have great League form, but they haven't tasted the Ulster Championship most of them. Going from U21 is a big gap to bridge.

“We are hoping for a shock on Sunday, but we know Donegal are big favourites.

“Look, we know we are up against a team who have lots of talent. It's up to us to express ourselves and try to match that as best we can.”