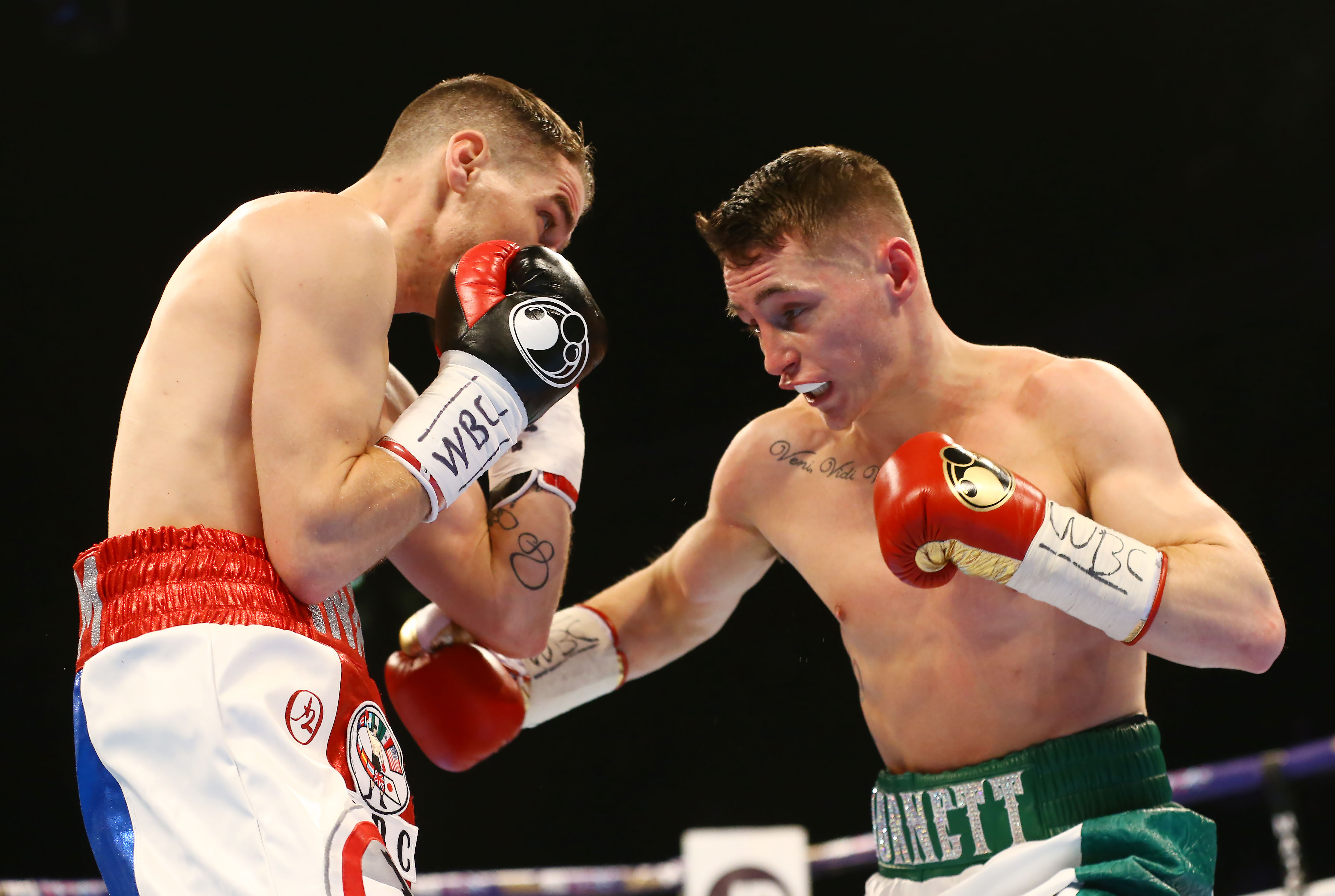 Adam Booth believes Ryan Burnett's impressive win over Anthony Settoul shows he is quickly maturing into a world-class boxer
ADAM Booth says he is delighted with the progress his charge, Ryan Burnett has been making and was thrilled with the Newington man’s performance to capture the WBC International bantamweight title with a points win over Anthony Settoul at Manchester Arena on Saturday night.

Burnett dominated the fight from first to last, sending the Frenchman to the canvas in the fifth round as he gave a glimpse of what is to come as he moves up the rankings.

Having landed the WBO European and British titles in his previous two contests at the same venue, the pressure was on to make it three from three in front of a huge Belfast crowd, but Burnett passed with flying colours, winning on a unanimous decision (100-90, 100-89, 100-89) against a strong opponent who shared a ring with super-bantamweight champion, Nonito Donaire just last year.

“I was absolutely delighted with the job he did,” said Booth.

“After 13 fights to be that professional against a genuine opponent…… He (Settoul) was a good enough opponent for Nonito Donaire at super-bantam and we had just six weeks notice, so to do a job like that against someone who was going to make him work after just 13 fights was great.

“That was such a professional performance. He timed everything right and under slightly different instructions (than before) and he showed that he has so many different elements to his game. I’m over the moon because we are at the stage of his career that tough fights like that are like gold dust.

“For him to deal with it with the respect it deserved – I can’t ask for more.”

Booth has worked with some of the biggest names in boxing including David Haye who he guided to world titles at cruiserweight and heavyweight, so has a big reputation for only working with the best.

Given he rates the North Belfast man so highly is a measure in itself as to where the 23 year-old can go and Booth sees his man knocking on the door for major titles before the year is out.

“By the end of this year I see him having a genuine top 10 ranking with all of the governing bodies and having progressive fights like that,” he predicts.

“After that we will see where happens from there.”

It is expected Burnett will top the bill in his home city next with April 30 the rumoured date although there is the possibility Matchroom may delay their return to Belfast for a couple of weeks until mid-May.

Either way, it will be a big showcase for the Newington man who got a taste for the big time on Saturday when given a rapturous welcome by the Belfast crowd in the arena and Booth says he now has a decision to make as to what type of opponent comes next for his man.

“There are a few opponents, but I’m just going to enjoy tonight and let him have a week off,” he said when chatting at ringside on Saturday.

“Then I will start to look at what elements we take from this one because this was a significant step up from Jason Booth.

“Whether we step up in opponent or go with a different style of opponent, that’s something I will have to think about.”

Burnett is really starting to blossom into a big name in the sport with his star set to rise further as this year progresses.

With his fellow North Belfast man, Carl Frampton drawing huge crowds and bringing the big nights to Belfast, Booth thinks his man is getting into a position to pick up the baton as he continues his development in and out of the ring.

“I think he is certainly in position to be asked that question because in his last two fights he got 12 rounds under his belt and 10 rounds against someone who was trying the whole time and who was a capable fella,” he said of his fighter’s growing maturity.

“In the last year he has matured mentally and emotionally outside the ring as-well-as inside, so now is the time to ask the question whether he can step up.”