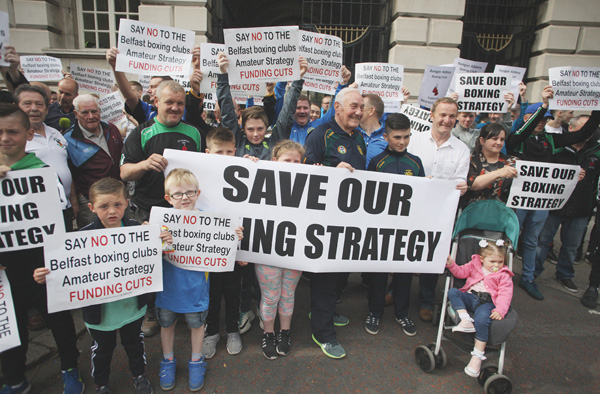 FUNDING for the Belfast Boxing Strategy was reinstated on Monday night by Belfast City Council after members reversed cuts to amateur boxing.

Funding in the region of £45,000 over the next four months was thrown into doubt at last month’s Strategic Policy and Resource Committee after members voted against continuing financial support.

Before Monday’s meeting, a protest was held outside City Hall as members of amateur boxing clubs across the city demanded the vital funding was restored.

The proposal to continue the funding was made by Sinn Fein Councillor Matt Garrett, who told members: “I was bewildered that despite being passed at a meeting of the People and Communities Committee, it was then refused at the Strategic Policy and Resources Committee.

“This is a ten-year Council strategy. It’s strange we are even talking about this.”

The PUP’s Councillor Billy Hutchinson said there were funding concerns around the strategy.

“This is not about the success of boxing in our city, this is about funding,” he said.

“We cannot support a boxing strategy unless it goes through the rates over the next lot of years.”

“It is not possible to fund a ten-year scheme through underspend,” he said. “We cannot give boxing clubs preferential treatment.”

“This Council does not give a pound to cricket or rugby, for example,” he said. “We don’t even have a rugby pitch or a cricket square in any of our parks.

“What will happen next month when another sport requests a strategy and we can’t give it funding and support?

“I’m not against boxing or a boxing strategy but we can’t keep on giving. You have to treat other sports in a fair and equitable fashion.”

After a vote, Sinn Fein’s proposal to continue the funding was passed with 33 votes in favour of the funding and 18 against.

The announcement in favour was greeted with applause from Sinn Féin benches, and from representatives of amateur boxing clubs who were seated in the public gallery.

Cllr Arder Carson (SF) welcomed the reversal, drawing cheers, laughter and applause from his colleagues and the public gallery when he said: “We won that one by a KO.”