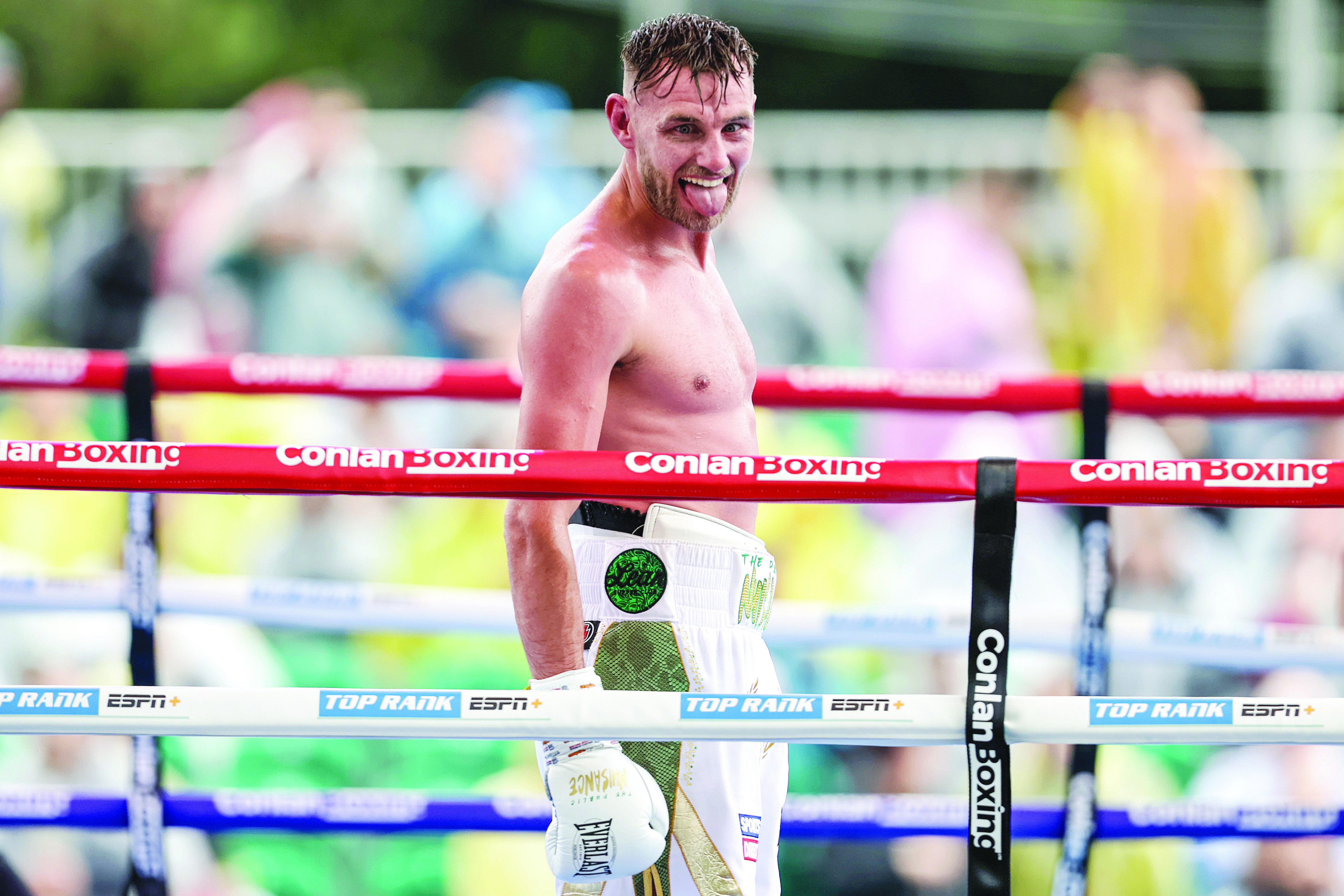 Sean McComb says he is ready to take any chance that comes his way with both hands, but first must take care of business against Ronnie ‘The Shark’ Clark at the Ulster Hall on Friday INPHO

SOMETIMES less is more and that has been how Sean McComb has prepared for Friday’s lightweight meeting with Ronnie ‘The Shark’ Clark at the Ulster Hall.

McComb had been accustomed to gruelling training camps ahead of fights that lasted for months on end, but a shorter preparation has left him feeling with a greater spring in his step against the veteran Scot who will not need a second invitation to upset the odds should the Turf Lodge man be below par this week.

Clark took the scalp of Zelfa Barrett back in 2018, but was out of the ring for over three years before returning this summer when falling to a points loss against Sultan Zaurbek in Kazakhstan.

The 36 year-old will arrive in Belfast - a city he has boxed in four times previously - with a record of 21-5-2 knowing that victory is imperative if he wants to have one last charge at a title, so McComb knows he can’t afford to be anything but his best in this battle of southpaws.

“I need to be fully switched on and listen to the instructions in the corner,” he agrees.

“It’s been a shorter camp than usual, but a very good one. This is something I may do more often because I feel better. I don’t feel overtired or overtrained, so it’s something I think I will look at again in the future.

“I’m delighted with where I’m at after the Féile and everything has gone to plan with Pete (Taylor) in training.

“We know Ronnie Clark is a handful and is a tricky opponent. He doesn’t get fazed by anything and just comes to give it a good go. We’re well aware of that and well switched on so I’m ready for the challenge ahead.”

That Féile win came at the expense of former world title challenger Vicente Martin Rodriguez when the Turf Lodge man got back to basics in his first fight under the tutelage of Pete Taylor having lost in his previous outing to Gavin Gwynne.

Bouncing back from a first defeat can tell a lot about a fighter and McComb proved his Commonwealth title defeat that had a chaotic build-up was a mere bump in the road as he boxed to orders at the Falls Park and that will be the plan for Friday night.

“Pete just said to get back to boxing and carry through the various aspects of my game that I had in the amateurs into the pro game so we can make things easy for ourselves -  I think I did that in the Féile and it was a comfortable win,” he said.

“Where I want to be going forward is with less cuts, less wars and I suppose less getting hit altogether because that’s where I need to be.”

Belfast fans will know all about Clark from this outings in the city and also from a Celtic title fight against Anthony Cacace back in 2015, so it is fair to say this is no gimme for McComb. Still, it is a fight he is more than capable of winning and winning well.

A top performance is required to do so, but should ‘The Public Nuisance’ produce a statement win, doors could well open for the 29-year-old who says he is ready to take every chance that would subsequently come his way.

“I just want to keep progressing and I just want one opportunity to come up and I’ll take it with both hands,” he insists.

“The likes of Ronnie Clark and these people are in the way of me getting that opportunity, so I need to be switched on fully otherwise there will be no opportunity.

“Look at the likes of Maxi Hughes: he got one opportunity, took it and it just went into a rolling effect with more opportunities and doors opening, so that’s what I’m working on.

“I’ll keep working hard behind the scenes and when the opportunity comes, I’ll be ready to take it.”