Bridget ups the ante with new lust for life 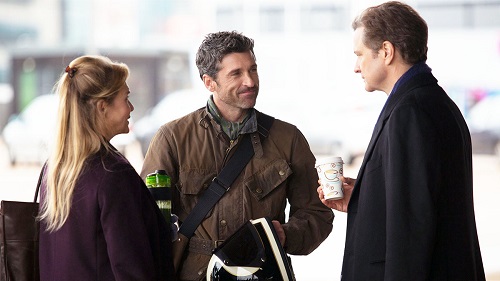 It’s been 12 years since we last saw accident-prone Bridget Jones (Renée Zellweger). Having survived the confines of a Thailand prison cell, thanks to the help of the dashing Mark Darcy (Colin Firth), Bridget’s life has changed in more ways than one.
After returning to England to marry Darcy and settle down for a nice normal life, Bridget’s plans don’t exactly work out as perfectly as she envisioned. Bridget and Darcy have now sadly broken up, with our heroine reborn a fortysomething singleton living in the same crummy flat she started out in.

But it’s not all doom and gloom, Bridget is embracing the single life and she’s just as flirty as ever. And, after spending the night with Jack Qwant (Patrick Dempsey), a handsome, charismatic and filthy rich American, she’s not content with one conquest and immediately jumps into the sack with her old flame Darcy. Unfortunately, Bridget soon finds out that she’s pregnant, and there’s only one question on everybody’s lips... who’s the daddy?

After poor old flouncy, pouty, bumbling Bridget got released from the Thai version of Magilligan jail, and was reunited with stiff, rigid, humourless Mark Darcy, I honestly thought we’d seen the last of Bridget Jones.

Sneaky
But, when Helen Fielding’s Bridget Jones: Mad About the Boy was released in 2013, I had a sneaky suspicion that we’d be seeing her on the big screen again.

Bridget Jones’s Baby is not an adaptation of Mad About the Boy however, but a fluffy sequel to the appallingly bad second film, The Edge of Reason.

In fact, so bad was The Edge of Reason that Bridget Jones’s Baby doesn’t have to do much to surpass it in terms of quality.
Director of the original Bridget Jones’s Diary, Sharon Maguire, returns to inject new life into the proceedings and, ultimately, it’s good to see good old Bridget embracing life with a confidant swagger this time around.

Gone are the meanderings of a frumpy, nicotine-addicted half-wit, here we have a Bridget who is, well, still a bit of a dimwit, but also enjoying life as a reckless and adventurous cougar.

It’s a role that Renée Zellweger seems to thoroughly enjoy, she really ups the ante in terms of giving Bridget a new found lust for life and jumps into the proceedings with an infectious aplomb.

Patrick Dempsey also makes for an entertaining new addition to the story while the erstwhile Colin Firth just has to turn up on set and play the rigid English gent once again.

AN enjoyable yarn that’s perfect for a girlie night out at the flicks, Bridget Jones’s Baby delivers comedy, drama and entertainment with ease.