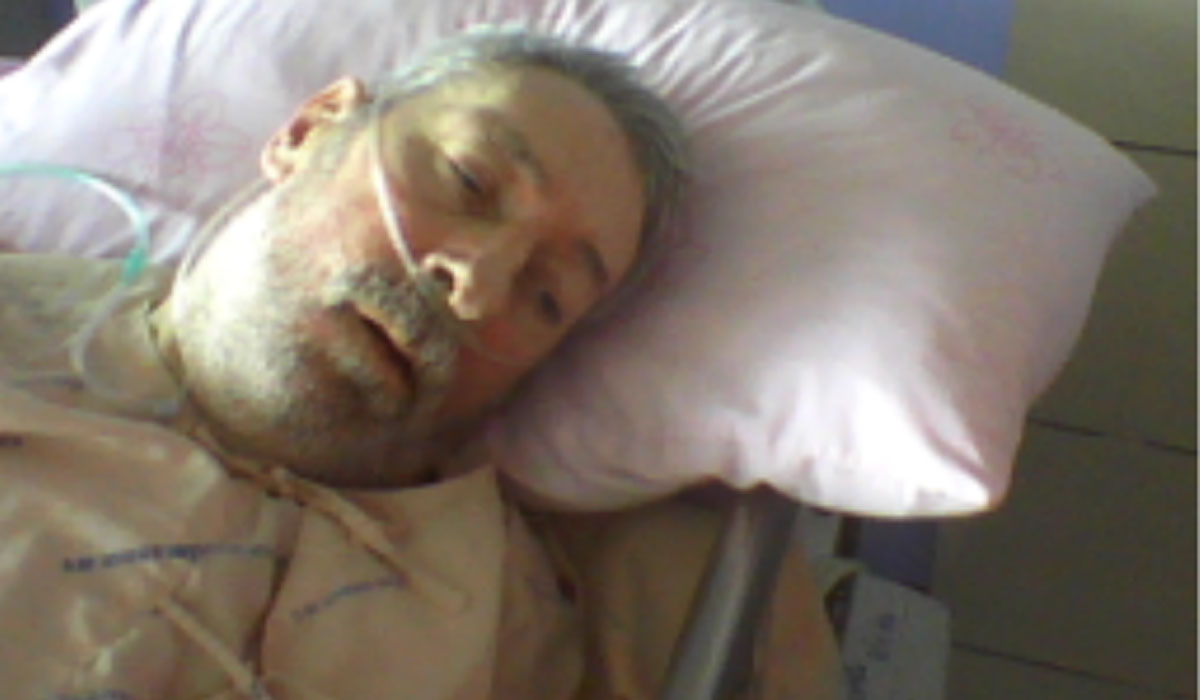 The family of a West Belfast man stranded in Thailand with a serious illness has spoken of their pain and anguish.

Francis McDonald travelled to the Asian country last month to visit his son Frankie. Within days of arriving he was admitted to intensive care at a Bangkok hospital having suffered a blood clot on his brain.

For three weeks the Springfield man remained in intensive care being tended to by Thai doctors who tried but failed to stop the bleeding.  Francis’ family had to scramble to gather the cash to pay for the treatment as the 56-year-old had not purchased any travel insurance for the trip. Having already paid £4,500, the family was asked by the hospital for another £8,500, which they do not have. As they cannot pay the bill, they are now unable to access the treatment required – a transfusion of blood platelets – that would enable Francis to fly home.

Francis was discharged from Kasemrad hospital last week and was physically carried out by Frankie and two friends. He now lies gravely ill in Frankie’s apartment.

Yesterday the Andersonstown News spoke to Francis’ son Kevin, who lives in West Belfast, about the worry and the distress his family has been experiencing.

“My daddy went to visit my brother in Thailand in mid-March,” he said. “On St Patrick’s Day I was on the computer chatting to my brother and he said daddy was lying down with a headache, he said he thought it was because of either jetlag or the humidity, but by Monday there was no change and my daddy ended up taking a fit and was rushed to hospital in Bangkok.”

Kevin says the family now believes that Francis, who suffers from a blood disorder, may have developed a clot on the long-haul flight to Thailand, which then travelled to his brain.

“He was admitted to intensive care because of his haemochromatosis condition, he was in and out of consciousness, had a headache and fever and was confused.  They did a CT scan and it showed blood around his brain so they were giving him medication and they operated on him too.

“Unfortunately my daddy didn’t get travel insurance so the bills were mounting ludicrously, they were charging for tablets, soap and even water.

Last week doctors told Francis’ son that they would not be treating Francis while the bills remained unpaid.  Left with an unimaginable dilemma, the son is now caring for his father in a Bangkok apartment, as Kevin explained.

“Last Tuesday they did another head scan and said the blood was still there and there was nothing more they can do to help. They asked when we are paying the £8,500 and said the bills will keep going up for as long as daddy’s in the hospital. Frankie told them we couldn’t pay and they said their work was done.

“Frankie had to take daddy out of the hospital, they asked for a wheelchair but were refused and Frankie and his two friends had to carry my daddy up into his apartment

“He is still in and out of consciousness. One time he recognised me after seeing me on Skype [an online voice and video contact service] and said ‘Son, come and get me.’ Other times he doesn’t know who anyone is, including Frankie who is so stressed out, as you can imagine.  My daughter was shouting ‘Granda!’ at him on Skype and he didn’t recognise her. It’s very upsetting. At the minute he hasn’t spoken in a few days and is deteriorating fast.”

The family has been in contact with the Irish Consulate in Bangkok as Francis is the holder of an Irish passport. Their response has merely added to the family’s suffering, says Kevin.

“We tried getting in touch with the Irish Consulate in Thailand for help because we don’t know what else to do, but we were told it’s a personal matter.  We are going to have to find the money to pay this bill and get him home, he will need a boost of blood platelets too from the hospital to be able to travel by air. It’s such a mess but all we want is to get him home and to the Royal for a second opinion because there is still something in him when we see he can sometimes recognise us.

“I’m angry and upset,” he continued.  “It’s so distressing for our family. My brother is trying to look after him, force feed him, clean him and wash him in a small apartment in Bangkok. It’s just unreal that this is happening.”

The office of West Belfast MP Paul Maskey has been trying to contact the Irish Consulate in Bangkok since last week but have yet to receive a reply.

“My office has been dealing with this matter,” said Mr Maskey.  “We are gravely concerned about Mr McDonald’s health. Healthcare no matter where you are in the world is paramount, he is entitled to it. We will continue to work and hopefully get a positive resolution for the McDonald family as soon as we can.”

We contacted the Irish Department of Foreign Affairs who, at the time of going to press, were unable to provide a comment.

Meanwhile, the McDonald family are now planning to hold emergency fundraisers in both Davitt’s GAC and McDermott’s GAC.