Burnett and Haskins weigh-in ahead of title showdown 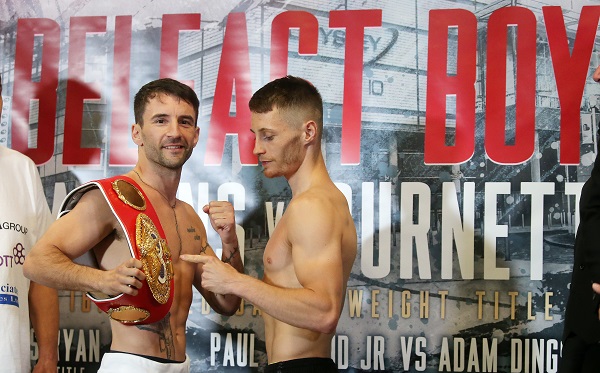 Ryan Burnett points to the IBF bantamweight title belt as Lee Haskins smiles out into the crowd during today's weigh-in at the Hilton Hotel Picture by Jonathan Porter/PressEye.com

THE formalities are over as Ryan Burnett and Lee Haskins both weighed-in comfortably under the bantamweight limit ahead of tomorrow's IBF bantamweight title fight at the SSE Arena.
A big crowd gathered at the Hilton Hotel earlier to watch champion, Haskins and challenger Burnett take to the scales with both coming in at 117 lbs, one pound under the limit and both men appeared extremely relaxed ahead of tomorrow's showdown.
Burnett was greeted with raucous cheers as he took to the stage and soaked up the atmosphere ahead of his long-awaited homecoming and he was thankful to all who turned up to lend their support ahead of his date with destiny.
"The weigh-in is done now and it's just about looking forward to the night," said the North Belfast man.
"I couldn't be more excited, we're very close now and I'm looking forward to it.
"I was always thinking how it was going to be and that was absolutely tremendous. The support I got from the people of Belfast was incredible."
Haskins was respectfully applauded as he weighed-in ahead of his second defence of the title and also looked to be enjoying the reception afforded to him by the Belfast public.
The Bristolian is supremely confident he will be taking the belt home and says he doesn't mind how he gets the job done so long as he has his hand raised.
"I'm looking forward to it, can't wait now," said the 33 year-old.
"All the hard work is done, this is the easy part.
"I didn't see anything there (in his eyes at the staredown). I just want to get in and get the job done now. This is what I've trained for so I just want to get in there now. Let's see how it goes. I'm ready put it on him, but I'm ready for anything."
As the boxers took part in the customary head-to-head photo, Haskins had some words for Burnett whose gaze was drawn to the title belt draped over the champion's shoulder.
The undefeated 25 year-old challenger said he was not paying any attention to what was being said, but simply focussing on taking the belt he has worked towards during his four-year professional career.
"I was looking at the belt and thinking 'that's going to look well over my shoulder on Saturday night'," said the man bidding to be Belfast's latest world champion.
"He was just saying the old jibbery-jabbery, but to be honest I wasn't even listening to him. I was just looking at that belt thinking 'on Saturday night that's going to looking great on my shoulder'."
Like Haskins, Burnett is supremely confident of victory and also is unconcerned as to how he achieves his goal, simply saying: "You'll see tomorrow night."