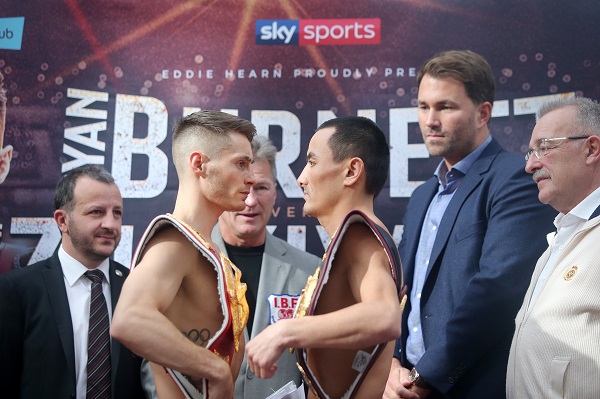 WE have a fight. Ryan Burnett and Zhanat Zhakiyanov weighed in under the limit of 118lbs at the Titanic Hotel at lunchtime ahead of their world bantamweight unification clash at the SSE Arena tomorrow night.
IBF champion, Burnett scaled 117.6lbs, three ounces heavier than WBA holder, Zhakiyanov in front of a large crowd as they get ready to do battle in the first world unification clash to ever be held on these shores.
It was a largely drama-free event, but for the antics of Renald Garrido who will box Tyrone McKenna in a light-welterweight contest. Yesterday, the Frenchman turned up to the final press conference in a tuxedo, while today, when the fighters went to pose for a head-to-head, he had changed into a Halloween costume to the amusement of all inside the impressive new hotel that was formerly the Titanic Drawing Office.
There were no such stunts as the top of the bill took to the scales. Burnett and Zhakiyanov were all business and held a brief, respectful staredown before going their separate ways.
Tomorrow's showdown doesn't really need the added hype as champion takes on champion with the winner able to make the claim he is the best in the division.
Both are also making the first defence of their respective title, but each have had the look of a hungry challenger throughout fight week.
Burnett's stock has risen considerably in his hometown since claiming the IBF strap from Lee Haskins back in June and while that could bring added pressure, he has deflected such notions.
"I don't feel any added pressure," he insists.
"If there's any added pressure it's all mental. I think if you deal with the mental side of things you're not going to put on any extra pressure on yourself and that's something I'm very, very good at, dealing with mental situations. Will there be more pressure in this fight? No, not at all."
His Kazakh opponent has displayed a poker face all week, but certainly not nerves as he is accustomed to fighting in hostile territory, so a partisan SSE Arena holds no fears for the Ricky Hatton-trained 33 year-old.
"I have had three or four months good training in Kazakhstan and England," said Zhakiyanov.
"I am happy to be in a big fight. I'm feeling good and I'm ready."
Burnett still has a little souvenir from his win over Haskins on his forehead with the nasty gash sustained in that clash still somewhat visible.
He says it is not an issue and is not at all concerned with the notion that Zhakiyanov may target that area as he sometimes has a tendency to lead with the head.
"I went and saw the doctor who took a look at it and everything's perfect," he reports.
"I've took a couple of whacks in sparring on it and I haven't even thought about it. If anything, it's perfect.
"He might possibly lead with his head, but I might lead with my head as well. Listen, we've had people in there, and their faces have been right in mine in sparring, we know exactly what to do if that situation arises. Everything's in perfect order."
The steely-focussed North Belfast man has history in his sights, but that is not something he cares for too much going into this fight.
Instead, he is just aiming to box to his full potential and be the boss on the night.
Zhakiyanov is an aggressor inside the ring, a man who is not afraid to let his hands go and has the resilience to recover from adversity, as he did in his title win against Rau'shee Warren when dropped twice in the opening round before coming back to dominate the majority of the fight to win on points.
Burnett is unconcerned about what his opponent brings to the table however and insists he will produce the answers to claim his second world title in as many fights.
"I'm not going to rely on his weaknesses, he stressed.
"It'd be immature of me to rely on his so-called weaknesses to be able to better myself. I'm not going to rely on him being a slow starter, I'll think of him as the best he can be, and if I can deal with the best he can be then I win the night."