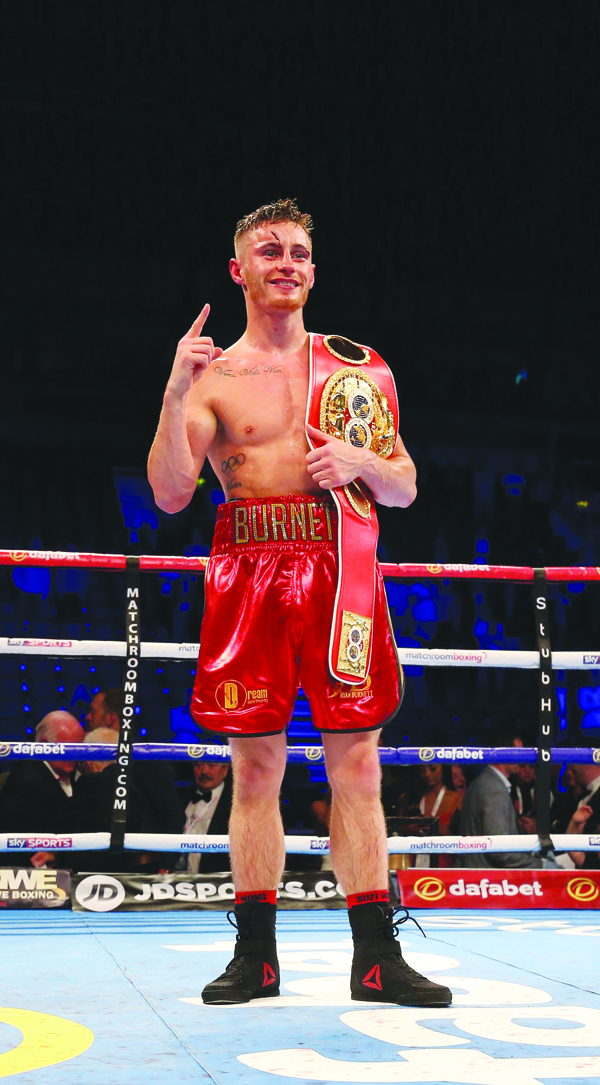 Ryan Burnett celebrates his IBF bantamweight title win against Lee Haskins in June. The Newington man will be hoping to add the WBA strap when he takes on former sparring partner, Zhanat Zhakiyanov at the SSE Arena on October 21

HAVING won the IBF bantamweight title against Lee Haskins in June, Ryan Burnett has no interest in resting on his laurels as he steps straight into a unification fight with WBA champion, Zhanat Zhakiyanov at the SSE Arena on October 21.

The Newington man proved he was world class against the experienced Haskins, dropping the Bristolian twice on his way to a unanimous decision (initially called a split decision after veteran American judge, Clark Sammartino mistakenly awarded the fight to Haskins having got the two boxers mixed up) and now he looks to become just the second ever Irish boxer to unify titles after fellow North Belfast man, Carl Frampton did the same in the super-bantamweight division with a win over Scott Quigg in Manchester last year.

Undoubtedly this is one of, if not the biggest ever fight to land on Irish shores given what’s at stake and indeed, it is the first ever unification contest to take place in the city.

It is certainly rare for a fighter to look to unify immediately after winning his first world title, but on this occasion, both men are doing just that with Zhakiyanov also making the first defence of the WBA and IBO titles he won against Rau’shee Warren on a split decision back in February after rising from the floor twice in the opening round.

There is also the added intrigue to this Odyssey blockbuster in that Kazakhstan’s Zhakiyanov is trained by Ricky Hatton who Burnett was guided by in the early stages of his career and indeed, both men have previously sparred so will have an insight into one another ahead of what is sure to be an electric night for fight fans in the city.

“This is the path I’ve always believed in and asked for – to be not just a World champion but a great World champion and this is exactly the fight that propels me into that position. I wouldn’t have it any other way.

“I’ve done a lot of work with him in sparring, but back then I was a kid and hardly had any fights and he was fighting for the European title.

“A lot has changed since we last sparred for me but not with him.

“It’s good to have that bit of knowledge, I know a few things about him. That can only work in my favour.”

Details on the undercard and tickets will be released at a press conference next week which will be announced soon.

Like any major boxing event in the city, it is sure to attract a crowd and Burnett, whose popularity in his home city continues to rise following his world title win, is delighted to be back on home soil as he looks to make history and become a unified champion in what will be just his 18th professional contest.

“The Belfast fans have really took a shine to me especially since my last fight,” added Burnett.

“Everything has taken off and I’m just looking forward to getting back to the SSE Arena with a packed house behind me.”

For Zhakiyanov, travelling to Burnett’s back yard holds no fears given his title win came away from home too and like that victory over Warren earlier in the year in Ohio, he is convinced he can silence the home support once again.

“I’ve won against all title holders that my management the 31 year-old Kazakh.

“In Switzerland in 2011, in Sheffield in against Karim Guerfi, in Vraza against Hector Guzman, in Monaco against Yonfrez Parejo and in Ohio against Warren. Ryan Burnett will not be different from what I’ve always achieved.”

Burnett’s promoter, Eddie Hearn says he is looking forward to returning to the city and savouring the unique atmosphere only the Belfast crowd generates.

Hearn was delighted with the crowd that was inside the SSE Arena for Burnett’s win over Haskins and there is no doubt many more will flock to the venue for what is quite simply a magnificent showdown and has grabbed the attention of fight fans in the city since Wednesday’s announcement.

“I'm so proud firstly to be part of history in bringing this huge unification to Belfast but also of Ryan Burnett for taking on this huge challenge,” said the Matchroom boss.

“Following his great win against Haskins for the title, it would have been so easy to come back to Belfast with a standard defence but Ryan want to be great and make history and this fight against Zhakiyanov can do just that.

“It's a brilliant fight and it's going to be a special night on October 21 – fight fans can expect an epic main event and a stacked card whether watching in the SSE or live on Sky Sports.”