Business and community in generous gesture to Hospice 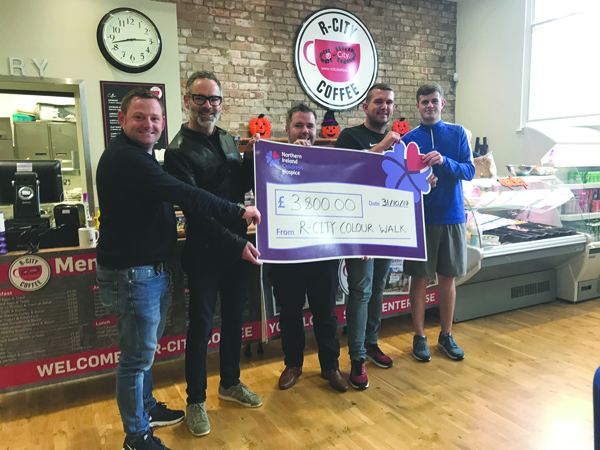 Michael Nugent, Regional Fundraiser from NI Children’s Hospice, receiving the cheque of £3800 from representatives of The Wall Group and R City at The Houben Centre

R CITY project together with partners The Wall Group are celebrating raising £3800 for the Northern Ireland Children’s Hospice.
The duo teamed up on Sunday, October 22 for a sponsored colour walk which saw people of all ages, shapes and sizes run, walk and jog around the route. Eco-friendly powdered paint was dispensed leaving all participants lightly coated in a kaleidoscope of coloured fun.
The R City project between the Hammer, Ardoyne, Clonard and New Lodge youth clubs seeks to enhance the growth and development of the young people who become part of the programme. The project aims to instil leadership qualities, helping young people on their pathway to learning and employment.
The Wall Group is Belfast’s fastest growing independent food convenience business which owns eight stores, including Spar, Subway and Yoggie Berrie. The multi award-winning group is on a mission to attract talent to North Belfast and is at the heart of the North Belfast community in which it trades.
Paul Dynes, Youth Worker and co organiser of the walk, said: “Northern Ireland Children’s Hospice is a fantastic charity and we encouraged as many people as possible to sign up and raise vital funds for the only children’s Hospice in the province.
“We were so surprised at the generosity that we received from everyone who attended which allowed us to raise £3800 for the Children’s Hospice. Everyone at R City would also like to thank The Wall group and local people who have gave so generously and got behind us.”
Michael Nugent, Regional Fundraiser for NI Children’s Hospice, paid thanks to R City project and The Wall Group for their fundraising efforts.
“On behalf of Northern Ireland Children’s Hospice, I would like to extend a huge thank you to R City and The Wall Group and to everyone who attended the sponsored walk who gave so generously for this great amount raised.
“It is fantastic to see the support that this local project has provided for the Children’s Hospice whilst developing the skills of local children. This event really put the fun into fundraising and it is only because of support like this, that we are able to continue to provide care and support to 3,500 babies, children and adults each year.”